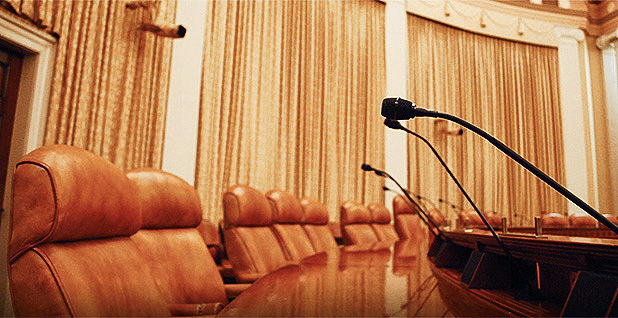 The House Ways and Means Committee is a coveted seat, a place where politicians can make their name working on issues that affect virtually every sector of the American economy.

As Democrats pin their hopes on retaking the House in November, they’re eyeing the powerful committee as a venue for their biggest promises on the campaign trail, from propping up the Affordable Care Act to re-examining the Republican tax reform passed into law last year.

And after years of GOP control and what Democrats have called an inadequate committee process, the panel could also be poised to make energy and climate change issues a bigger part of its portfolio.

"We’ll go back and do our job," Rep. Earl Blumenauer (D-Ore.), a longtime member of the committee, told E&E News. "We’ll be dealing realistically with areas of the [tax] code that impact carbon."

Democrats are increasingly optimistic about their chances in November. Even the Senate, once seen as all but sure to remain in Republican hands, now appears to be in play.

That has them thinking about how to refocus committees, in addition to more robust oversight of agencies such as EPA and the Interior Department (E&E Daily, Sept. 6).

"I think we will make up the majority on the committee in the House, hopefully in the Senate," said Rep. John Lewis (D-Ga.), a senior member of Ways and Means. "I think will be much more sensitive to the issues affecting our climate and try to do what we can to help save this planet, keep it a little greener, a little cleaner and a little more peaceful."

What, exactly, that means is a matter of debate.

Blumenauer and some other Democrats are eager to push a carbon tax as a solution for climate change, and they see Ways and Means as an important part of that discussion, since it has jurisdiction over the tax code.

Blumenauer drew a contrast between how Democrats on the committee will handle climate change and the anti-carbon-tax resolution that passed the House with nearly unanimous Republican support in July (Greenwire, July 19).

"Instead of having meaningless resolutions about imaginary legislation, we might actually have a hearing," he said. "A balanced hearing — hear from people in the business community, hear from people that are state and local, hear from environmentalists, hear from scientists, for heaven’s sakes."

Rep. Sander Levin (D-Mich.), a senior member and former chairman of the committee who is retiring at the end of this Congress, added that the way the panel operates would be "dramatically different" with Democrats in control.

In the next Congress, that would mean a bigger focus on issues such as renewable energy tax incentives, retirement and health care, he said.

And though it would be unlikely to pass a narrowly divided Senate, or be signed into law by President Trump, Levin said he expects the panel would consider a carbon tax.

"I think for the first time in years, once the Democrats take over the House, there will be serious consideration of that — at long last," he said.

Rep. Bill Pascrell (D-N.J.) said Ways and Means Democrats would take aim at the tax law, particularly its limits on state and local tax deductions, which have drawn the ire of lawmakers from high-tax states.

But if ranking member Richard Neal (D-Mass.) becomes chairman, energy and the environment will almost certainly get more airtime on the committee, said Liam Donovan, a principal at Bracewell LLP who works on energy and tax issues.

That could mean extending tax incentives for renewable energy and efficiency that were left out of the tax reform bill, though that issue may also be addressed in the lame-duck session.

Lawmakers retroactively extended those credits through the end of 2017 as a part of a budget accord earlier this year, but the temporary breaks won’t be in effect for this year. Current Ways and Means Chairman Kevin Brady (R-Texas) has opposed an extenders package, but it’s an issue that has bipartisan support (E&E Daily, March 15).

As for carbon pricing and renewable energy issues generally, "it won’t just be a Ways and Means issue," Donovan said. "It’ll be something that the party is talking about, with the understanding that it’s not going anywhere in a Republican-controlled Senate or a closely divided Senate."

But Pascrell said doesn’t think carbon pricing would be on the agenda for Ways and Means at all, primarily because it falls below other big-ticket issues on the list of priorities.

"Of course the environment is always top on our list," Pascrell said. "The record is the record. Check our votes."

Even Blumenauer acknowledged that Democrats on the committee could have a "target-rich environment," especially early in the next Congress.

He said his top priority would be figuring out how to pay for an infrastructure package that was once a popular topic on Capitol Hill coming off the 2016 elections.

"The Republicans have been in charge for 401 subcommittee and committee hearings over 7 ½ years. Four hundred one," Blumenauer said. "And in that time, there was exactly one witness who testified for five minutes on how we might finance dealing with infrastructure, and ours is the committee that has jurisdiction over that."

There are also options on the table that would marry carbon pricing and infrastructure investment.

Blumenauer introduced a bill last year with fellow Ways and Means member Rep. John Larson (D-Conn.) that would put an initial price of carbon emissions at $49 per ton and aim to invest $1 trillion in infrastructure over 10 years (E&E Daily, Nov. 8, 2017).

And a Republican member of the panel — Florida Rep. Carlos Curbelo — has his own carbon tax plan. That measure would put a $24-per-ton tax on carbon, with 70 percent of the revenue put into the Highway Trust Fund and other chunks of cash doled out to low-income households and mitigation projects.

Curbelo said he’d like to see a bigger focus on energy issues no matter which party has control come January, adding that he has asked the committee’s tax counsel to review his bill.

He acknowledged that his proposal would be more likely to get a hearing with Democrats in control.

Still, Curbelo said, "it’s already drawing a lot of interest from Republicans — people asking questions, wanting to learn more — so I also think it’s ripening on our side of the aisle, even though it has a longer way to go."

‘This is nine years later’

Complicating the agenda for House lawmakers is that any large-scale climate change or renewable energy legislation would likely struggle to garner enough votes in the Senate, much less get a signature from President Trump.

As a model of what Democrats might look to on the issues, House Minority Whip Steny Hoyer (D-Md.) pointed to the 2007 Energy Independence and Security Act, as well as renewable energy subsidies and tax credits included in the 2009 stimulus package.

But, he added, "this is not ’09. This is nine years later, so the hearings will be different, and the policies may well be different."

Hoyer said much of the climate agenda and energy for Democrats would involve intervening in the Trump administration’s regulatory rollbacks.

Lewis similarly suggested that while some Democrats are eager to advance carbon pricing legislation, leadership doesn’t want to get ahead of itself on the issue.

"I think there may be something coming out of both Ways and Means and Energy and Commerce. There hasn’t been that much discussion about it," he said.

"We don’t want to count our chickens before the eggs hatch."