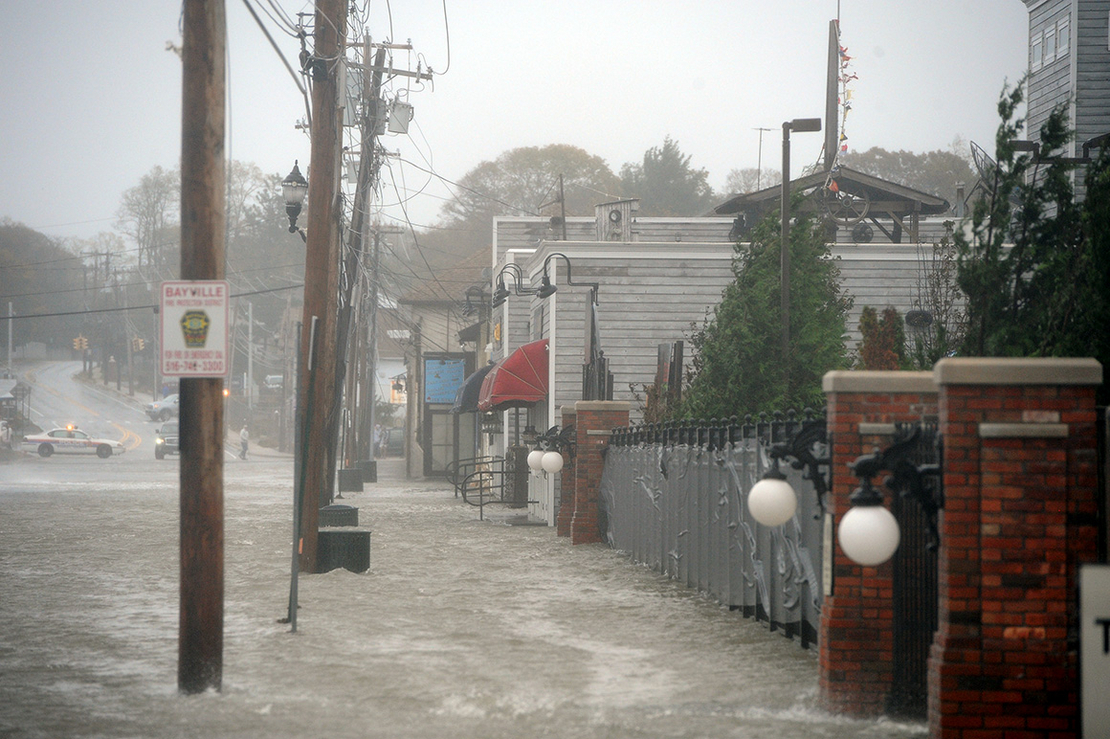 Floodwaters from Superstorm Sandy overwhelm Bayville, N.Y., in Nassau County. Part of the reconciliation package would make insurance subsidies available to households earning up to 120 percent of the median income in their area; in Nassau County, that means an income limit of $139,320. Kathy Kmonicek/Associated Press

Congressional Democrats are moving toward enacting two measures that could vastly expand access to flood insurance and give communities a more accurate picture of their flood risk through better maps.

The other item provides $3 billion to improve the federal government’s flood maps, which show areas of the country most at risk of flooding but which in some cases are more than 15 years old and do not reflect a community’s current or future flood risk.

“This is unprecedented,” Natural Resources Defense Council climate attorney Joel Scata said of the money for flood maps. “This really does take to heart the needs of mapping and try to right a wrong from past underfunding of the mapping program.”

The $3 billion is twice as much money as Congress has allocated for flood mapping in the past seven years combined.

Forbes Tompkins, head of Pew Charitable Trusts’ resilient infrastructure program, called the $3 billion a "historic investment” and said the money along with the insurance subsidies “really speak to an uptick in prioritization of the need to address flood risk.”

The flood provisions are small parts of a budget reconciliation bill the Financial Services Committee passed featuring $322 billion in new housing assistance. The bill, which all committee Republicans opposed, is part of Democrats’ $3.5 trillion budget reconciliation package that focuses heavily on climate change.

“It’s a reasonable thing to seek to address. There are people who cannot pay risk-based rates,” said R.J. Lehmann, a flood insurance expert at the International Center for Law & Economics.

The House proposal calls for “graduated discounts” on insurance premiums based on household income, and would limit eligibility to households earning up to 120 percent of the median income in their area.

In New Orleans, the income limit would be $49,925 based on current Census Bureau data.

The affordability of flood insurance has been an issue since FEMA reported in 2018 that nearly 1.7 million of the 5 million households with NFIP policies earn less than 85 percent of the median income in their area. The average flood insurance policy in a high-risk flood zone costs about $1,100, which includes both the annual policy premium and fees, though costs can be much higher depending on the precise location of a home.

The $3 billion for flood mapping would help FEMA redraw out-of-date maps and create maps for vast swaths of the Great Plains and Rocky Mountain West that have no flood maps.

FEMA’s flood maps are crucial documents that help local officials steer development away from flood-prone areas — but the maps become inaccurate in just a few years as development changes flood patterns. A 2012 law required FEMA to incorporate future conditions such as climate change in its flood maps, but the agency has never done so, citing financial restraints.

“We are making development decisions about where and how to build using the maps. We want to make sure information is current,” said Scata of NRDC.

The $3 billion represents the minimum amount needed to update the nation’s flood maps, according to a report last year by the Association of State Floodplain Managers, which said an updated program could cost as much as $12 billion.

FEMA has acknowledged shortcomings, telling lawmakers last year that inaccurate maps “may give a false impression” to people who live outside a FEMA-mapped flood zone that they are safe from flooding.

The $3 billion proposal “is an indicator that better understanding flood risk and making that information available to Americans across the country is becoming more of a priority,” Tompkins of Pew said. “This could go a long way toward increasing information about flood risk to reduce future damages, loss of life and taxpayer costs.”

Another flood-related provision in the Financial Services bill would forgive $20.5 billion that federal taxpayers loaned FEMA’s insurance program to pay for the huge claims after Hurricanes Harvey, Irma and Maria in 2017. The loan was needed because the insurance program did not have enough money from insurance premiums to pay all the claims.

Some people such as Lehmann, the insurance expert, wanted the debt to force FEMA to make its insurance program better able to sustain itself.

The proposed debt forgiveness “is significant in that it amounts to declaring surrender on significant NFIP reform that looks to address the structural issues of the program — that it does not raise enough money and subsidizes developments in risky, environmentally sensitive regions,” Lehmann said.