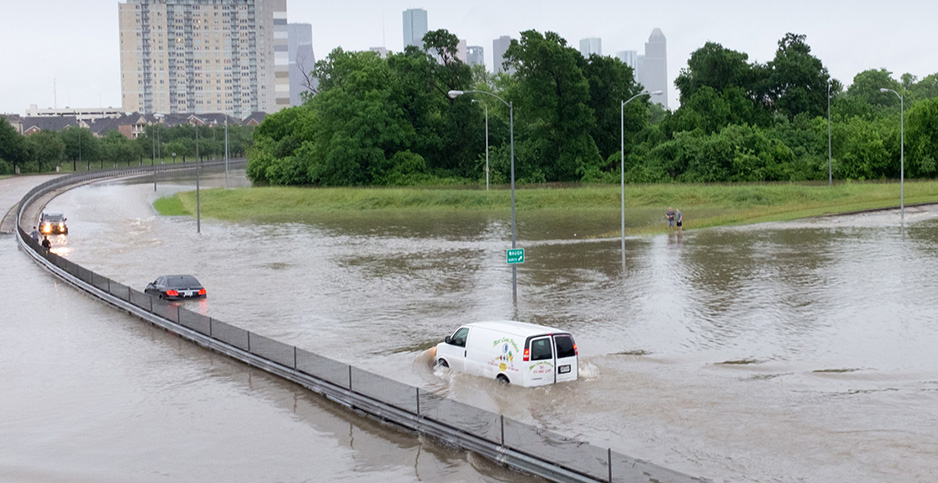 A road in Houston was flooded during record rainfall in 2016. NOAA

As infrastructure talks progress on Capitol Hill, Democrats are calling for any legislative package to address climate change.

That would have been unthinkable last year, when Republicans controlled both chambers of Congress.

Indeed, when President Trump initially proposed his $1 trillion infrastructure plan last year, it sparked little discussion about global warming. And the plan ultimately failed to materialize due to disagreement over funding options.

But momentum is again building for an infrastructure package to materialize by late spring. And now that they have a majority in the House, Democrats are increasingly vocalizing the need for it to address the climate crisis (E&E Daily, March 7).

"The benefits of highway infrastructure investment will be impeded — if not downright nullified — if we don’t address the threats of climate change and extreme weather events that are increasingly disrupting our nation’s transportation system," Sen. Tom Carper (D-Del.), the ranking member on the Environment and Public Works Committee, said last week at a hearing on highway infrastructure investment.

There are a couple of big hurdles: figuring out exactly what incorporating climate change into an infrastructure bill would look like and shaping the package in such a way as to garner support among a Republican Party that’s suspicious of progressive climate policies like the Green New Deal.

Democrats and their allies in the environmental community have proposed a wide variety of climate components that could be tucked into a broad bill, from resilience to electric vehicles to energy efficiency.

Rep. Peter DeFazio (D-Ore.), chairman of the House Transportation & Infrastructure Committee, is quick to rattle off a laundry list of suggestions.

"There’s issues of looking toward decarbonizing transportation, the largest contributor … to carbon pollution," DeFazio told reporters last week. "I believe the solution is going to be electrification. So I’d like, in the longer-term bill, to look at how we are going to set up an electric backbone to support the future transportation needs of the country."

The Oregon Democrat then pivoted from electric vehicles to resilience. "We have to build infrastructure that’s resilient," he said, adding, "We have to, you know, look at how we are going to protect the existing infrastructure from sea-level rise."

Rep. Jared Huffman (D-Calif.), a member of the T&I Committee, also ticked off a long list of proposals in an interview.

"I think both aspects of climate change need to be reflected," Huffman said. "The decarbonization imperative can be advanced by investing in clean energy, grid modernization, public transportation and other things that can help us reduce greenhouse gas emissions."

He continued, "But then the adaptation side, obviously, is going to require … some reimagining of infrastructure. When you think about coastal resiliency, for example, the idea that we’re just going to continue building sea walls and things like that is primitive and not very effective and really expensive."

There are a plethora of ideas off the Hill, too.

Shannon Heyck-Williams, NWF’s director of climate and energy policy, said the group’s strategy involves pushing a wide array of proposals, some of which hold different appeal for different lawmakers.

"We can’t wait for the stars to align for the perfect solution," Heyck-Williams said. "We have to take every opportunity we can now to make progress."

On the other hand, the American Society of Civil Engineers — which recently issued a report card giving the nation’s infrastructure a grade of D+ — is focusing on the overarching goal of resilience.

"We think the money that is going to be allocated needs to be spent in a more sustainable and resilient fashion," said Brian Pallasch, ASCE’s managing director of government relations. "The notion that we build infrastructure to be able to adapt to the changing climate is terribly important."

The push to include climate change in an infrastructure package largely began in December with an opinion piece penned by Senate Minority Leader Chuck Schumer (D-N.Y.) in The Washington Post.

The piece marked one of Schumer’s most aggressive stances on climate change since assuming his leadership role, and it provided an early litmus test for any infrastructure bill in this Congress (E&E Daily, Dec. 7, 2018).

Still, Republicans have rarely — if at all — brought up climate change during the spate of infrastructure hearings in the 116th Congress. They’ve tended to focus instead on streamlining the permitting process for large projects.

That’s led to some tension at times.

At a T&I hearing last month, Vice Chairman Salud Carbajal (D-Calif.) stressed in his opening statement that the purpose of the hearing was not to debate the Green New Deal but rather to examine how federal infrastructure policy could help mitigate and adapt to climate change.

"I suspect many on both sides of the aisle will want to spar over the Green New Deal," Carbajal said. "But it is not what we are here to do today. If you want to debate underlying arguments or ideas of the Green New Deal, this is not the venue."

"We don’t have to live in a fairy tale, and that’s where ideas like the Green New Deal come from," Graves said. "There’s no other way to describe this idea to completely make over our transportation network."

Asked whether Republicans might object to climate change language in infrastructure legislation, Huffman was adamant. "We can call it whatever they want, but we have to do all of these things," he said. "We just do. So I am less concerned about their comfort level and more concerned about the imperative of getting these things done."

Some observers think Republicans in areas hit by extreme weather may support climate components if they’re framed in terms of resilience.

"In our conversations, I think there’s a growing understanding that building infrastructure in a more resilient fashion is a good use of taxpayer dollars and the right way to ensure better infrastructure for the future," said Pallasch of the American Society of Civil Engineers. "I have found that not to be a partisan discussion."

Indeed, at the T&I hearing last month, Rep. Daniel Webster (R-Fla.) noted that his state had recently seen wild swings in temperature, which could threaten the structural integrity of roads and bridges.

"In some places, there’s going to be a need for some sort of resiliency," Webster said.

There have also been recent signs that Republicans are willing to engage on climate change. For instance, GOP members of the House Energy and Commerce Committee are shifting from climate denial toward developing their own message on the issue (E&E Daily, March 7).

"There’s a recognition in the Republican Party that stepping forward on solutions to climate change is frankly overdue," said the National Wildlife Federation’s Heyck-Williams. "It hasn’t really been an area of priority for the party in some time. And I think it is getting there again."