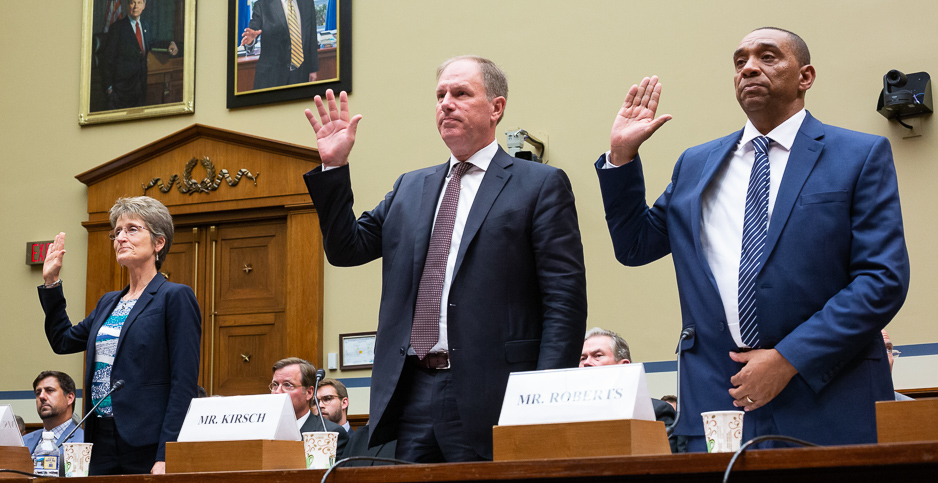 Democrats grilled representatives of several major chemical companies about their roles in the widespread contamination of toxic substances found in air, drinking water, food and people.

Yesterday’s House Oversight and Reform Subcommittee on the Environment hearing was the first time the major producers of a class of nearly 5,000 chemicals known as PFAS sat before a congressional hearing.

Per- and polyfluoroalkyl substances were championed for their nonstick properties in cookware and use in firefighting foam. Studies now link them to health problems such as thyroid issues, birth defects and some cancers.

"These companies with us here today have screwed up, and we need to hold them accountable for doing so," said subcommittee Chairman Harley Rouda (D-Calif.). "I hope the people representing those companies today will admit their mistakes so we can all move forward."

All said they support working with Congress to address PFAS contamination and back proposed provisions in versions of the fiscal 2020 National Defense Authorization Act, such as setting a national drinking water standard for PFAS.

"We encourage Congress to take swift action to enact these proposal," Roberts said in his prepared testimony, which also described his company’s long history and complicated ties to PFAS.

Rutherford said, "As a society, we should be optimistic that, by bringing multiple parties and viewpoints together, we can facilitate a broader, more inclusive dialogue to make meaningful progress toward a comprehensive PFAS strategy."

Lawmakers also heard from two attorneys who filed class-action lawsuits against the companies and won, including Rob Bilott, who sued DuPont on behalf of a West Virginia farmer.

Bilott also filed a class-action lawsuit against DuPont and Chemours on behalf of thousands of people who were exposed to PFAS in drinking water.

As part of that suit, Bilott and DuPont created a panel of independent scientists in 2004 to determine the chemicals’ impacts.

The data analyzed more than 69,000 people and found that drinking water contaminated with PFAS was linked to six different health effects, including two types of cancer. DuPont agreed to pay more than $600 million in 2017.

Subcommittee ranking member James Comer (R-Ky.) said he was skeptical of Bilott’s litigation because he said he tends "to believe that sometimes the trial attorneys make things last longer" so they can make more money.

Comer asked Bilott how much money he and his firm made from the lawsuit against DuPont and asked what his royalties would be on his upcoming book about his 20-year legal battle with the chemical company.

Rep. Jackie Speier (D-Calif.) shot back, arguing that President Trump has had books written by ghostwriters, and "I don’t see us asking him how much royalties he’s getting from that."

"If I’m not mistaken, we have companies here who deliberately chose not to reveal very negative information about PFOS that they were selling and chose to hide it from the American people," she said. PFOS and PFOA are two types of PFAS.

Democratic lawmakers continued to express their frustration with the executives during the hearing, especially when Rutherford denied there is scientific evidence that shows PFAS caused any "adverse human health effects."

Rep. Dan Kildee (D-Mich.) said that claim was "ridiculous" because 3M phased out the use of PFOS and PFOA, which are typically found in firefighting foam and are believed to damage the liver and other organs.

"There is plenty of science out there to demonstrate these are harmful chemicals and dangerous for consumption; otherwise, you wouldn’t have taken them off the market in the first place," Kildee said.

Rutherford said the data is too inconsistent to make the statement that PFAS is harmful and that additional testing is needed.

Rep. Debbie Wasserman Schultz (D-Fla.) asked the companies whether they believed PFAS should be designated as toxic substances under the Superfund law, which would hold the companies accountable for cleaning up contamination. The House version of the NDAA includes such language.

Rutherford from 3M said no, and Kirsch from Chemours refused to answer the question. DuPont’s representative, Roberts, said the company only agreed to designating PFOS and PFOA under Superfund but not the whole PFAS class.

PFAS defenders say some of the chemicals remain important for consumers and that a toxic label could complicate cleanups.

Wasserman Schultz said executives who do not agree with designating PFAS as hazardous are contributing to the problem of contamination across the United States.

"You are playing into our national emergency," she said. "You have sickened our first responders and our members of our military, and I don’t know how you sleep at night."