Dems slow to search agency records for dirt on Trump 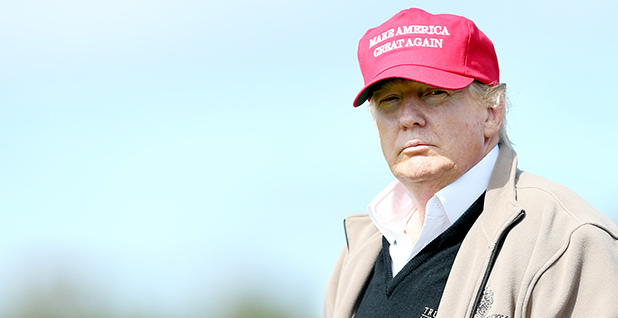 Democratic groups were slow to begin investigating the environment and energy record of Republican presidential front-runner Donald Trump, according to an E&E Daily analysis of federal open records requests.

The delay, records suggest, could make it harder for Democrats to effectively criticize the environmental record and actions of Trump and his various businesses.

The Democratic National Committee and the American Bridge 21st Century, a top liberal opposition research group, only began making targeted inquiries in mid-January for communications that Trump, his associates and companies have had with nearly a dozen environment and energy agencies.

At that point — just weeks before the Iowa caucuses — the billionaire real estate magnate and reality TV star had been leading in the national polls for seven months.

Trump is currently at or near the top of the polls in all five states that have Republican primary contests today. (No polling on the race has been done in the Northern Mariana Islands, which is set to caucus, as well.) Victories in either Florida or Ohio — delegate-rich, winner-take-all states that other GOP contenders are banking on — could put Trump on a one-way street to the Republican presidential nomination.

By comparison, the DNC and American Bridge began collecting information through the Freedom of Information Act on former Texas Gov. Rick Perry, Wisconsin Gov. Scott Walker and Indiana Gov. Mike Pence as early as February 2015. Perry and Walker were the first major GOP presidential candidates to withdraw from the race, while Pence decided against making a run.

"It is a little surprising that it took them so long to get around to Trump. Maybe it reflects a disbelief or negligence on their part," said Steven Aftergood, an expert on FOIA requests at the Federation of American Scientists. "But as the presumptive front-runner in the Republican race, he is obviously a subject of interest for Democrats."

The federal FOIA request logs that E&E Daily surveyed date back more than two years and cover agencies ranging from the powerful departments of the Interior and Energy and the White House Council on Environmental Quality to small scientific bureaus or offshore safety regulatory bodies.

The logs include requests from both parties, although Democratic groups have filed for far more information from many more environmental agencies than their Republican counterparts. That is partially a reflection of the broader GOP field this campaign, but could also suggest a more scattershot approach to opposition research, FOIA experts said.

What all partisan opposition researchers hope to find, according to Aftergood, is "ammunition that can be used against their opponents or material that can embarrass them." Some examples he cited include remarks made "with unusual candor" and inconsistencies between the candidates’ public policies and behind-the-scenes actions that can then be turned into attack ads or other political messaging.

In the hands of seasoned campaign operatives, such information is "usually taken out of context to such a degree that it’s not very reliable or meaningful," he added. "But it can still be politically potent."

The first Democratic FOIA request for information on Trump’s environmental record appears to have been filed at the end of last August with U.S. EPA.

But the inquiry, from a DNC research assistant, was so broad that EPA still hasn’t finished processing it. The request called for "any and all records of communication … between your agency," Donald Trump and 13 other GOP presidential candidates, most of whom are now out of the race.

On Jan. 25, just seven days before more than 24 percent of Iowa’s Republican caucusgoers supported Trump, Dillon made a narrower request for "any and all records … regarding Donald Trump and business associates," the Interior Department log says. The same day, she made similar filings with the National Park Service, DOI’s Office of Inspector General and its scientific bureau, the U.S. Geological Survey (USGS).

DNC spokesman Mark Paustenbach would not say if any of the requests have yet produced any responsive records and declined to comment on the reason it took so long to ask for those documents.

American Bridge, which is legally barred from coordinating with the DNC and other Democratic campaign committees, got a slightly quicker jump on digging into Trump’s communications with environmental agencies. On Jan. 12, Abraham Payton, the Democratic group’s research director, made two targeted filings with the Interior Department.

The first asked for "copies of all incoming-and-outgoing constituent correspondence between DOI and elected, public officials which makes direct mention of ‘Trump’ from 1999 to the present." The agency’s log shows that it filled that request 16 days later.

The second sought communications between Interior officials and a list of Trump businesses and their legal and lobbying representatives over the same time period. The logs obtained by E&E Daily don’t indicate if Payton has received a response to that yet, and American Bridge spokesman Ben Ray declined to comment on the status of the request.

Payton made two similar filings with EPA for Trump business correspondence on Jan. 12, as well. But the agency hasn’t even begun processing those requests.

American Bridge, however, was concerned about other Republican presidential hopefuls much sooner.

Payton collected information on the environmental records of Walker, Pence and other Republican governors, as well as some GOP lawmakers who were rumored as potential presidential candidates at least six months before Sen. Ted Cruz (R-Texas) announced his bid in March of last year — the first major candidate of either party to do so. The Energy Department logs don’t indicate if that massive August 2014 request was ever filled.

Ray defended American Bridge’s belated requests for the GOP front-runner’s communications with environmental agencies by noting that its opposition research is not just focused on FOIAs or green policies.

"We began comprehensive work on Donald Trump in July of last year, to include state, local, and federal document collection and worked to develop our research in accordance with our needs and those of our partners," he said in a statement. Trump entered the race on June 16, and, Ray noted, Politico reported on July 17 that American Bridge had requested the candidate’s correspondence with the Securities and Exchange Commission and the Federal Aviation Administration.

GOP groups, on the other hand, have been seeking the communications that Democratic presidential front-runner Hillary Clinton has had with a broad swath of environmental agencies since May 2015, a month after she officially announced her candidacy.

Many FOIA requests from the Republican National Committee and America Rising — the conservative counterparts of the DNC and American Bridge — have targeted emails Clinton and her close aides may have exchanged with environmental agencies during her time as secretary of State from 2009 until 2013.

That is partially a response to the difficulty they’ve had getting information from the backlogged Department of State. For instance, America Rising spokesman Jeff Bechdel said his group first requested emails between Clinton and longtime staffer Huma Abedin in the summer of 2014 after Politico reported that Abedin did outside work for a political intelligence firm while still employed by the government.

"The State Department has been stonewalling on granting that information, at this point for years," Bechdel said.

Republicans’ interest in Clinton’s State Department communications only grew when The New York Times broke the news that all of her emails at the agency had been stored on a private email server (Greenwire, March 3, 2015).

The RNC has since filed nearly 20 records requests to environment and energy agencies for emails from Clinton or her aides, according to records provided by the party. These include filings with three agencies not included in E&E Daily‘s analysis: the National Nuclear Security Administration, Nuclear Regulatory Commission, and Pipeline and Hazardous Materials Safety Administration.

But RNC Research Director Raj Shah said "the number of filings, from my perspective, is sort of like a random category, in terms of measuring how deep or expansive the research effort is."

E&E Daily‘s review of agency logs found that the DNC has made more requests overall on potential presidential opponents than Republicans. But many of those Democratic filings were never likely to be of much use.

For instance, one request sent last February from a DNC research associate to the Bureau of Safety and Environmental Enforcement sought "all communications for Scott Walker" since 1993. The following month, the same researcher filed a similar request with the USGS.

Why the Wisconsin Republican governor would have been emailing an offshore oil and gas regulator or the Interior Department’s scientific bureau — especially that far back, when email wasn’t even widely being used — is unclear.

"I think there is a better than even chance that they are a waste of time, but it is cheap and easy to submit a FOIA request," Aftergood, the FOIA expert, said of such requests. "It doesn’t take more than 90 seconds, in many cases."

At the same time, though, filings like that can have real negative impacts on other targeted requests for information — from journalists, members of the public or the party groups themselves.

"Even though it can cost the receiving agency hundreds of dollars to reply even to a trivial request, the economics of the process favor the requester," Aftergood said. "It encourages frivolous requests, drives up cost to the taxpayer and generates delays in response to other requests."