Dems swept the Midwest. Why hasn’t it helped clean energy? 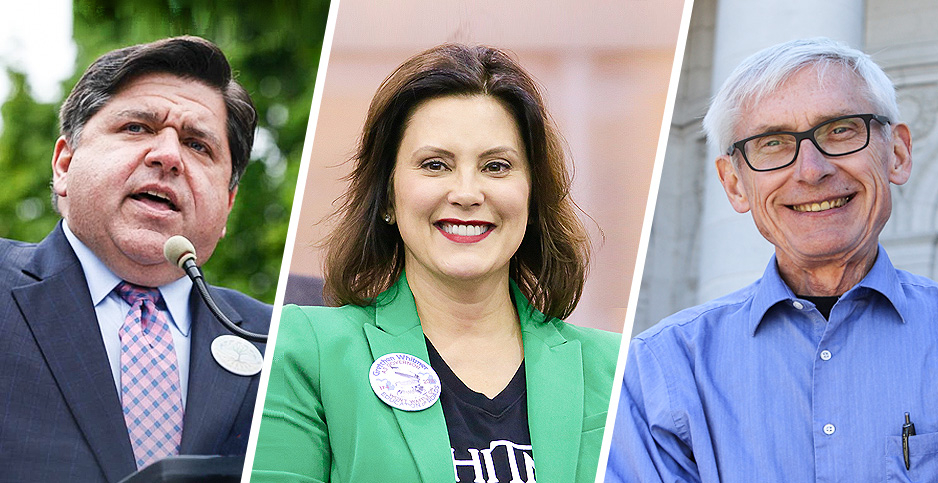 New Democratic governors were sworn into office in three Great Lakes states almost exactly a year ago, each promising action on climate and clean energy.

So far, none of the new Midwest Democrats has delivered on bold policies like 100% carbon-free energy, unlike their peers in deep-blue states like New Mexico, New York, Nevada, Maine and Washington. And a rebirth of last decade’s Midwest Greenhouse Gas Reduction Accord hasn’t yet been revived (Climatewire, Nov. 9, 2018).

Instead, like electrons on the power grid, the governors have independently traveled the path of least political resistance to get things done on energy and climate, some having to go around — not through — GOP-controlled legislatures and staying focused on big ticket issues and crises that got them elected.

"It’s very easy to say they should have done more," said Samantha Williams, Midwest regional director of the Climate and Clean Energy Program for the Natural Resources Defense Council. "But you cannot overemphasize enough what it takes to undo years of climate inaction from a leadership level."

Much of the new governors’ actions so far has involved establishing a foundation for future actions by reorganizing state agencies and making key appointments. They’ve also taken symbolic actions like signing onto the U.S. Climate Alliance, a coalition of governors focused on reducing greenhouse gas emissions.

Williams said those actions set a new tone for climate and clean energy in the Midwest, a region historically dominated by coal, adding that "in 2020, we do need to see those commitments turn into action."

Barry Rabe, a professor at the University of Michigan who studies state climate policy, agreed that each of the governors puts a stake in the ground on climate policy. He also acknowledged that each also faces headwinds on making progress.

"These are all three governors that are very interested in increasing the visibility of their states on climate change," Rabe said. "But they face limits."

In Michigan and Wisconsin, those limits start with GOP-controlled legislatures that largely oppose any kind of mandate, including renewable energy standards. Evers, especially, has clashed with Republican lawmakers during his first year in office.

In Illinois, where Democrats have majorities in the House and Senate, the obstacle for Pritzker isn’t partisanship but a fiscal crisis. The billionaire, who defeated incumbent Bruce Rauner (R), inherited a $7.5 billion deficit and pressure to fix crumbling infrastructure and address rising pension costs.

"Pritzker inherited the biggest fiscal mess in the country," Rabe said. "How much can a governor do" in light of that?

While Pritzker signed an executive order in his first weeks in office committing the state to the Paris climate agreement goals, he’s been vague on his campaign pledge to help transition the state to 100% renewable energy and hasn’t publicly backed any of a handful of energy bills awaiting action by the Legislature.

Instead, Learner said Pritzker’s focus has been raising Illinois’ minimum wage; a $45 billion capital bill to repair bridges, roads and schools; passing a budget; and getting income tax reform on the 2020 ballot.

But he said the governor’s EPA did play a key role in changing the trajectory of an environmental rulemaking that began under his Republican predecessor.

Ultimately in that case, Vistra Energy Corp. agreed to voluntarily shut 2,000 megawatts at four coal-fired power plants in southern Illinois by the end of last year in exchange for flexibility in how it operates the rest of its fleet (Energywire, June 21, 2019).

"I’m a policy guy, but sometimes you’ve got to count megawatts and tons [of carbon]," Learner said. And 2,000 MW of coal generation being retired is "serious progress."

While not a headline campaign issue in Michigan, energy was a key theme for Whitmer. And like Pritzker, she took office with promises to fulfill, starting with her pledge to "fix the damn roads," which was her campaign mantra.

Within her first month, Whitmer signed an order restructuring the state’s environmental agency in the wake of the Flint water crisis to tackle drinking water and climate. The move included rebranding the Michigan Agency for Energy, an office established by former Gov. Rick Snyder (R), as the Office of Climate and Energy, led by Brandy Brown.

She ordered a statewide review of energy infrastructure in the aftermath of January’s polar vortex when a fire at a utility compressor station interrupted the flow of natural gas during the coldest night in 25 years (Energywire, Feb. 1, 2019), established a task force to explore energy issues in the state’s Upper Peninsula and in October announced the MI Power Grid initiative to help guide Michigan’s energy transition.

Perhaps the governor’s most impactful action, though, was the appointment of two clean energy champions to form a new majority on the three-member Public Service Commission, which regulates Michigan’s two big investor-owned utilities.

It’s typical for new governors to reorganize state agencies and appoint new leaders to run them, especially when there’s a change in political party. But observers say Whitmer’s appointments lay the groundwork for bolder action on clean energy and climate.

"We now think she’s poised to take the next step," NRDC’s Williams said.

Williams is hopeful that next step for Whitmer could help the state move away from fossil energy, both in power generation and transportation, through an economywide carbon reduction policy like in California and New York.

In Wisconsin, Evers declared in a speech soon after taking office that "science is back" in the Badger State — a reference to efforts by his predecessor, Scott Walker (R), to scrub any references to "climate change" from the state documents and websites (Energywire, Jan. 22, 2019).

Evers — who campaigned on issues of schools, roads and health care — included in his budget a statutory goal of making all of the energy produced in Wisconsin carbon-free by 2050. But the GOP-controlled Legislature stripped the provision, along with many others.

Rebuked, Evers months later laid out the same goal, though no specifics on how he’ll fund it, in an executive order and established a new Office of Sustainability and Clean Energy. In October, he formed a 30-member climate change task force.

The task force is led by Lt. Gov. Mandela Barnes (D), who hosted the first task force meeting in late December just after he returned from the U.N. climate talks in Madrid. It is tasked with developing a list of policy recommendations by August.

"There was a time when Wisconsin was a national leader [on climate]," Barnes told the gathering. "We lost that ranking. We lost that place. But this is our moment to get it back."

Like Whitmer, Evers has also sought to put his stamp on the state’s three-member Public Service Commission.

Evers appointed a new commissioner, Rebecca Cameron Valcq, and made her chairwoman. And he rescinded his predecessor’s appointment of Commissioner Ellen Nowak among dozens of other Walker appointees in March based on an appellate court ruling that the Legislature’s confirmation during a December lame-duck session was illegal.

Nowak would get her job back weeks later, cementing Republicans’ 2-1 majority on the PSC, after the Wisconsin Supreme Court overturned Evers’ decision to rescind her appointment and those of more than a dozen other state workers (Energywire, May 2, 2019).

An underlying lawsuit in the case is still pending.

Next steps or new scandals?

Each of the three Democrats will trumpet accomplishments and lay out 2020 policy priorities later this month in State of the State speeches.

While Evers and Whitmer haven’t telegraphed their next steps on climate and energy beyond carrying out programs through state agencies, Pritzker has already laid out a goal of moving clean energy legislation through the General Assembly this spring.

The Illinois governor, who figures to play a key role in negotiations, hasn’t endorsed any of a few competing bills, a couple of which would boost the existing 25%-by-2025 renewable portfolio standard and aspire to put the state on a path to 100% carbon-free energy by midcentury (Energywire, Sept. 17, 2019).

And while there’s plenty of partisan support behind efforts to advance wind and solar energy in Illinois, there’s also a dark cloud hanging over the Statehouse — a brewing scandal that could slow, if not altogether stop, legislation from moving.

Pritzker’s press secretary said in an email statement that the investigation underscores the need to ensure public confidence in the legislative process. State legislators have likewise called for more information on the investigation before lawmakers do anything on energy policy.

Said Learner: "Nobody wants to hammer out a deal in the backroom and later find out the person you hammered out a deal with is indicted."

Also on the horizon is November’s election, which could also have a big impact on climate and energy policy.

A Democratic sweep this fall in particular would have big implications for how Democratic governors approach climate and energy. "Politically, it enables a Democratic governor and shifts the focus for policy back to the federal level," said the University of Michigan’s Rabe.

Meanwhile, another Trump win or two more years of a deeply divided Congress and states "remain heavily in the game," he said.