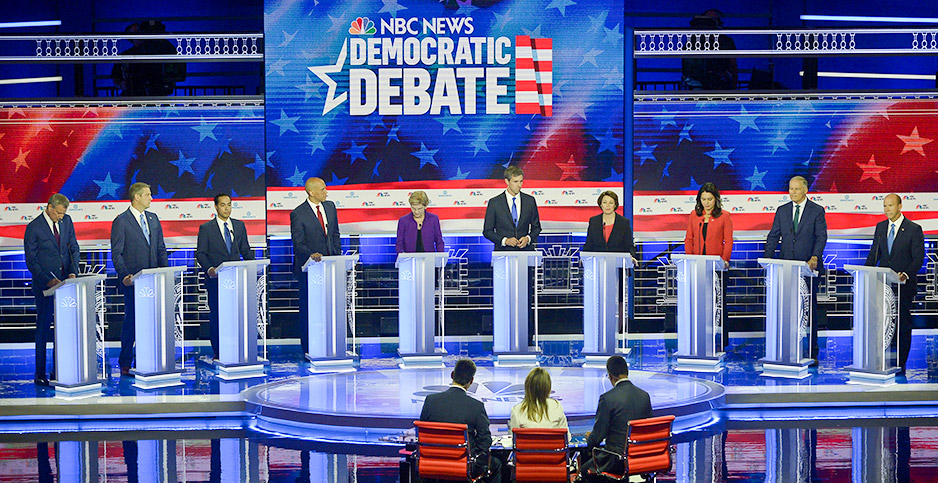 It wasn’t quite a grand entrance, but the first 2020 presidential primary debate last night showed that climate change — at least for the moment — has the attention of the Democratic field.

The issue merited several questions from the debate moderators, and a few candidates even managed to sneak in climate-related answers when asked about other topics.

The U.S. economy is "doing great for giant oil companies that want to drill everywhere — just not for the rest of us who are watching climate change bear down upon us," said Sen. Elizabeth Warren (D-Mass.) in response to the first question of the night, which was about how her progressive platform might affect workers.

The focus on global warming likely won’t be enough to assuage environmentalists, who have demanded that Democratic leaders hold a climate-only debate.

And there was little or no mention of the Green New Deal, a broad plan being pushed by climate activists that would fight global warming with a government-led jobs program.

"A measly 9 minutes about the greatest existential threat of our lifetimes, with lame questions and mostly non answers from 4 out of 10 candidates," wrote Varshini Prakash, executive director of the Sunrise Movement, which has pushed the Green New Deal, in a Twitter post. "I really, truly, perhaps naively, thought this time would be different."

Still, last night’s debate — the first part of a two-day event — was further proof that climate change is growing in political potency, even if it didn’t reveal too many new details about how the Democratic field would address the challenges of a warming planet.

Going into the two-hour debate, Washington Gov. Jay Inslee was the candidate to beat on this issue. Inslee has made climate change the central plank of his campaign — so much so that moderator and MSNBC host Rachel Maddow joked with Inslee right before she asked him a climate-related question.

"Governor, you’re going to be happy with where we go," she told Inslee when he tried to interject on a previous question.

Maddow asked him how his plan would save Miami, a city that already is dealing with rising sea levels and — coincidentally — playing host to the two nights of Democratic debates.

Inslee answered broadly, though his campaign has unveiled several detailed proposals that range from a domestic fee on climate pollution to a change in U.S. posture abroad.

"We are the first generation to feel the sting of climate change, and we are the last that can do something about it," said Inslee, who later added that he was "surprised" he’s the "only candidate who’s made this commitment to make [climate change] the top priority."

At another point, Inslee reiterated his pledge to do away with the Senate filibuster to help advance a climate agenda. And he even took a shot at President Trump, who recently tried to connect wind turbines to cancer, despite a lack of scientific evidence.

"Donald Trump is simply wrong. He says wind turbines cause cancer," Inslee said. "We know they cause jobs, and we know that we can put millions of people to work in the clean energy jobs of the future."

But Inslee, who shared the stage with nine other candidates, wasn’t alone in highlighting the issue. Four of the candidates, Warren included, named climate change as the top threat facing America.

Both Warren and Rep. Tim Ryan (D-Ohio) discussed ways to combat global warming through the lens of U.S. jobs.

The caveat, though, was that companies that use that research to make products would have to build them in the United States. "We should be the leaders and the owners," she said.

Former Rep. Beto O’Rourke (D-Texas) is one of the few candidates to have released a detailed climate plan, and last night, he touched on some of the highlights, such as a massive investment in the green economy.

"We are going to free ourselves from a dependence on fossil fuels," he said (Climatewire, April 30).

Former Housing and Urban Development Secretary Julián Castro pointed to the importance of helping vulnerable climate communities, such as those in Puerto Rico still recovering from Hurricane Maria. "My first visit after I announced my candidacy wasn’t to Iowa or New Hampshire — it was to San Juan, Puerto Rico, because … if I’m elected president, everybody will count," he said.

And former Maryland Rep. John Delaney touted his own support for a carbon tax. "All the economists agree that a carbon pricing mechanism works," he said. "You just have to do it right."

While unprecedented, last night’s one-upmanship over climate was months in the making.

Since last fall, environmental activists have worked to turn climate change into a top-tier issue in the 2020 Democratic primary.

Their campaign began a week after the 2018 election, when protesters with the Sunrise Movement stormed the offices of Rep. Nancy Pelosi (D-Calif.) — who at the time hadn’t even locked up enough Democratic support to ensure her return as House speaker.

More than 50 activists were arrested, but the episode put both the Sunrise Movement and the Green New Deal on the national radar (Climatewire, Nov. 14, 2018). And somehow they stayed there.

In the weeks and months following that protest, the Sunrise Movement kept up the pressure, despite a few setbacks. For example, the group wanted Pelosi to create a House committee whose sole goal would be to draft plans for a Green New Deal.

That didn’t happen, but Pelosi did agree to form a special climate change committee, which began meeting earlier this year. And — in another nod to the issue — House Democrats passed a climate messaging bill in May that reinforced support for the Paris climate accord.

By themselves, both actions are meaningless. But they point to a growing acknowledgement among Democratic leaders that climate change is an important issue to their voters.

It’s a recognition that has been reinforced by the Democratic presidential field.

At the start of the year, the plan was still in its infancy. Even now, details remain nebulous. While it didn’t merit a mention last night, 12 senators — including six White House aspirants — signed on as co-sponsors in February and March.

The rush to support the Green New Deal appears to have set a tone, too.

Several presidential candidates — from O’Rourke to Sen. Michael Bennet (D-Colo.) — have released detailed plans to fight climate change. That’s in spite of the fact that the race has just started.

The attention has created a chicken-and-egg effect on the Democratic electorate. Poll after poll has shown that global warming is now a top-tier issue for Democratic primary voters, and activists have warned that the candidates had better pay attention to that fact.

"No candidate for president should take the debate stage — especially in a frontline community like Miami — without discussing how he or she will address this crisis on day one and really throughout every day of their presidency," said Pete Maysmith of the League of Conservation Voters.

Indeed, the drive by environmentalists to highlight climate change reached such a level this spring that many demanded that Democratic leadership hold a presidential debate devoted solely to that topic. The idea was rejected, but it received support from candidates from Inslee to former Vice President Joe Biden.

And it hasn’t quite gone away, either.

This week, protesters with the Sunrise Movement descended on the Democratic National Committee’s headquarters to demand that DNC Chairman Tom Perez reconsider the decision. The protest included an overnight sit-in by dozens of activists, according to the group.

"Tom Perez is telling us we can’t have a climate debate because that’s not how it’s been done before," said Prakash in a statement. "Business-as-usual is a death sentence for my generation and the billions of people who are already feeling the damages of the climate crisis. This is an emergency and it’s past time that Tom Perez and the Democratic party start being democratic."