Dems to Biden: ‘No climate, no deal’ 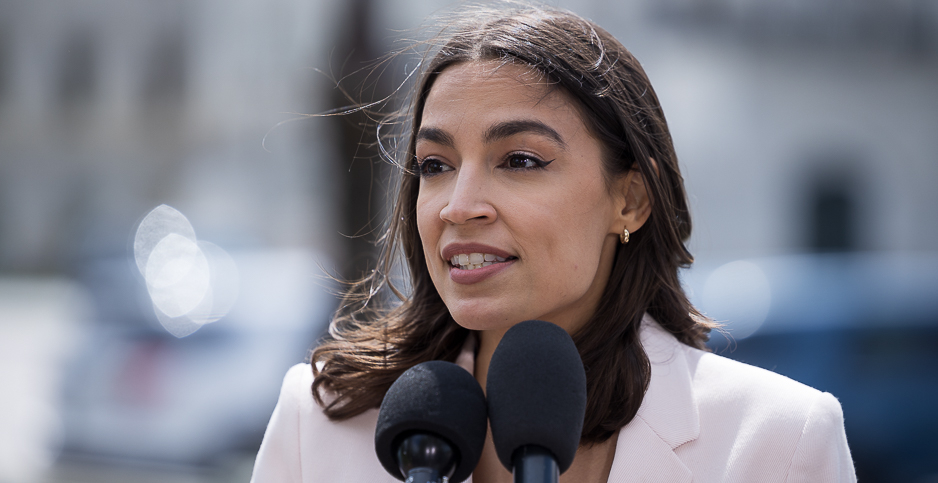 New York Rep. Alexandria Ocasio-Cortez is among the Democrats who came out yesterday against an infrastructure package without strong climate provisions. Francis Chung/E&E News

Progressives yesterday ramped up a pressure campaign on the White House to deliver on climate legislation, with several Democrats signaling they would not vote for an infrastructure bill absent significant provisions to slash greenhouse gas emissions.

Talks have entered a new phase on Capitol Hill after President Biden this week dropped negotiations with Sen. Shelley Moore Capito (R-W.Va.) and moved on to a bipartisan group of lawmakers that is crafting its own infrastructure proposal.

But any deal with Republicans, including the bipartisan negotiating group, is unlikely to include the kind of sweeping climate provisions Biden laid out in his initial $2.2 trillion-plus American Jobs Plan.

The progressive line in the sand could further complicate those conversations and offer a reminder to the White House that Sen. Joe Manchin (D-W.Va.) isn’t the only swing vote in the 50-50 Senate.

Heinrich later tweeted that "an infrastructure package that goes light on climate and clean energy should not count on every Democratic vote."

Sen. Ed Markey (D-Mass.) offered an even starker version of the warning: "No climate, no deal." By last night, he was doubling down even further.

It was a sign that many Democrats view an infrastructure bill as the only game in town for tackling climate change, with appropriations and the midterm season creeping over the horizon.

"I’m still very anxious, and I’m going to stay very anxious until we have a solid 1.5 degrees bill and a path to passage," Whitehouse told reporters yesterday.

Sen. Mitt Romney (R-Utah), who is part of the bipartisan negotiating group, appeared to confirm progressives’ fears about the constraints of a bipartisan infrastructure package, specifically that it would not be able to accommodate the ambitious and far-reaching environmental policy reforms they desire.

"The Democrats’ agenda on climate change is probably something they’re going to pursue, by and large, outside of an infrastructure bill," Romney said.

Democratic leaders have raised the possibility as well, and it remains to be seen whether a bipartisan bill could move alongside partisan legislation that contains parts of Biden’s proposal that Republicans do not support.

But Romney said the bipartisan proposal would include "a number of line items that relate to climate change."

For progressives and climate hawks, that’s unlikely to be enough. Bennet said yesterday that a clean electricity standard is a "critically important" piece of a potential infrastructure bill, and congressional Democrats have pushed for electric vehicle and transmission spending that goes well beyond what Republicans have been willing to offer.

White House climate adviser Gina McCarthy also ruffled feathers this week when she acknowledged in an interview with POLITICO that some of Biden’s climate proposals — like the clean electricity standard — could drop out of infrastructure talks.

Whitehouse said he spoke to individuals inside the administration on Tuesday but would not elaborate on the conversation or say who was on the call, saying only "they were very helpful, as always."

He also said that despite his climate worries, he wasn’t concerned with the incremental give-and-take in negotiations, and would withhold judgment until a bill is available to scrutinize.

"It’s probably wise not to get too excited about alleged pieces of an unformed bill," Whitehouse told reporters. "We’ve got work to do putting an actual bill together, and at the end of the day, that’s going to be the acid test."

Bennet said he’s ultimately confident "that we’re going to pass a large infrastructure bill with a strong climate component out of the U.S. Senate."

"In fact, I think that’s the only infrastructure bill that we can pass out of the Senate," Bennet said during the event with Climate Power.

The progressive angst comes after a Tuesday night meeting of the bipartisan infrastructure group, but it remains unclear when a proposal could emerge.

"We’re putting feelers out and getting more input from our colleagues on both sides," Sen. Rob Portman (R-Ohio) said yesterday, adding that the group has not yet finalized a top-level spending number.

Sen. Bill Cassidy (R-La.), who spoke with Biden by phone about the effort earlier this week, said it’s a work in progress. He described the forthcoming proposal as a framework rather than legislative language.

"We have a first kind of draft, and then you kind of take it to a wider audience and see what they think," he told reporters. "It has to be acceptable to both conferences if you’re going to get 60 votes."

Cassidy declined to comment on whether the group is looking to index the federal gas tax for inflation to help pay for its plan, as Republicans proposed doing in the last Congress to pay for surface transportation programs (E&E Daily, Feb. 14, 2020).

He also declined to say whether the bipartisan group is looking to repurpose COVID-19 relief funds as a pay-for, a sticking point in the talks between Biden and Capito that collapsed this week.

The White House has also opposed GOP proposals to pay for infrastructure through user fees, raising an additional hurdle for indexing the gas tax.

But Sen. Mike Crapo (R-Idaho), the ranking member on the Finance Committee who was part of the failed GOP negotiation with Biden, said yesterday that the White House may have been open to some of the proposals if a broader deal had materialized.

"We didn’t get close enough for a deal to come together obviously, but we did identify a number of different options, which I think had we been able to get closer on the actual spending number might have panned out," he told E&E News yesterday.

However, Crapo added that the two sides "were still far apart" on pay-fors and the overall spending levels, not to mention the scope of the package.

Portman suggested yesterday that the forthcoming bipartisan proposal would also hew to the "traditional" notions of infrastructure, but he also signaled support for electric vehicle infrastructure — a flashpoint in the earlier talks.

Republicans have pilloried the $174 billion for EVs included in Biden’s $2.2 trillion American Jobs Plan as unnecessary but later counteroffered $4 billion for EV infrastructure.

Meanwhile, the bipartisan House Problem Solvers Caucus — which includes 58 members equally divided between the two parties — is proposing $25 billion for EV infrastructure and electric buses as part of a new $1.25 trillion infrastructure proposal.

The eight-year plan includes $761 billion in new spending, another point of contention in the failed Biden-Capito talks, with the White House saying that the last GOP counteroffer represented only a $257 billion increase over what would be spent anyway.

The Problem Solvers’ plan, which does not include pay-fors, would dedicate $582 billion to roads, bridges and safety; $155 billion for transit; $120 billion for freight and passenger rail; $26 billion for ports; $45 billion for resiliency efforts; $74 billion for water projects, including storage in the West; and $71 billion for clean energy.