Dems to hit GOP ‘every chance we get’ on Trump exit 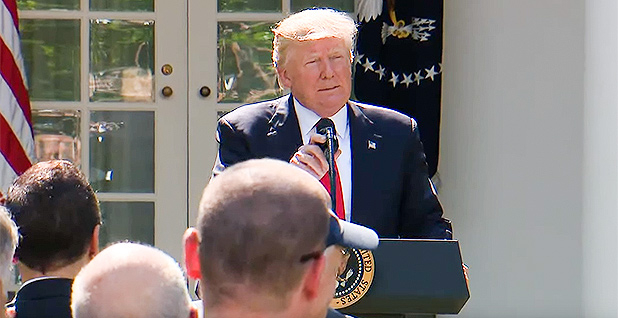 In the aftermath of President Trump's announcement last week to withdraw from the Paris climate agreement, Democrats are looking to press the issue. White House/YouTube

Democrats are weighing legislative options for seizing whatever political advantage they can muster over President Trump’s decision to exit the landmark Paris climate agreement.

House Democrats already anticipate at least one resolution related to the Paris deal to be introduced this week as lawmakers return from the weeklong Memorial Day recess, aides said. On the other side of the Capitol, Sen. Ben Cardin (D-Md.), the ranking member on the Foreign Relations Committee, said last week that he is exploring "legislative workarounds" after Trump’s announcement.

Should Republicans manage to produce a budget resolution as promised, it’s a safe bet that an assortment of nonbinding amendments and resolutions on Paris will make an appearance. Democrats could also try to force procedural votes in support of the Paris deal to exploit internal divisions within the GOP on the exit.

Democrats and environmentalists say Trump’s decision to pull out of Paris reinforces polling that suggests "anti-science" actions by the administration could drive away younger and better-educated independent voters, who may be more alarmed by the administration’s dismissal of the widespread scientific consensus around climate change than red-meat conservatives.

"From a politics standpoint, our strongest argument still is ‘do you believe in science’ and ‘do you believe climate change is real,’ versus getting to the back and forth of whether or not we stay in Paris," said one senior Democratic aide Friday. "My guess is we’ll continue on that tack and just ding them every chance we get on Paris."

However, it’s unclear how much staying power the issue may have, given the highly anticipated testimony of former FBI Director James Comey before the Senate Intelligence Committee on Thursday, and the accelerated pace of the news cycle since Trump became president.

But Democratic staffers said they’ve been encouraged by the extensive media coverage following Trump’s announcement Thursday that he plans to exit the 2015 deal, including endless news reels of EPA Administrator Scott Pruitt dodging questions on whether Trump believes climate change is real.

Pruitt yesterday made the rounds of the morning political shows, despite the previous night’s terrorist attacks in London, prompting extensive coverage of his repeated refusals to say whether Trump still believes climate change is a hoax.

"I think the president made it clear in that statement that the climate changes," Pruitt told ABC’s George Stephanopoulos. "And I think what needs to be emphasized here, is that our focus, with respect to the Paris accord, was about the agreement, the efficacy of the agreement as it relates to the environment, how it impacts the economy."

"The administration comes off as tongue-tied and confused about the climate crisis because the truth is still inconvenient for the large carbon polluters, and they don’t want to stop polluting the atmosphere. It interferes with their business plan," he told Stephanopoulos.

In an appearance on NBC’s "Meet the Press," former Secretary of State John Kerry slammed Trump’s decision as "an extraordinary abdication of American leadership."

"It is a shameful moment for the United States," he added.

Kerry, who has been active in international climate talks for decades, also derided Trump’s claim that he will relaunch negotiations.

Senate Foreign Relations Chairman Bob Corker (R-Tenn.) appeared to lend credence to Trump’s call for a new Paris deal this weekend. "Since it will be four years before the U.S. is officially out, @POTUS could work toward an agreement that could be ratified by the Senate," Corker tweeted. He was spotted leaving the White House in golf attire Sunday.

Democrats aren’t taking the call seriously. "It really shows a total lack of awareness of how the agreement is structured and what it actually entails," said one top aide. "It’s mind-boggling."

Environmentalists say Trump’s decision will boost their efforts to raise the profile of climate change in 2018, including by alienating young, moderate, women and Latino voters.

"Withdrawal from a worldwide climate agreement is an easily understood action that should persuade less politically involved Americans that Trump’s agenda is bad for the economy, jobs and public health," said Dan Weiss, a clean energy consultant with longstanding ties to the Washington, D.C., environmental community. "Trump’s withdrawal made climate much more salient and draws a clear line between those people who favor action and those who don’t."

Environmentalists say that the Paris exit only adds to frustration with other Trump actions, including deep proposed budget cuts to U.S. EPA and the rollback of the Clean Power Plan.

"Looking at our membership and the public writ large, especially since Trump became president, people are just disgusted at what he’s doing across the board," said Tiernan Sittenfeld, the senior vice president of government affairs for the League of Conservation Voters, last week.

Still, green-minded interests have made similar predictions for years, only to see the House and Senate remain in GOP control. Additionally, Trump vowed to pull out of Paris while on the campaign trail and still won the election.

The responses from GOP leaders showed no signs of any remorse for Trump’s Paris exit, which they similarly cast in economic terms.

"The Paris climate agreement was simply a raw deal for America," said House Speaker Paul Ryan (R-Wis.). "Signed by President Obama without Senate ratification, it would have driven up the cost of energy, hitting middle-class and low-income Americans the hardest."

Trump, said Senate Majority Leader Mitch McConnell (R-Ky.), "has once again put families and jobs ahead of left-wing ideology and should be commended for his action."

Still, some GOP moderates slammed Trump’s decision, including Rep. Carlos Curbelo (R-Fla.), a co-founder of the bipartisan Climate Solutions Caucus, who called the Paris exit a "strategic mistake that sets us back."

Democrats also highlighted the response to Trump’s decision by House Energy and Commerce Chairman Greg Walden (R-Ore.), who earlier this year was accused of being a climate denier during a town hall meeting (Climatewire, April 17).

Walden’s statement sidestepped the substance of Trump’s decision and focused instead on the role of technology in lowering emissions.

One Democratic aide called the statement "milquetoast," given that Walden spent the last four years as the head of the House GOP’s campaign wing. That fact "is not lost on any of us," he added.