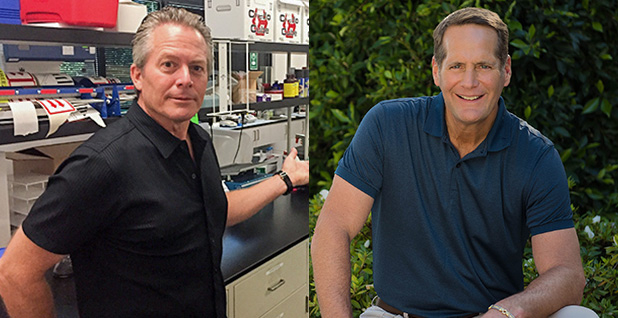 Worried about being shut out of the general election, the Democratic Congressional Campaign Committee intends to play kingmaker in a high-profile and increasingly fierce primary House race in Southern California, where climate will be an issue in the general election.

Nonpartisan political handicappers, including The Cook Political Report, say he faces the most daunting re-election of his career in the district Hillary Clinton narrowly won in 2016.

The area, a stretch along the Southern California coast and inland Orange County, has long been the embodiment of well-heeled GOP suburban politics. No more: President Trump spawned a blast of progressive organizing that threatens Rohrabacher’s 30-year hold on the district.

Widely known for his affinity for Russia and links to President Vladimir Putin, Rohrabacher denies any human causes of global warming, which he considers a liberal fraud.

"He’s one of the few people left on the face of the Earth who doesn’t believe in climate change," Rouda said in an interview with E&E News.

The party picked Rouda, a former businessman who has largely self-funded his campaign, over several other Democrats, among them stem cell researcher Hans Keirstead, the party’s original recruit.

Under California primary rules, the top two candidates advance regardless of political party to the November general election. Thanks to the rise of Republican Scott Baugh — a former state assemblyman and onetime Rohrabacher ally — Democrats are worried they won’t make the cut. With Election Day approaching, they are tossing money around.

The campaign wing of the Environmental Defense Fund launched a $100,000 mailer campaign this morning attacking Baugh for campaign finance violations in the 1990s and his views on climate change.

314 Action, a nonprofit that aims to elect candidates with science backgrounds and endorsed Keirstead, made a $1 million ad buy in the Los Angeles media market. The group spent $280,000 on mailers last week backing the scientist and opposing Rouda.

"Democrats are scared they’re going to be frozen out of the top two," said Nathan Gonzales of Inside Elections, a nonpartisan political watchdog. "The question is, who finishes second? There are so many candidates and just a few percentage points separating them."

The DCCC cited a fresh poll, conducted by Tulchin Research, that showed Rohrabacher leading the field with 30 percent of the vote and Rouda, Keirstead and Baugh all drawing 13 percent, with three other Democrats far behind. Other polls over the past month also show a tight race.

The national party has spent more than $515,000 on the race, largely on ads attacking Baugh.

Keirstead, who won the backing of the state Democratic Party at a convention this spring, accuses the national party of undue meddling and interference.

In a campaign statement, he called the DCCC’s decision to back Rouda "extraordinarily counterproductive" and urged the group to focus on the Republicans. Multiple messages left with the Keirstead campaign this week seeking comment were not returned.

Dave Wasserman of The Cook Political Report called it a "paralyzing predicament" for the DCCC.

"If top House Democrats don’t insert themselves in races and a Democrat fails to advance to November, they would get blamed for whistling past a train wreck," he wrote on the Cook Report website. "But whenever they do, they risk looking like aloof meddlers and tarring their intended beneficiary as the candidate of ‘Beltway insiders.’"

It has been an uneven campaign season for the DCCC, which has inserted itself into primaries across the country, to mixed results. The group lost Tuesday when Kara Eastman, a progressive, defeated Brad Ashford — the DCCC-backed candidate — in a key Democratic primary in Nebraska.

House Minority Leader Nancy Pelosi (D-Calif.) made no apologies for the DCCC’s wading into the contentious California primary.

"The Democrats, our congressional delegation, may weigh in on some of the races to ensure that we have somebody in the top. They may be subjected to criticism for that, but I’d rather be criticized for winning than criticized for losing," Pelosi told reporters yesterday.

The contest was plenty fraught before the DCCC dived in.

Keirstead, who developed a cutting-edge treatment for spinal cord injuries, was hailed early in the campaign as a prize catch for the party in a key swing district. He picked up early support from a number of national groups; visited Washington, D.C.; met party higher-ups; and slammed Rohrabacher, the vice chairman of the House Science Committee, for his views on climate.

"Facts are my whole life," Keirstead said in a television ad.

But like a man in oversized shoes, Keirstead cannot stop tripping himself up.

Keirstead was also accused of embellishing his resume, claiming his doctorate was in neuroscience rather than zoology.

Rouda’s campaign used both incidents in campaign ads earlier this year. Keirstead’s campaign dismissed both claims as overblown. He left the February California Democratic convention with the party’s backing.

"Dr. Hans Keirstead’s experience and commitment to scientific research that relies on data and facts is desperately needed in an administration which is disregarding years of scientific evidence," Orange County Democratic Party Chairwoman Fran Sdao said in a statement, calling him the "best candidate to represent the people of Orange County."

But the troubles would not go away. In a March debate, Rouda trapped an agitated Keirstead into admitting he did not vote in the 2016 primary. Keirstead said he was "busy." Some in the audience booed.

The event sponsor, the progressive grass-roots organization Indivisible, which has been active in the district, later endorsed Rouda, who appeared to be gaining momentum in the weeks before the DCCC’s decision to back him.

Polls showed him catching up to Keirstead, while his campaign announced a series of endorsements from a broad swath of local unions and other groups.

The local activism, which has included protests at Rohrabacher’s district office every Tuesday for more than a year, forms the basis of Democratic hopes in Orange County. Some national party sources say the Rouda campaign better rallies the local grass-roots groups desperate to topple Rohrabacher.

Rouda agreed, citing "a direct correlation between grass-roots support and the DCCC’s decision" to endorse him. He noted that Keirstead’s stumbles played a part.

"The grass-roots activists here have done a really good job of vetting candidates; certainly anytime somebody makes numerous misstatements or false statements, voters are going to hold them responsible."

Keirstead’s campaign, which accuses Rouda’s campaign of "false and ludicrous" attacks, calls the DCCC’s decision premature and — citing the state party endorsement and other support — an attack on local voices.

Opposition research has flooded the race, with rumors swirling about both candidates. Gonzales said this is, in part, a function of two first-time candidates vying for office.

"It’s also evidence this is a high-stakes primary," he said. "Being the Democratic nominee in a district Hillary Clinton won when Donald Trump is in office: That’s a coveted place to be."

For his part, Rouda, a former registered Republican, has taken fire for past campaign finance donations, notably one to Ohio Gov. John Kasich (R) in 2016 — Rouda hails from Ohio.

Opponents note other donations, but Rouda said the majority of these, which have an Ohio address and cluster in the late 1990s and early 2000s, were made by his father, who shares his name and appears identical on Federal Election Commission documents.

As for the Kasich donations, Rouda said Kasich’s wife, Karen, is a family friend.

"I don’t agree with John when it comes to social issues, but he has a history of reaching across the aisle," Rouda said.

Rouda, who trumpets opposition to offshore drilling at the top of his website, picked up an endorsement from the Sierra Club earlier this month.

"I have pledged not to accept Big Oil donations," he tweeted in February. "We must expand a forward movement working toward clean, sustainable energy."

A personal financial disclosure shows Rouda has assets worth between $500,000 and $1 million in an exchange-traded fund linked to the crude oil prices, as of August 2017.

Rouda has kicked in more than $1 million to his own campaign. In an email, Rouda said he was betting that oil prices would rise as renewables took on a bigger market share. He claims to have divested from the fund.

Asked about the issue, Sierra Club political action committee director Sarah Burton responded: "The Sierra Club examines the policies and platforms candidates put forward, which is why we’ve endorsed Harley Rouda to be the next representative for California’s 48th District."

A surfer congressman who likes pot

Primary Day looms in three weeks, and that’s just a waystation on the way to the grand prize, Nov. 6.

And if either Keirstead or Rouda manages to beat Baugh, the subsequent run against Rohrabacher will not be easy. Outside GOP groups eager to preserve the House majority will spend heavily, and the incumbent has three decades of name recognition in the area.

Rohrabacher did not have kind words for his onetime protege, Baugh, whom he recruited to run for the state Assembly more than two decades ago.

"I wasn’t surprised, but I was dismayed by" his entering the race, Rohrabacher said. "He feels compelled to be a congressman, and that’s the worst person to have here, because they are the first people to sell out to the special interests."

A surfer who supports cannabis legalization, Rohrabacher boasts a distinct public persona that has served him well in the Southern California seat.

The congressman told E&E News this week that he is "bubbling with optimism" about his prospects for retaining his seat. He dismissed the Democratic primary contenders as liberals who stand little chance of winning over the conservative voters who have sent him to Washington for three decades.

"I am not an ultra-right-wing conservative to them; I am just one of them," he said.

The key for any Democrat, said Gonzales, will be campaigning on policy specifics such as health care, rather than leaning solely on Trump opposition.

"That’s enough to fire up the base," he said, "but that won’t win the election."

Gonzales pulled a political lesson from Keirstead’s campaign and the party’s ultimate support of Rouda.

"Keirstead was billed as the messianic candidate, and I think he’s a good example of how success in a professional field does not always translate into electoral support," Gonzales said.

"He’s done more in his career to help people than I have," he added, "but running for Congress is hard."