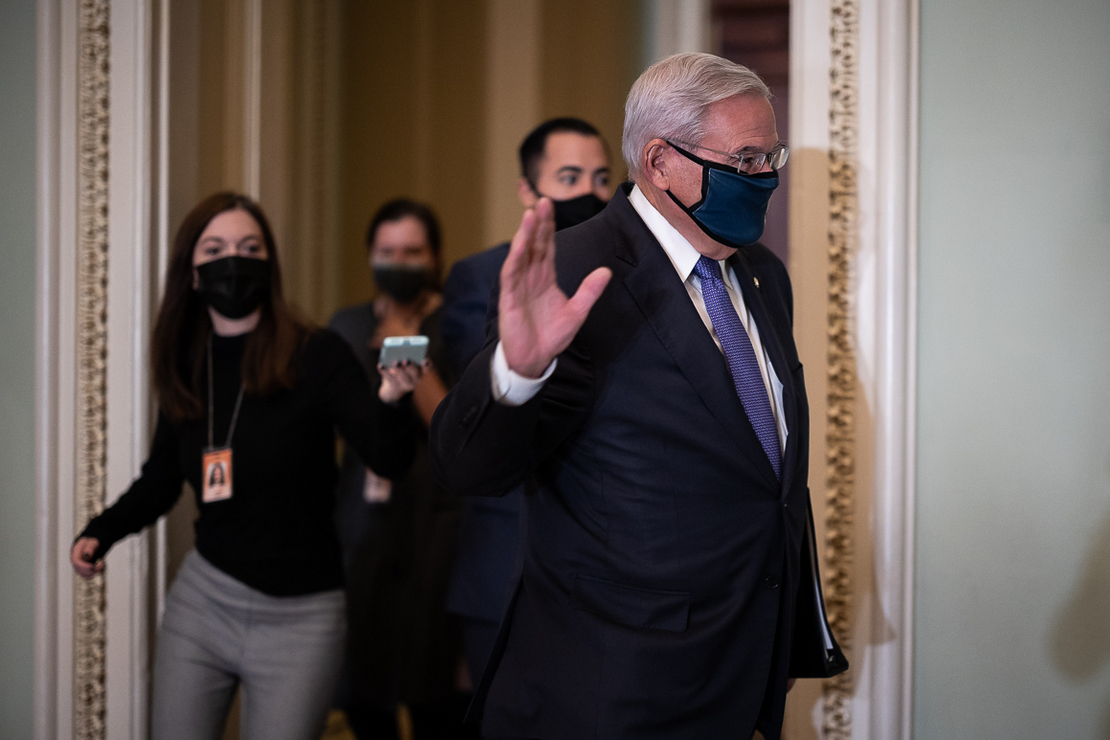 It’s the latest chapter in a yearslong fight over a project with implications on the global energy markets, the balance of power between East and West, and U.S. internal politics, with both parties competing over who can be tougher on Russia.

“This legislation makes it absolutely clear that the U.S. Senate will not stand idly by as the Kremlin threatens a re-invasion of Ukraine,” Menendez said in a statement.

The bill is meant to give Democrats an alternative to legislation from Sen. Ted Cruz (R-Texas) to force President Biden to enact new, immediate sanctions against the Russia-to-Germany conduit.

Senate Majority Leader Chuck Schumer (D-N.Y.) agreed to vote on Cruz’s bill in exchange for the Texas senator dropping his "hold" on dozens of diplomatic nominees. That roll call is scheduled to happen this afternoon.

Congress and the White House imposed sanctions on Nord Stream 2 before with strong bipartisan support, but Biden waived tough action against the pipeline last year with the goal of improving relations with Germany.

Administration officials have been lobbying Senate lawmakers to stick with the president, saying deferring sanctions gives the West leverage against Putin. Targets include moderates like Sen. Joe Manchin (D-W.Va.), who has not said how he will vote.

Menendez has been hinting at his own alternative for days as he sought co-sponsors for the plan. In total, 26 Democrats signed on to the chair’s bill. No Republicans have joined the effort, however.

Dubbed the “Defending Ukraine Sovereignty Act of 2022,” the legislation would authorize $500 million for military aid to Ukraine once the president confirms an escalation in Russian hostilities.

The legislation would also put lawmakers on the record saying the gas pipeline "is a tool of malign influence of the Russian Federation, and that the United States should consider all available and appropriate measures to prevent the Nord Stream 2 pipeline from becoming operational, and directs the administration to review its prior waiver of Nord Stream 2 in light of the Kremlin’s military buildup and aggression towards Ukraine."

The Menendez bill won’t come up until after the Senate deals with the Republican plan. The Schumer-Cruz agreement does not allow a side-by-side vote.

"I suppose Democratic leadership could try to play some games, but the terms of the agreement that we reached in December was [that] this would be a stand-alone vote with a 60-vote threshold," Cruz said last week.

At least some major Nord Stream 2 opponents have been convinced by the White House and leadership’s strategy.

“We need legislation that addresses the political situation we face today in response to increasing Russian aggression — not last year or two years ago,” said Sen. Jeanne Shaheen (D-N.H.), chair of the Senate Foreign Relations Subcommittee on Europe and Regional Security Cooperation. “The dynamics changed and so must our strategy. That is what this bill would do.”