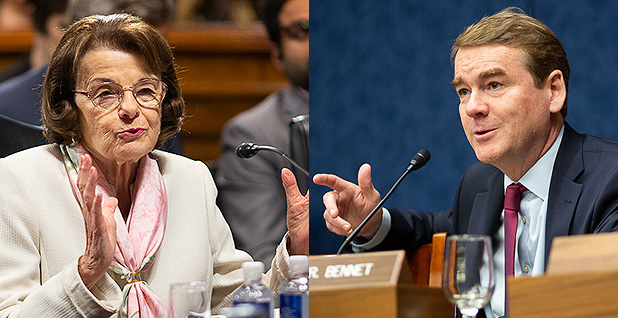 Senate Democrats are urging Interior Secretary David Bernhardt to remove William Perry Pendley as acting chief of the Bureau of Land Management as rumors swirl that Pendley could soon be nominated for the post.

Numerous Interior and BLM sources have told E&E News for the past two weeks that the White House is exploring nominating Pendley for BLM director and that Pendley had undergone a formal background check in anticipation of a nomination. And Pendley himself in the past couple of weeks has told some bureau officials that he "expected" to be nominated for BLM director, sources said.

But those sources have also cautioned that they are not aware of a final decision on whether President Trump would nominate the conservative lawyer, who at times over the past 30 years has challenged the legality of federal lands ownership. A senior government source told E&E News this week that Bernhardt is not sold on a Pendley nomination, though privately he has defended Pendley against criticisms from congressional Democrats and environmental and sporting groups, sources said.

Along those lines, a dozen Senate Democrats wrote in a letter sent this week to Bernhardt that they are opposed to Pendley serving as acting director, and they called for the secretary to "rescind Mr. Pendley’s authority as Acting Director of the BLM."

The letter — organized by Colorado Sen. Michael Bennet and signed by Sens. Dianne Feinstein of California, Martin Heinrich and Tom Udall of New Mexico and presidential candidates Bernie Sanders (I-Vt.) and Kamala Harris (D-Calif.), among others — also urges "that the President nominate a BLM Director with a true commitment to our public lands and waters."

Bernhardt appointed Pendley, who had never worked at BLM, deputy director of policy and programs for the bureau in July (Greenwire, July 15).

But two weeks later, Bernhardt signed a secretarial order granting Pendley the authority to perform all "functions, duties and responsibilities" of BLM director on a temporary basis through Sept. 30 (E&E News PM, July 29).

It’s not clear whether Bernhardt will extend his title of "exercising authority of the director," whether Pendley will return to his duties as deputy director of policy and programs, or whether Trump formally nominates him as director.

In it, Hammond writes that Pendley "has done an admirable job leading the BLM" since July.

"He has shown a strong commitment to ensuring the BLM is a good neighbor, and has worked collaboratively with those closest to the lands it manages to support the Bureau’s multiple use, sustained yield mission," according to the letter, copies of which were also sent to the other 11 senators. "He has made it a priority to engage with BLM employees as the Bureau’s restructuring and relocation move forward, ensuring that affected employees receive information and counseling, if needed."

Hammond concluded the letter by stating that Pendley "has shown that he is both well-suited and uniquely qualified to perform this important leadership role as we await the nomination of a permanent Bureau Director."

Prior to Hammond’s letter, Interior issued a statement to E&E News stating that Bernhardt "has every confidence in Mr. Pendley’s commitment to carry out the priorities of this Administration for the betterment of the American people."

But Interior declined to address whether Pendley’s tenure as acting BLM chief will continue past Monday, or whether Pendley could be formally nominated for the permanent position

But opponents are getting worried. That’s mostly due to Pendley’s public statements and writings in the past 30 years opposing federal land ownership. They are also concerned about his work as a lawyer, his role as the former president of the Mountain States Legal Foundation and his involvement in litigation defending Trump’s controversial decision to slash the size of the Grand Staircase-Escalante National Monument in Utah.

Pendley only recently recused himself as an attorney in that case (Greenwire, Sept. 24).

Pendley has been on a recent media tour of sorts defending his past record as an attorney and, according to critics, attempting to whitewash his record (Greenwire, Sept. 6).

During a House Natural Resources Committee hearing on the BLM relocation plan this month, he defended himself against what he called "attacks on my character."

Heinrich told E&E News this week that he confronted Bernhardt about Pendley and his qualifications to lead the bureau that oversees 245 million acres of public lands.

"I have warned him that William Perry Pendley is a zealot and an extremist, and would be viewed as such by many members of the Senate, and that I don’t think he could survive a confirmation hearing," Heinrich said.

Heinrich pointed to a January 2016 opinion article Pendley wrote in National Review in which he decried federal landownership and argued that the Constitution all but requires the federal government to sell the lands it owns in the West.

"Clearly he meant that," Heinrich said. "And if you’re going to put that kind of extreme ideology in the position of effectively being the manager of hundreds of millions of acres of public land, I think that’s a very serious mistake."

At the same time, Heinrich said he would rather have Pendley formally nominated for the BLM directorship so that he could face lawmakers in a confirmation hearing, rather than continuing as an acting chief.

"This is clearly someone who is so far out of the mainstream that he very much deserves the opportunity to be publicly vetted in front of the American people," he said.

The pushback and the rumors of a possible nomination by the president come after the Interior Department formally announced in July that it would relocate BLM’s Washington-based headquarters to Grand Junction, Colo., and move more than 200 other senior-level positions to state offices across the West.

A Senate Interior-EPA appropriations bill for fiscal 2020 does not include any money for the BLM relocation plan; neither does the House version of the bill (Greenwire, Sept. 26).

But Congress did approve $5.6 million in the current fiscal budget, which runs through Monday, and Pendley has said publicly that the appropriated funds will be enough to move BLM’s headquarters and about 30 top BLM officials to Grand Junction.

BLM last week announced that it has signed a lease on an office building to house the bureau’s new headquarters (Greenwire, Sept. 23).

The senators noted the ongoing reorganization effort in the letter sent yesterday to Bernhardt concerning Pendley.

"As the BLM considers a major reorganization, there is no reason for this effort to be led by an Acting Director who spent his career attempting to dismantle the agency," they wrote. "Keeping Mr. Pendley atop the BLM is an affront to all Americans who believe in the balanced, multiple use and sustained yield mission of the agency.