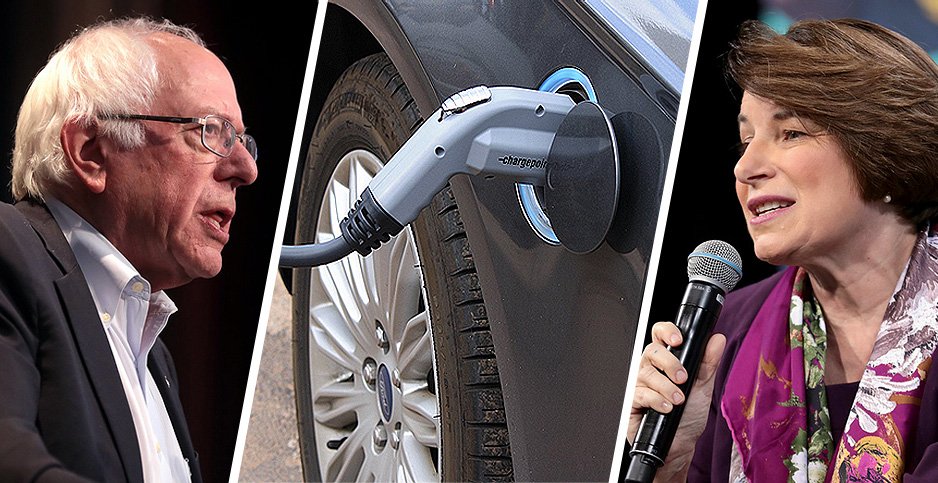 The majority of Democratic presidential candidates are proposing electric vehicle targets that would effectively phase out the sale of new gas cars in 10 years — a change that would wipe away analysts’ projections for EV growth and transform the energy sector permanently.

But is the idea viable? And is it a smart political strategy?

The extent of the idea’s support become apparent last week, when most 2020 candidates included vehicle targets in plans to address climate change, in the lead-up to a CNN town hall.

Of the 10 Democrats who appeared in the town hall, six said they would require all new passenger cars to be zero-emissions by 2030, and a seventh, Sen. Kamala Harris (D-Calif.), set the target date at 2035. Their plans generally equate "zero-emissions" power with battery electrics. None specifically proposes fueling cars with hydrogen, an element that some scientists think could prove useful for the heaviest vehicles.

Their plans could put them at odds with the oil and gas sector, automakers and even utilities, say experts, and raise a multitude of questions about how the influx of EVs would affect the grid, energy industry employees and car buyers.

"What this would look like, and how this would work, probably hasn’t been talked about at the dinner table in most communities," said Barry Rabe, a political scientist and professor of environmental policy at the University of Michigan.

"This would be a huge, massive shift," he said.

Few analyses of car markets have presented any scenario in which electrics get anywhere near 100% of sales in the coming decades.

Bloomberg New Energy Finance, which has some of the more optimistic projections, has said plug-in hybrids and pure battery vehicles will hit 60% by 2040. The U.S. Energy Information Administration puts it at just 25% in 2050.

Plans to step up the pace wouldn’t just meet opposition from the oil and gas industry: The auto and utility sectors might also find reason for discomfort.

Gloria Bergquist, vice president of public affairs at the Alliance of Automobile Manufacturers, said automakers would need to focus on bringing out electric versions of pickup trucks — a perennial big seller in the United States that has taken a prominent role in companies’ growth plans.

Companies are marketing more and more EV models. "The issue is not how to electrify. Automakers are doing that. The issue is getting 98% of consumers nationwide to buy electrified vehicles," she said.

The candidates would help automakers do that using two main policy tools.

Several of them, including Sen. Cory Booker (D-N.J.) and Buttigieg, said they would expand existing federal tax credits for EV buyers. Sen. Elizabeth Warren (D-Mass.) and Sanders also promised to create a car buyback program that would pay drivers to swap gas cars for EVs — a program that would be funded to the tune of $2.09 trillion, in Sanders’ version. Candidates also have called for millions of dollars in increased spending to address climate change — paid for by carbon taxes, reversal of Trump tax cuts or other means — that also could boost zero-emission vehicles.

Some investor-owned utilities have shown a taste for policies promoting a technology that could lift demand for power. The industry association Edison Electric Institute, along with several of the country’s largest utilities, has quietly lobbied to preserve the tax credit for EVs, for example.

Philip Jones, executive director of the Alliance for Transportation Electrification and a former president of the National Association of Regulatory Utility Commissioners, said he believes a 100% electrification proposal could be made to suit utilities.

But he’s been "leery" of gas-car phaseouts floated by state legislators, he added.

Utilities and state regulators are only beginning to study how the grid could smoothly take in power from increasingly renewable, decentralized sources and meet the new demand from EVs — while securing the grid from cyberattacks.

"Now, can the utilities plan for this? Yes. But do they need to do much more granular planning to prepare for, say, 30% of light-duty by 2030? Yes," said Jones.

For members of the alliance, which enfolds utilities, charging-infrastructure firms and three automakers, many of the Green New Deal-style plans for transportation electrification are "way too high-level and way too general," he said.

"There’s not enough meat on the bones," Jones said.

Two academics with expertise in energy systems, consulted by E&E News, agreed that a decarbonization effort on the scale proposed by many of the Democrats would be "daunting" for automakers and utilities alike.

The auto industry in particular would find itself transformed, from raw materials to maintenance and marketing, over a short period of time.

But industries’ reasons for resistance ought to be probed carefully, they said.

"I’m actually quite optimistic" about the feasibility of a 10- to 20-year transition to 100% EV sales, said Cutler Cleveland, a Boston University professor of earth and environment and a principal investigator for the city of Boston’s carbon-neutrality plans.

When confronted with emissions regulations, Cleveland added, "industries always say, ‘Oh, my god, this is impractical; you’re going to raise prices for consumers and put people out of work.’ Almost always, they’ve been wrong."

Karl Rábago, a senior policy adviser at the Pace Energy and Climate Center and a longtime clean-energy consultant, echoed that skepticism. "I wouldn’t set policy based on what trade associations say. Their vested interests are too strong," he said.

The falling cost of electric vehicles has likely encouraged Democrats to propose rapid conversions, he added. The Trump administration’s hostility toward clean energy, the prospect of independence from foreign-sourced oil, and millennials’ ambivalence toward personal cars may lend the idea political viability, too, he said.

"I’m not surprised. I’m only surprised by the pace that these ideas are mainstreaming," Rábago said.

Two of the candidates who took part in the Democratic town hall — Sen. Amy Klobuchar of Minnesota and former Rep. Beto O’Rourke of Texas — say they would bring the nation’s total greenhouse gas emissions to net zero by 2050, but haven’t detailed a specific path for transportation. Neither campaign responded to inquires from E&E News.

A third, former Vice President Joe Biden, hasn’t set a target date for phasing out gas cars but promises to deploy half a million EV chargers by 2030 and introduce new fuel standards that would eventually electrify light-duty and medium-duty vehicles.

Some of the candidates may be betting that bold climate plans make for "good politics" during the primaries, said Rabe of the University of Michigan.

But during the general election, it could complicate their electoral chances in battleground states where the auto and fossil fuel industries propel local economies, like Michigan and Pennsylvania.

"What we don’t know is whether the nominee will stay the course and keep the plan, or hedge and dial back," he added.

Republican-aligned policy groups criticized the focus on a full transition to electric cars.

Charles Hernick, policy director at the moderate Citizens for Responsible Energy Solutions, called it "a distraction" from steps aimed at offsetting emissions from gas cars on the road already.

"I’m encouraged by more oil and gas companies looking to sequester carbon dioxide up-stream so that in a few years ‘net zero’ gasoline could be a reality," he wrote in an email to E&E News.

Tom Pyle, president of the free-market Institute for Energy Research, said electrifying every passenger car sold, in 10 years, is "an absolute impossibility." About 2% of car sales in the United States are plug-in hybrids or full electrics.

"All of this talk about EVs completely ignores consumer preference," he said. "If EVs are so good, why do we subsidize them?"

Democrats, he added, were "placating their hard-left base. These guys have all lurched to the left on these issues because the green left has basically captured the party."