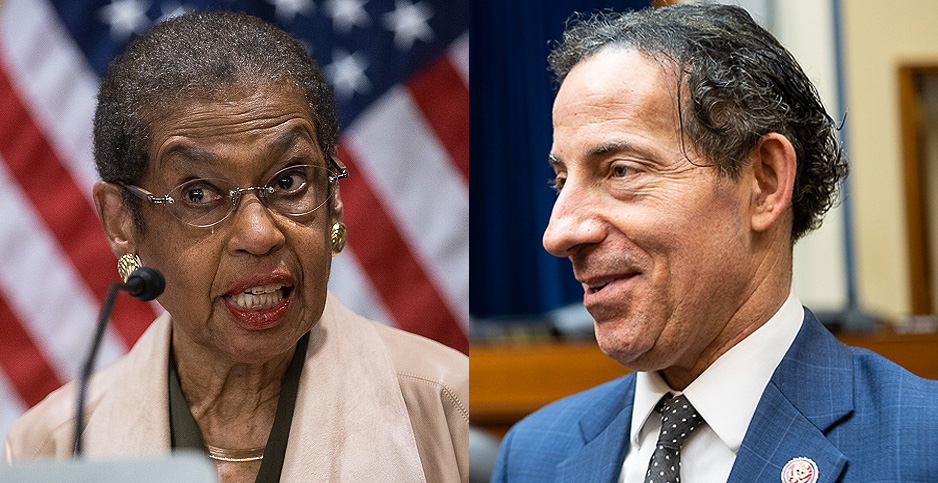 The National Park Service would be forced to remove the name of segregationist Francis Newlands, a late Nevada senator, from a fountain and plaque at Chevy Chase Circle on the Washington-Maryland border, under a House bill that will be introduced by Del. Eleanor Holmes Norton (D-D.C.) and Rep. Jamie Raskin (D-Md.). Francis Chung/E&E News

When Francis Newlands created the Chevy Chase Land Co. in the 1890s, he envisioned an exclusive neighborhood on the border of Maryland and Washington that would have no Blacks or Jews.

Later, after becoming a Democratic senator from Nevada in 1903, Newlands called for the repeal of the 15th Amendment, which gave Black men the right to vote, writing that Blacks were "a race of children requiring guidance, industrial training and the development of self-control."

Citing his long-held white supremacist views, two House Democrats — Rep. Jamie Raskin of Maryland and Del. Eleanor Holmes Norton of the District of Columbia — now say it’s time to remove the name of the famous segregationist from a fountain and plaque honoring him at Chevy Chase Circle.

"Let’s leave Newlands’ disturbing legacy to his family and others who want to continue to honor him, but the people of Maryland and Washington can move on," Raskin said. "We should stop rewarding racist ideology and politics with a public memorial on public property. It is time to write a new story for the new century."

In a joint statement yesterday, Raskin and Norton said they will introduce a bill that would force the National Park Service to scrap the memorial, which was built in 1933 and paid for by the Newlands family.

The park service manages the site at Chevy Chase Circle, which lies partly in Washington and in Raskin’s 8th District.

"There is no redeeming value in preserving an honorific to an avowed and unreconstructed racist," Norton said.

"This plaque and fountain tell no story. They are meant only to honor Francis Newlands, a segregationist who argued that voting rights won for African Americans as a result of the Civil War should be repealed," she said. "Newlands belongs in the dust bins of history, not preserved on a traffic circle that symbolizes the unity between the nation’s capital and the state of Maryland."

The bill is the latest twist in a hot debate involving the National Park Service and the public display of Confederate statues and other monuments that honor controversial historical figures (Greenwire, July 16).

The park service has responded to a rash of vandalism against monuments that began in late May after the Memorial Day death of George Floyd, an unarmed Black man who died while in the custody of Minneapolis police.

A white officer was charged with second-degree murder and manslaughter after he held his knee on Floyd’s throat for nearly nine minutes, sparking a wave of nationwide protests.

President Trump has made the issue a cornerstone of his campaign for reelection, denouncing those who want to remove statues and monuments as "thugs" and "criminals" who want to erase U.S. history.

In addition, he signed an executive order July 3 that called on the Interior Department to create a new national garden featuring the statues of 31 "American heroes."

‘The time is long overdue’

Raskin said "the time is long overdue" to stop honoring the man whose company helped create them.

"This former senator from Nevada has received more honor and attention from us than he deserves, and surely we can find a more appropriate person to honor at this heavily traveled crossroads between Maryland and Washington, D.C., two communities that pride themselves on equality, diversity and strong democracy," he said.

Raskin and Norton are no strangers to the long-simmering debate over statues and monuments.

Norton has called for the permanent removal of the statue of Confederate Brig. Gen. Albert Pike at Washington’s Judiciary Square, which is undergoing repairs after it was toppled and set afire by protesters in June.

She also introduced bills that would require the park service to remove the Emancipation Memorial at Washington’s Lincoln Park, H.R. 7466, and a statue of President Jackson at Lafayette Square near the White House, H.R. 7465.

The Emancipation Memorial has drawn criticism because it depicts a freed slave kneeling at President Lincoln’s feet in a subservient position, while critics say the Jackson statue should come down because he was a slaveholder who backed the removal of most Native Americans from land east of the Mississippi River.

Raskin co-sponsored a bill, H.R. 970, that would force the park service to take down a 24-foot statue of Confederate Gen. Robert E. Lee at Antietam National Battlefield in Maryland, next to the Newcomer House.

Trump donated his first-quarter salary in 2017 to help renovate the house, which is situated near a bridge that became a thoroughfare for both Union and Confederate troops at the Battle of Antietam in 1862.

The National Park Service does not comment on bills unless the agency is asked to testify on them, but the agency has made it clear it has no interest in removing any of the statues.

In June, NPS acting Director David Vela told the National Park System Advisory Board that statues serve as "teachable opportunities" to tell the stories of the nation’s most challenging and difficult times.

"Our goal is not to help a visitor determine what is right or wrong — our goal is to provide the facts, the information, so that they can do that on their own," Vela said.