Dems want to kill oil and gas leasing. Here’s why it matters 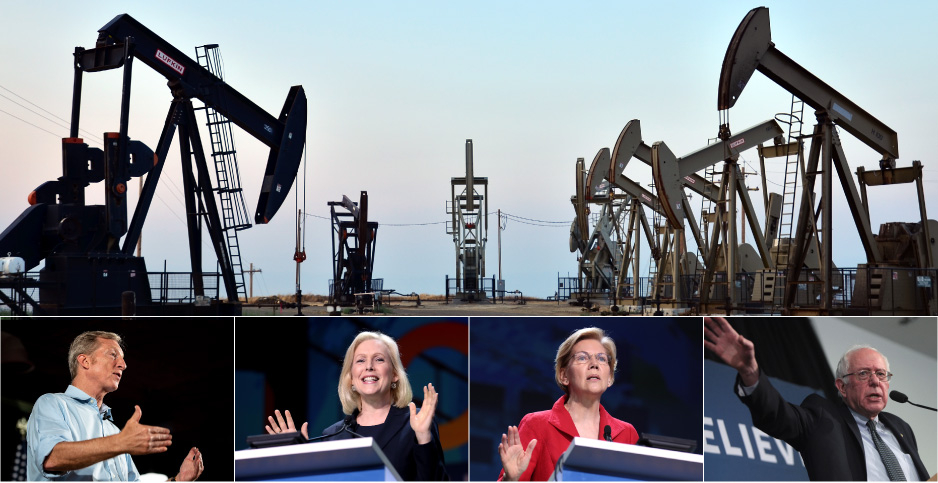 Sen. Elizabeth Warren of Massachusetts, for example, first made the pledge in April as part of her plan for transforming the federal government’s relationship with public lands.

The U.S. Geological Survey concluded last year that fossil fuels from federal lands and waters account for 24% of the nation’s carbon dioxide emissions throughout their life cycle.

"Right now, the fossil fuel industry already owns five times as many fossil fuels as they can burn, according to science, and we can’t afford to sell them anymore," said Sara Shor, associate director of campaigns at the environmental group 350 Action.

"Reducing the consumption of fossil fuels isn’t enough. We have to phase out production — starting now," Gillibrand wrote in her climate plan, promising to "immediately" sign an executive order to "protect our public lands from exploitation by banning any new fossil fuel production on public lands and phasing out existing leases."

Part of activists’ case for stopping new leases while allowing existing leases to continue is to provide a transition time for companies to wean themselves off fossil fuels before they are phased out.

The movement got a boost in 2015 when President Obama rejected Keystone XL, saying in part that if world leaders wanted to stop the worst impacts of climate change, "we’re going to have to keep some fossil fuels in the ground rather than burn them."

‘There is a naiveté’

Moving the United States rapidly away from fossil fuels is an easy political chip for the Democratic candidates, though it’s likely an empty promise, experts say.

Sondermann suggested that the Democratic field is acting out the inverse of conservatives’ shift to the right during the rise of the tea party movement.

Floyd Ciruli, another Colorado political analyst, pointed to new oil and gas rules being discussed in his home state, where the loudest voices in the room are driving out moderates. Oil and gas firms are starting to consider leaving the state, and the financial impact of losing industry hasn’t hit home for many residents, he said.

The "massive hostility" to oil and gas in some quarters won’t just stop with an end to leasing, Ciruli added. That could mean more drastic demands to reduce or end fossil fuel development.

"What I’m suggesting is that the most extreme issue has not even broken the surface yet, nationally," he said.

Thirty-five states receive money from offshore and onshore development, but most of that cash is concentrated in a few big winners — meaning Democrats’ promised action could have an outsize effect on those regions.

New Mexico, the largest producer of oil on federal land, has the most money to lose. Energy-related income from leasing, production royalties and other fees contributed $635 million to New Mexico’s coffers in 2018. That year, a single oil and gas lease sale brought in record revenue of $1 billion, which was split between the state and federal government.

Wyoming wasn’t far behind its southern neighbor, taking in $564 million last year from federal energy programs. Wyoming is the second-highest producer of oil on federal land and the largest federal natural gas producer.

The total of fossil fuel dollars derived from public lands reached nearly $9 billion in 2018, according to the Interior Department’s Office of Natural Resources Revenue.

It would take years for production to be affected by simply barring new leases, and a crisis likely wouldn’t immediately hit communities that depend on federal development, said Mark Haggerty, an economist at Headwaters Economics in Montana.

Much of the currently leased federal acreage in the country isn’t being drilled for hydrocarbons.

The oil industry argues that a ban on leases wouldn’t just be a bad idea, but would also be illegal under the Mineral Leasing Act and the Federal Land Policy and Management Act.

"It leaves considerable discretion to the secretary of the Interior on which lands are available and under what restrictions. But a blanket ‘no more development on federal lands’ is clearly not authorized," she said.

Watson, who served as Interior’s assistant secretary for land and minerals management under President George H.W. Bush, said blanket bans on development don’t account for the country’s massive demand for affordable fuel and the fact that it will meet that need somehow.

"Oil and gas is fungible. If we don’t get it from our federal lands, we will get it from somewhere else," Watson said.

Talk of finding climate change solutions goes back to the Bush era, at least, she said. But "the needle on decarbonizing our economy hasn’t really changed, and that is because you are talking about changing people’s behavior," she said.

"We see the candidates’ pledges to stop new drilling on federal lands and waters as a great first step toward fully phasing out fossil fuel production, which we know is going to be necessary to meet our climate goals and protect workers and communities," said Charlie Jiang, climate campaigner at Greenpeace USA, which is tracking and scoring candidates’ climate plans.

Jiang said that, along with decisions like taking the No Fossil Fuel Money Pledge, endorsing an end to federal fossil fuel leases has "become the baseline consensus position that any Democrat needs to take on to show they’re serious about confronting the climate crisis."