Dems want to kill public lands drilling. Will it backfire? 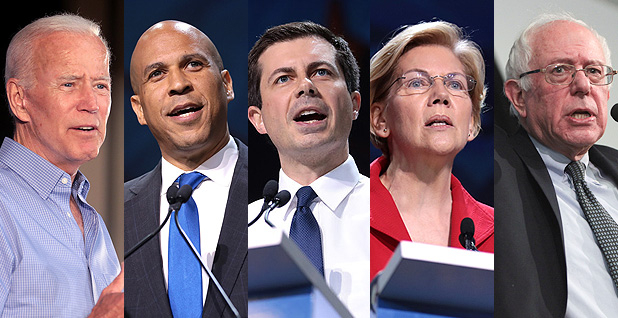 Not all Democratic presidential candidates support a "fracking ban," but nearly all of them want to ban oil and gas drilling on the country’s public lands.

Yet such a limited ban wouldn’t do much to slow drilling or climate change, since federal public land accounts for about one-tenth of drilling in the country.

Still, it’s a seemingly unprecedented level of hostility from a major political party toward domestic energy production. Even centrists in the nomination fight see little risk in attacking the industry as they try to protect their left flank and top one another in their devotion to fighting climate change.

The anti-drilling fervor risks losing votes next November in key oil and gas states like Pennsylvania and Ohio. But if the Democratic nominee wins, it could mean a difficult four years for the oil business. And industry is starting to worry.

"The rhetoric is going to 11," said Kathleen Sgamma, president of the Western Energy Alliance, an oil and gas group. So if a Democrat wins, she added, "the regulation is going to go to 11."

None of the contenders publicly opposes a federal land drilling ban, but not all have offered an opinion.

Sen. Elizabeth Warren (D-Mass.) has offered few specifics on how she’d "ban fracking everywhere" but has a detailed plan for public land that includes a drilling ban.

Even Julián Castro from Texas, the country’s biggest oil producer, said he would end permitting on federal land. Former New York Mayor Michael Bloomberg hasn’t taken a position, and his campaign did not respond to requests for comment.

The only candidate to oppose such a ban was Montana Gov. Steve Bullock, who dropped out in early December.

The pile-on against drilling public lands reflects the rise of climate change as an issue for Democratic voters and industry’s deepening association with Republicans.

It’s a U-turn from President Trump’s "energy dominance" agenda. But the push also veers sharply from the policies of previous Democratic presidents, including Barack Obama.

Obama supported more regulation than Republicans, but increasing production and use of natural gas was also part of his "all of the above" energy strategy. He’s fond of noting that the nation’s drilling boom happened during his watch (Energywire, Nov. 28, 2018).

Hillary Clinton promoted shale gas drilling as Obama’s secretary of State. In the 2016 presidential race, she resisted calls for a fracking ban by saying she supported stronger regulation.

Today’s anti-drilling rhetoric makes some centrist Democrats in public lands states uneasy. Ken Salazar, Interior secretary under Obama and a former senator from Colorado, says environmental security is important. But he says energy production is also a matter of national security and economic security, and he thinks Democrats should take that into account.

"I know there are some in my party who do not agree with that," Salazar said in a brief phone interview.

Oil companies have long enjoyed a bond with the Republican Party. But in past years, there was a cohort of Democrats who could be relied on to support the industry, such as former Louisiana Sen. Mary Landrieu or former Texas Rep. Gene Green.

Both are gone now, along with other pro-oil Democrats and Republicans who voted with environmental groups. And, in a bit of a twist, the country’s abundant oil supply has somewhat numbed politicians to fears of price spikes.

Industry leaders insist that they still have Democratic friends in Congress. The Democratic leaders Durbin pointed to, though, are governors such as Michelle Lujan Grisham in New Mexico who support drilling but also more regulations on it than their Republican counterparts.

A universal fracking ban, including on private lands, could put thousands of people out of work and affect gasoline prices, depending on how it’s carried out. It would also be very difficult for a Democratic president to enact (Energywire, Dec. 6, 2019). Because the federal government controls federal land, a president and his administration have far wider latitude to decide what happens on it. For instance, a president could try to use an executive order to halt new drilling permits.

Though banning drilling only on public land would be much easier, it would also have far less effect.

The federal government controls about 640 million acres, most of it concentrated in 12 Western states, including oil producers like New Mexico, Colorado and Wyoming (Greenwire, Jan. 13, 2016).

The shale drilling boom, though, has taken place largely on private land in places like Pennsylvania and Texas.

Although it would be easier than a universal fracking ban, a ban on public lands drilling would be difficult to do on day one of a new administration.

An executive order ending drilling on public lands would probably get tied up in lawsuits. "We will be in court the next day," Sgamma said. Certain laws mandate that the government offer land for leasing. Within that, however, administration officials have a lot of discretion.

An administration could order large, complicated environmental reviews for drilling; could restrict leasing to its bare minimum; and could impose new regulations.

"They have a lot of levers on public lands," Sgamma said.

Some have argued that a Wyoming federal judge’s ruling blocks the federal government from regulating hydraulic fracturing — a key part of developing a well — even on federal land. But the 10th U.S. Circuit Court of Appeals vacated the ruling in 2017 (E&E News PM, Sept. 21, 2017).

Although a ban on public lands drilling might not create a large effect on the industry or the economy, it could have an outsize effect on certain areas, most notably New Mexico.

The Permian Basin is usually identified with West Texas. But it spills across the state line into New Mexico, where state revenue from the boom has helped Lujan Grisham’s administration expand education and other popular programs. While most of the Texas drilling has been on private land, the New Mexico surge has been on land controlled by the Interior Department.

By one estimate, a federal drilling ban would have blocked about 40% of the wells drilled last year in two of the state’s top oil counties (Energywire, Nov. 4, 2019).