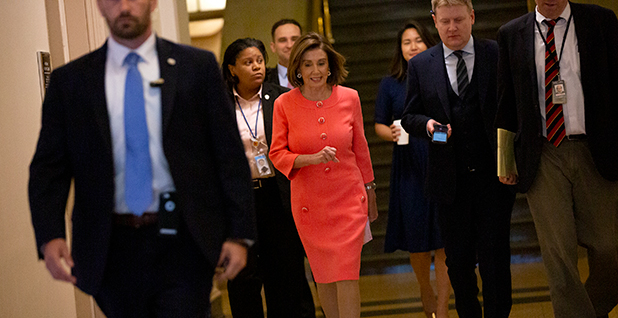 With the Senate brick wall ahead of them, House Democrats are using the appropriations process to press their environmental agenda and weaponize GOP climate views that they see as out of sync with the mainstream.

As the House continues considering two packages of fiscal 2020 spending bills this week, Democrats are allowing floor votes on amendments, in part to frame Republicans as extreme and push back on the Trump administration’s energy and environmental policy, particularly pulling out of the Paris climate agreement.

Both parties have used the spending process in recent years to feed their base and take swipes at the opposition, and both see appropriations amendments and riders as an especially important tool in divided government.

For the current House majority, that means voting on the issues major environmental organizations have put into focus for the party: keeping the United States in the Paris accord, fighting for climate and clean energy research dollars, and blocking what they see as anti-environmental development.

In one example yesterday, Democrats shot down four GOP amendments — some of them redundant — that would have blocked funding for various U.N. climate initiatives and stripped language in the State Department spending bill aimed at keeping the United States in the Paris Agreement (see related story).

Republicans asked for recorded votes on the amendments, approved for debate by the Democratic-controlled Rules Committee, often seen as a proxy for leadership’s views.

Its chairman, Rep. Jim McGovern (D-Mass.), said it is to his party’s advantage that more people see Democrats as committed to climate science and the GOP as opposed to it.

"I think Republicans are on the wrong side of history when it comes to climate change, but if they want to bring these awful amendments to the floor, I will work with them to bring them up and then defeat them — hopefully soundly," he said.

The language that remains in the State and Foreign Operations bill mirrors the "Climate Action Now Act," H.R. 9, the pro-Paris measure that passed the House along largely partisan lines but was immediately blocked by McConnell.

Like other Democratic riders peppered throughout the two omnibus packages working their way through the House, the Paris language could easily be nixed as negotiations move through the Senate.

But as far as Democratic leadership is concerned, the House can have an up-or-down vote on the Paris Agreement over and over again. It sees the Republican amendments as self-defeating offerings from a GOP conference that’s still highly divided on climate.

"To some extent, every chance we have to spike the football against what Trump has done on Paris is a good thing," Rep. Jared Huffman (D-Calif.) told E&E News.

‘Heck of a coalition’

Republicans have already proposed other red-meat amendments to the Interior-EPA title on the second so-called minibus package, set to clear the House by the end of next week, that would block implementation of the Obama-era Clean Power Plan and methane rule.

It’s not clear whether they will get consideration on the floor, but if the Rules panel allows them to come up for a vote, they would likely go down with a similar effect.

Meanwhile, Democrats are pushing their own proposals to get the GOP on the record. One amendment expected for a vote tomorrow would aim to block the Pebble mine in Alaska by prohibiting funds for the Army Corps of Engineers to finalize the environmental impact statement.

Huffman, who sponsored the amendment, said it will be the first time Congress has formally weighed in on the controversial project after years of legal sparring between industry and environmental groups. He noted that environmental and Alaska fishermen’s groups are pressing members to support the measure.

The League of Conservation Voters is circulating a letter to members asking them to vote for the measure, while on the other side, the Competitive Enterprise Institute has put out statements of opposition.

For now, Huffman thinks he’ll get enough Democrats to support the measure for it to pass, even if the caucus isn’t unanimous.

"I don’t know about all Democrats, but I think we’ve got a heck of a coalition here," he said. "I know that a lot of the outside groups are really fired up."

More generally, House Speaker Nancy Pelosi (D-Calif.) said Democrats are putting spending bills on the floor that reflect "our values to meet the needs of American people," and rank-and-file members, particularly her allies, appear to agree.

Rep. Kathy Castor (D-Fla.) said that although the Energy and Commerce Committee will look to move other energy legislation, including an energy infrastructure measure and various efficiency bills, appropriations is an important piece of the messaging puzzle.

"Look at these appropriations bills as they all move through," Castor, who sits on Energy and Commerce and chairs the Select Committee on the Climate Crisis, told reporters last week. "We’re going to try to highlight all of the climate policies that are contained there, too."

‘I’ll have this debate all day long’

If there’s any fear that the amendment votes will bubble back up in messaging wars or on the campaign trail, most Republicans aren’t showing it.

For one thing, it could all be a moot point in the Senate, where appropriators are waiting on a broader budget deal to even begin considering their fiscal 2020 bills and where the GOP will have more power to block the Pebble and Paris language.

Senate lawmakers struck a deal to limit riders and expedite spending bills last year, but without a top-line number, the outlook for the policy provisions coming out of the House is hazy.

"What we proved last year is if you have an agreement on most riders not being in the bill, you can accomplish things," said New Mexico Sen. Tom Udall, the top Democrat on the Senate Interior and Environment Appropriations Subcommittee. "But what we seem to be proving this year is if you don’t have a number, you’re just stalemated in deadlock."

On the House side, Rep. David Joyce of Ohio, the top Republican Interior-EPA appropriator who tends to be more in line with his party’s moderates, was skeptical of offering the climate amendments, but hard-liners — and even some Republicans who nominally accept climate science — appeared ready for the debate.

"We may lose some Republican moderates, but we are not going to stop saying it," said Gosar, a leading denier of man-made climate change.

Republicans, of course, have their own experience with environmental riders and funding prohibitions from their time controlling the House.

"They would actually play politics with the amendment process?" Rep. John Shimkus (R-Ill.), a senior Energy and Commerce member, joked when asked about the climate amendments being offered by Republicans this year.

The GOP for years included a clause in its State Department spending bill that blocked money for the Green Climate Fund, as well as a provision that stifled Obama-era restrictions on investments in overseas coal-fired power plants by the Overseas Private Investment Corp., the Export-Import Bank of the United States and the World Bank.

Republicans also attempted to use appropriations bills to target various other Obama initiatives, including EPA’s Clean Water Rule and protections for sage grouse and prairie chickens.

Some of those ideas have returned this year to be rejected by Democrats in one form or another. But many Republicans were unfazed with Democrats moving in the opposite direction, and some welcomed the chance to debate what they see as no-brainer policy positions or easy political fodder for their own base.

"I’ll have this debate all day long," climate select committee ranking member Garret Graves (R-La.) said of the Paris Agreement. "I can’t believe that people would go out there and say that this is good."

Graves is a vocal critic of the agreement, and on the select committee, he has helped shape his party’s views on climate change, often acknowledging the role of man-made emissions but talking up natural gas and touting reductions over the last 20 years.

Shimkus added that GOP lawmakers were not being told how to vote on the amendments, noting that members could benefit from the votes in different ways based on the makeup of their districts.

"It may brandish their credentials with more liberal green activists in their districts," he added. "And there are some districts where constituents aren’t happy about you being more moderate in this discussion."

But although the debate won’t hurt them, Republicans need to be clear in explaining why they are offering the policies rather than allowing Democrats to define them, said Rep. Jeff Duncan (R-S.C.), an Energy and Commerce member who co-sponsored one of the Paris Agreement amendments that got a vote last night.

"The Republicans need to be very clear on what they are trying to do and how they feel about climate change in general," Duncan said. "We can say the Earth is changing. But is man responsible for it? And do things like the Paris climate accord make a difference when some of the Earth’s biggest polluters aren’t adhering to it?"

Republicans have slowly abandoned some of those talking points in recent months, particularly some of their more misleading lines that stress uncertainties in climate science. But only a handful crossed party lines to keep the Paris language in.

And for lawmakers like Joyce, it may not be the right forum. "I am all for having a discussion about climate change," Joyce said. "I just don’t know if the appropriations process is the place to be doing it."