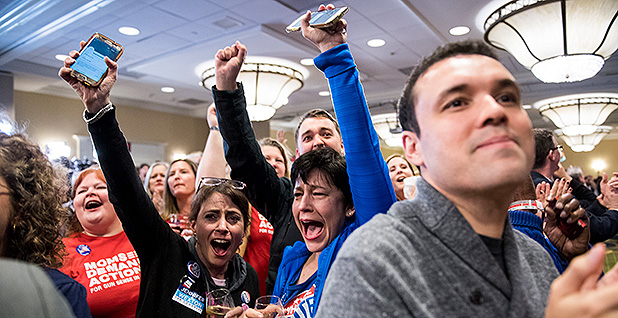 The party of the president usually loses seats in the off-year elections, and last night was no exception as Democrats won big in the House, captured several key governor’s races and bested an incumbent GOP senator out west.

In a seismic reversal and repudiation of the Trump administration, Democrats took at least 26 seats as of early this morning to retake the House for the first time in eight years.

Led by a diverse slate of candidates featuring a record number of women, the party cleaned up in suburban districts — and even some surprise rural precincts — across the nation.

The news dents the president’s legislative agenda, while opening the possibility of investigations and subpoenas of the administration and Trump’s personal finances.

But a tough night for red-state Democrats left the party short on a long-shot bid to take both chambers. Democratic Sens. Joe Donnelly of Indiana, Heidi Heitkamp of North Dakota and Claire McCaskill of Missouri. Florida’s Bill Nelson also appears headed for defeat.

And taking the House and a substantial gain in governorships left party leaders and greens declaring a successful midterm cycle.

During a event at a hotel within steps from the Capitol, a jubilant House Democratic Leader Nancy Pelosi was introduced as "the next speaker of the House."

"Today is more than about Democrats and Republicans," Pelosi (D-Calif.) told the crowd. "It’s about restoring the Constitution’s checks and balances to the Trump administration."

President Trump did not appear in public but, as expected, tweeted that the night was a "tremendous success" for his side. White House aides were pushing a similar spin.

By gaining more than two dozen seats in the House, Democrats positioned themselves as a forceful opposition to the administration in the next Congress. Environmental advocates hailed the possibilities of a blue chamber.

"It’s long past time for the House to do badly needed oversight and accountability of a dangerous administration bent on rolling back common-sense protections for our environment and our health," said Tiernan Sittenfeld, senior vice president for government affairs at the League of Conservation Voters.

"Now we need to accelerate our transition to clean energy and act on climate, and we look forward to working with the new Congress to do just that."

The green advocacy group was one of the cycle’s top spenders, surpassing $80 million, and targeted many of the key swing districts that trended blue on Tuesday night.

The House win was visible early in the evening, as Democratic candidates flipped three seats in Virginia: in the 2nd, 7th and 10th districts. All three made LCV’s list of priority spending races.

Other early wins included two South Florida GOP-held districts where issues of climate are central. Rep. Carlos Curbelo, co-founder of the Climate Solutions Caucus, lost to Democrat Debbie Mucarsel-Powell. One of the party’s most vulnerable incumbents, Curbelo introduced legislation for a carbon tax earlier this year but could not prevail in a district Hillary Clinton won handily in the 2016 presidential race.

In the next district over, Donna Shalala, a former Clinton administration official, won an open seat vacated by Rep. Ileana Ros-Lehtinen, one of the GOP’s most outspoken members on climate.

Democrats picked up expected but needed wins in Pennsylvania and New York, along with surprises such as Democrat Colin Allred in Texas, who beat two-decade incumbent Rep. Pete Sessions, chairman of the influential House Rules Committee.

And in California, where Democrats targeted more than a half-dozen incumbent GOP House members, their efforts paid off in at least one of them. Long-term Rep. Dana Rohrabacher (R) appeared to be narrowly defeated by Harley Rouda.

GOP in ‘stronger position’ than predicted

Republicans mourning the loss of the chamber can take solace in results for the Senate, where many of the most vulnerable Democrats fell. This includes Heitkamp, the party’s staunchest defender of oil and gas. Rep. Kevin Cramer (R) defeated her handily, 55 percent to 45 percent.

In a press release, Heitkamp said that serving as North Dakota’s senator "has been the highest honor of my life — because every day when I wake up, I’m thinking about how I can fight for rural America."

Even before those results came in, any Democratic hopes had already evaporated as Republican businessman Mike Braun vaporized incumbent Sen. Joe Donnelly in Indiana. Braun was ahead by more than 10 points when the race was called.

No state was a bigger disappointment for Democrats and greens than Florida, where Gov. Rick Scott (R) beat Nelson, while DeSantis edged out Gillum. Issues of water pollution dominated the race, fed by the algal blooms that coated the state this summer.

"Republicans stand in a stronger position than nearly anyone predicted," said Republican National Committee Chairwoman Ronna McDaniel in a statement.

It could have been even worse. In West Virginia, which has become one of the most conservative states in the nation, Manchin easily won re-election against Attorney General Patrick Morrisey (R).

An ally of coal and an outlier in the party on issues of environmental protection, Manchin walked a fine line to his third term in office, hammering Morrisey on health care, while voting to confirm Supreme Court Justice Brett Kavanaugh.

Even as red-state Democratic senators fell, Democrats can claim an overall good night in the Midwest and Rust Belt, areas that Trump carried in 2016. Pennsylvania and Minnesota stayed blue, while Illinois, Michigan and Wisconsin flipped.

The Rust Belt and Great Lakes states were vital battlegrounds in 2016 — and will be again in two years — but Democratic incumbent Sens. Sherrod Brown in Ohio, Bob Casey in Pennsylvania, Tammy Baldwin in Wisconsin and Debbie Stabenow in Michigan were never in real danger Tuesday night.

The party also picked up a surprising win in Kansas, where Democrat Laura Kelly beat Secretary of State Kris Kobach, an ally of Trump.

While overshadowed by the congressional developments, the gubernatorial results will have far-reaching implications. All the candidates elected will have a hand in House redistricting after the 2020 census.

In all, environmental groups picked up most of their targeted races, flipping the Maine governorship blue, while Gov. Kate Brown held on in Oregon.

In tandem with state groups, LCV spent more than $30 million on gubernatorial races and state elections. In September, LCV announced that a record 1,400 candidates were running on platforms backing 100 percent clean energy by 2050. These included gubernatorial contenders Polis, Brown, Evers, J.B. Pritzker in Illinois and Gretchen Whitmer in Michigan.