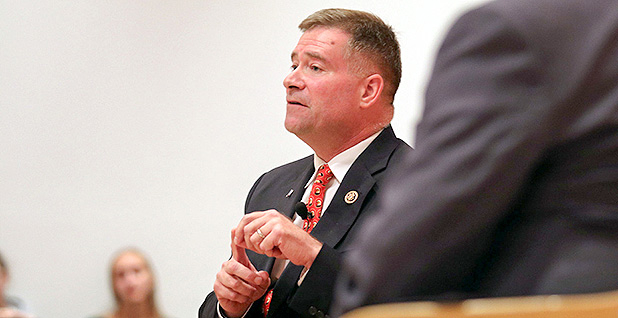 Rep. Chris Gibson (R-N.Y.) has been a key member of his party pushing for lawmakers to discuss action against climate change. Photo by Ed Burke, courtesy of Gibson's office.

As Rep. Chris Gibson (R-N.Y.) prepares to take a step back from politics, the retiring lawmaker sees climate change as an issue where the House GOP could make inroads over the next two years.

Gibson, who began his third term in Congress by announcing it would be his last, is undeterred by President-elect Donald Trump’s past remarks challenging the overwhelming consensus on climate science and Trump’s appointment of climate change skeptic Myron Ebell to lead his U.S. EPA transition team.

Emerging from a recent GOP caucus meeting with Vice President-elect Mike Pence, Gibson told E&E News he believes Trump and his administration are "going to study the issue, and I think, you know, the members here are going to play a role in that."

The 52-year-old retired Army colonel sees an opportunity for Republicans to revive a measure he carefully drafted last year (E&E Daily, Sept. 17, 2015). Known among climate change advocates as the "Gibson resolution," it affirms that human activity contributes to climate change and endorses taking "meaningful and responsible action now" to address the problem.

Fourteen Republicans have signed on as co-sponsors. The latest addition was another retiring member, Florida freshman Rep. Curt Clawson, who added his name to the list six days after the election.

Gibson said the election has made it "all the more important that we reintroduce the resolution and we continue to build numbers, have the conversation and find common ground — and that’s what I think we’ll be doing."

Activists with Citizens’ Climate Lobby, the group that built support for the resolution, visited Republican and Democratic offices earlier this month in an effort to rebuild its ranks of supporters. One volunteer reported being pressed on whether there would be another "Gibson resolution" in the 115th Congress (E&E Daily, Nov. 16).

Gibson’s voting record shows he has evolved on green issues. During his first year in Congress, he voted to open the outer continental shelf to oil drilling, which contributed to a 17 percent score from the League of Conservation Voters. By 2015, the LCV scorecard had Gibson at 46 percent.

"I’m a firm believer that if we as conservatives can get in this space about managing and safeguarding precious resources, then our ideas can be in the marketplace of ideas," Gibson said. He added, "Right now, there’s a prevailing thought that any policy ideas on the environment have to come from the left. I don’t believe that. I don’t believe that at all."

"Quite frankly, if we do this in a smart way, which is the only way I’ve been advancing it, then you are going to grow jobs, too, because, you know, you’re going to have research development and prototyping of renewable energy sources to complement some of the bridge resources such as natural gas and nuclear power," Gibson said.

"It’s also going to be good for our foreign policy," he added.

Finding common ground with Democrats on the environment and other issues, including gay marriage, helped Gibson carve out a reputation as a rare centrist in the House. He considered a 2018 run for governor of New York, where no Republican has won statewide office since 2002.

Despite warm support for his gubernatorial exploratory committee, which reportedly raised more than $100,000 over the course of three months, Gibson opted to return the money to donors rather than pursue a bid. He chose academia and spending more time with his three teenage kids (Greenwire, May 3).

"They’re looking forward to spending more time with their dad," he said.

Though Gibson talks as if he will continue to carry the mantle for clean energy, post-Congress plans for the Iraq War veteran and Purple Heart recipient do not include green issues.

Gibson has taken a job as a visiting professor of leadership studies at Williams College in western Massachusetts, not far from his upstate New York district. He said he will teach a course on leadership and political change and a course on the politics of American national security.

Gibson wrote a book on national security decisionmaking that was published in 2008. He told E&E News that he plans to write another.

Gibson suggested that Rep. Carlos Curbelo (R-Fla.), co-founder of the bipartisan Climate Solutions Caucus, may take up his mantle as the standard-bearer of the GOP’s climate change advocacy efforts. Gibson called Curbelo "a natural leader" on the issue.

Curbelo told E&E News he wants to continue building the caucus, but his office did not respond to an inquiry about the Gibson resolution.

"Obviously those of us who represent coastal communities are probably more sensitive to it than others, so I think if the [EPA’s] Clean Power Plan gets scrapped, there’s going to be even a greater urgency to come up with a different solution or a better way," Curbelo said.