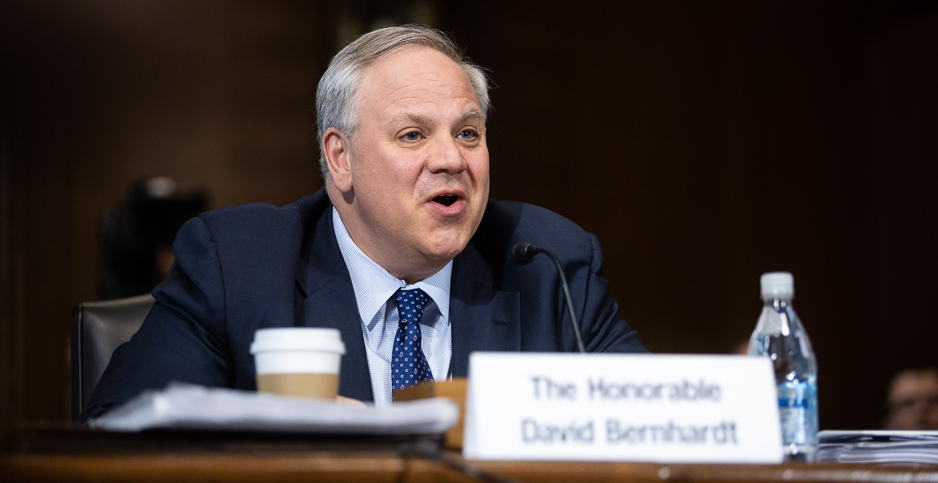 Interior Secretary David Bernhardt said today officials have "pulled out" a pandemic influenza plan first prepared in 2007, as the department of about 70,000 employees adapts to the rapidly unfolding coronavirus crisis.

Questioned at the Senate Energy and Natural Resources Committee, Bernhardt disclosed that he has appointed Interior Deputy Secretary Katharine MacGregor to "look at" the plan and update it. Individual Interior bureaus have also been directed to update their specific plans.

"We’ve already taken a whole series of steps, and we’ll continue to," Bernhardt said. "We’re taking it extremely seriously, as we work through particular issues."

Bernhardt said he is being briefed daily on developments and has taken part in multiagency discussions.

"So far, we have not had anyone in the department who has contracted this illness," Bernhardt said, though he added that "we have had, I believe, one employee who was on a cruise ship."

That employee works at the Office of Natural Resources Revenue in Denver and returned from a cruise where he or she may have been exposed to the COVID-19 virus.

Although the employee showed no symptoms and no confirmed infection near the end of a 14-day self-monitoring period, all Denver ONRR staff were permitted to telework last week.

"As a medical professional, I believe the risk to the employee is low and the risk to the office is extremely low, if not unlikely," said Dr. Kate Sawyer, Interior’s Office of Occupational Safety & Health chief medical officer.

Bernhardt said that "protocols" have been established for protecting students and teachers at Bureau of Indian Education schools and that "we are trying to communicate aggressively with employees to keep them informed."

So far, Bernhardt said, "we have not seen a dip" in Asian visitors to national parks.

Bernhardt previewed his remarks — including MacGregor’s appointment to lead the response efforts to the COVID-19 virus — in a letter to Interior staff last week.

"While it is important that we be vigilant, each of us needs to base our decisions and actions on accurate information," Bernhardt wrote.

He added that Interior will rely on the emergency plan composed in 2007 to address the then-threat of H5N1, a bird flu.

A copy of the emergency plan available on Interior’s website and a similar guide published in 2009 to address the H1N1 virus both highlight how the agency will function in the event of epidemic "waves" that could last between two and three months.

"An influenza pandemic has a greater potential to cause rapid increases in death and illness than virtually any other natural health threat," the 2007 plan states. "Planning and preparedness before the next pandemic strikes — the inter-pandemic period — is critical for an effective response."

Both documents, which do not appear to have been updated since their respective releases, emphasize basic strategies to combat viral outbreaks, including "social distancing," the use of proper techniques for coughing, and an emphasis on telework policies and "alternate operating facilities" that could theoretically serve as both housing and office for staff.

"During a severe pandemic, offices need to plan for employee absenteeism rates reaching as high as 40 percent during the peak weeks of a community outbreak," the 2007 document states.

Interior’s plan indicates the department’s focus must also be on "maintain[ing] the essential functions and services" of its bureaus, as well as "communicat[ing] effectively with DOI’s stakeholders during a pandemic."

"During health emergencies, the objective of the Department is to continue executing its activities to the greatest extent possible while limiting the spread of disease, sustaining infrastructure, and mitigating impact to the economy and the functioning of society," the 2007 plan states.

Much of the original emergency plan also focuses on responses related to the spread of avian flu among livestock.

"At the Department of the Interior, I think that we’ve handled it in a way that we would a normal situation, an event," Bernhardt said, "and we’re managing."