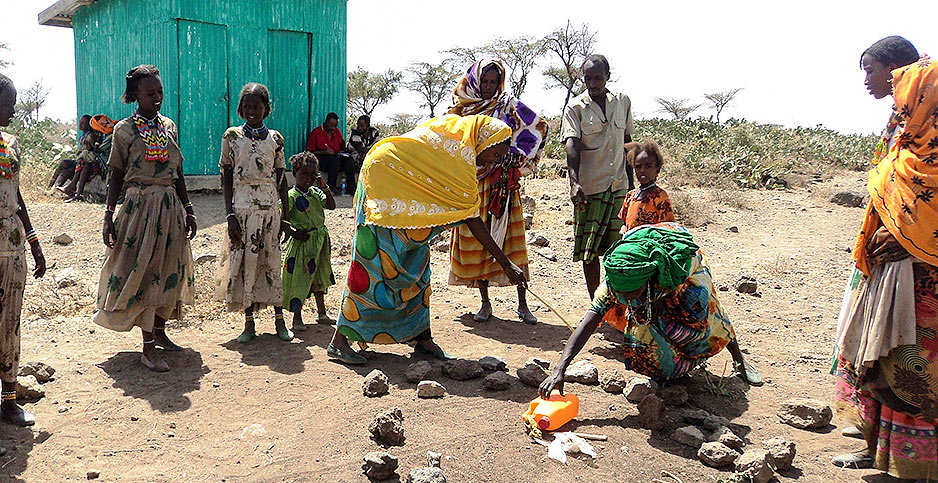 Pastoralist women in Ethiopia participate in an activity on resource mapping. The program is funded by the U.S. Agency for International Development and could face budget cuts. Catholic Relief Services/Resilience Through Enhanced Adaptation, Action-learning and Partnership Activity

The State Department’s climate team is operating on autopilot as it waits for a departmental reorganization that will likely lessen its clout.

Staff rosters are shrinking at the agency’s Office of Global Change and the Special Envoy for Climate Change (SECC) office as people leave for other opportunities or are terminated under a Trump administration that’s determined to make the government smaller. While those offices continue to fund climate change programs, staff members are said to be avoiding expenditures that would raise the hackles of the Trump team.

The mood is markedly different from what it was when former Secretary of State John Kerry made climate change a top departmental objective under President Obama.

"I think the whole thing is in limbo until they figure out this reorganization," said Paul Bodnar, who oversaw the National Security Council under Obama.

Sources familiar with the inner workings of the State Department say the SECC office appears to still exist in a diminished form, though it could be scrapped soon. Secretary of State Rex Tillerson said he plans to do away with many of the special envoy posts that proliferated under Obama as part of his restructuring. That plan is due to be released by Sept. 15. The climate envoy’s office was never authorized by Congress, and its budget was cobbled together from the department’s discretionary funds. So Tillerson has broad authority to ax it.

Sources say about three staff people remain in the envoy’s office. The former deputy special envoy, Trigg Talley, who headed the office when Trump took over, is said to have completed his rotation and is now back at his previous position directing the Office of Global Change within the Bureau of Oceans and International Environmental and Scientific Affairs (OES). A State Department spokesman declined to confirm current staffing arrangements.

Experts outside the department say diminished staff levels and changes to the reporting structure aren’t a major problem. More concerning, they say, is the potential loss of key staffers with institutional knowledge.

"To me, what really matters is not how the ‘org’ chart changes but rather the caliber of the people who are doing these jobs and the extent to which they understand how international climate diplomacy works," said Bodnar, who is now with the Rocky Mountain Institute.

"The crew that’s there now, while smaller than it was before, has moved through and contributed to the most intensive period in the history of climate diplomacy," he added, referring to its role in the Paris Agreement. "So they know what they’re doing."

The two offices, which worked together throughout the Obama administration to direct U.S. participation in the United Nations climate talks and a host of other ventures, have already lost veteran staff during this year’s transition. Departures from the envoy’s office include its congressional liaison, chief of staff and a China expert.

The global change office lost key career staff to attrition and when contracts expired after Trump’s January inauguration. The global change office could host the only State Department team overseeing U.S. participation in the Paris Agreement, for as long as it continues, and the U.N. Framework Convention on Climate Change and the Montreal Protocol.

Dan Reifsnyder, State’s deputy assistant secretary for environment who co-chaired negotiations leading to the Paris deal, has also retired recently. Sue Biniaz, a former legal chief for the climate envoy’s office and a lead negotiator during the Paris talks, departed earlier this year. Numerous other architects of the 2015 climate deal left, as well.

With all the turnover, agency alumni are relieved that Talley is still there to provide institutional memory.

"With Dan gone, Trigg Talley is the most senior person left at the State Department who has worked on climate negotiations; he has tremendous integrity and the respect of his colleagues around the world as a skilled and extremely fair negotiator," said Andrew Light, a former State Department climate official who’s now at the World Resources Institute.

Trump’s announcement in June that the United States would depart the Paris pact won’t be realized until November 2020. In the meantime, the administration has sent mixed messages about whether it will really withdraw. An agency cable was sent to U.S. diplomats this month instructing them to vaguely refer to "re-engagement" discussions about Paris. The same cable declares that the United States would take an active role to defend its interests in the negotiations on the Paris rulebook up until it leaves the compact.

Talley is in line to lead the U.S. delegation at a climate summit in Bonn, Germany, in November. Former State Department colleagues say he’s able to defend U.S. interests in the talks — interests he’s been dealing with since the Clinton administration.

"It’s really critical that there be that kind of expertise at State," said Biniaz.

If the Office of Global Change survives Tillerson’s reorganization, its mission could be trimmed by budget cuts.

The president has proposed cutting $2.3 million from OES’s budget in fiscal 2018, requesting $36.8 million and 216 personnel for a bureau covering issues that range from the environment to outer space. The spending plan would also pare back funds for climate change aid and diplomacy, including formally ending the Obama-era Global Climate Change Initiative (GCCI), which funded almost all climate diplomacy work at State and other agencies during the last administration.

Obama’s fiscal 2017 request to Congress asked for $1.3 billion for the GCCI, which covered everything from dues for the UNFCCC and the Intergovernmental Panel on Climate Change (IPCC) to U.S. Agency for International Development projects meant to help poor countries cut emissions and prepare for the impacts of warming.

Yet the GCCI is a construct, not a congressionally mandated entity, and some of its work might go forward in the Trump era under a different name. The fiscal 2018 budget calls for $102.4 million for the Global Environment Facility, a fund that previously fell under the GCCI. The Trump spending plan says it "benefits the U.S. economy and environment by addressing many external environmental problems that affect our domestic health, safety, and prosperity."

The spending bill by the House State, Foreign Operations and Related Programs Appropriations Subcommittee includes some money for a multilateral funding facility for biodiversity. It would also provide funds to help poor countries implement the phase-down of heat-trapping hydrofluorocarbons required under a recent amendment to the Montreal Protocol for ozone-depleting substances that the United States has yet to ratify.

The Senate State, Foreign Operations and Related Agencies Appropriations Subcommittee is chaired by Sen. Lindsey Graham (R-S.C.), a moderate on climate action. Advocates hope the panel will be more generous with funding for climate and clean energy diplomacy, even if it’s not labeled under the GCCI.

"In terms of the leadership of that Senate Appropriations subcommittee, it’s reality-based," said Alden Meyer, director of strategy and policy for the Union of Concerned Scientists. "But again, it’s a question of where the calls get made. Do Lindsey Graham or others have complete freedom of movement on that? I don’t know."

Under Obama, State used its discretionary funds to cut checks to poor nations through the U.N. Green Climate Fund. The Trump administration has ruled that out.

The continuing resolution now being used to fund the federal government doesn’t bar U.S. dues being paid to the IPCC or the UNFCCC. But observers worry that future spending bills might. State says it is currently up to date on its UNFCCC dues, but there is some indication that recent contributions have been provided to a supplemental fund instead of being counted as formal dues to the climate body.

Officials from both the State Department and USAID, which implements many projects funded by the GCCI, say money allocated in the CR is still flowing to projects abroad that reduce greenhouse gas emissions or improve resilience.

"We are continuing to work with various partners to implement foreign assistance programs that were funded in prior years," said a State Department official. Both USAID and State participate in oversight and management of programs previously funded through the GCCI, he noted.

A USAID spokesperson said GCCI funding in the past has been provided to country offices to use for projects and programs. The money provided under the CR is still being allocated.

Other sources say the funds are drying up or have been caught in paperwork logjams. Some describe the funding shortfalls as a victim to career staff’s unwillingness to get out in front of Trump administration policy — a process slowed by the fact that numerous bureaus like OES still have no political appointees in place.

These sources say projects abroad that help poor countries may have to end unless they find more support on Capitol Hill and from leaders like Tillerson. Even with diminished budgets, the secretary of State is likely to have discretionary funds he could use for clean energy projects or sustainable development objectives, if he cares about them.

"That’s the challenge, is what do Tillerson and his advisers think is supportable and advisable if they have the flexibility and the budget?" said Meyer. "They may be able to reorient some of those funds to different accounts if their hands aren’t tied by the Hill, so that’s the real unknown."

In addition to USAID, funding under the GCCI has gone to support projects at the Energy Department, like U.S. participation in the Clean Energy Ministerial launched in Paris by former Energy Secretary Ernest Moniz.

It was also used by the State Department’s Bureau of Energy Resources to help Morocco scale up clean energy deployment and to sponsor a CEO exchange between members of the Edison Electric Institute and utility-sector startups in Africa.