‘Deregulation is not always helpful for manufacturing jobs’ 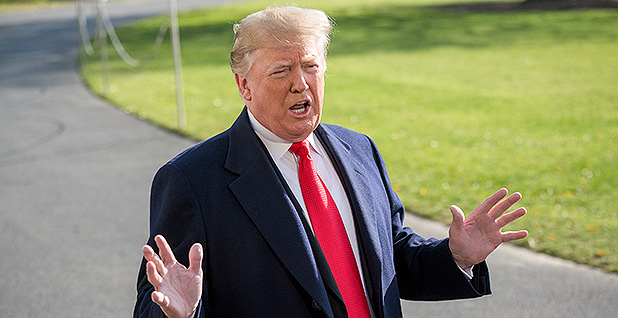 President Trump promised to revitalize the manufacturing sector after decades of decline, a message that has especially resonated in the Midwest, where manufacturing has an outsize share in total state employment.

But his rollbacks of key Obama-era environmental rules could test that pledge.

The Trump administration has proposed to rework tailpipe pollution rules for cars. It’s also looking to unwind actions the Obama administration took to phase out the use of potent heat-trapping gases known as hydrofluorocarbons, or HFCs.

Both moves could spell bad news for the manufacturing sector. That’s because auto companies have already made big investments in technology aimed at improving vehicle fuel efficiency. Similarly, air conditioning and refrigeration companies have invested in replacements to the planet-warming gases.

And those investments have created good-paying jobs that could go away, industry sources said.

"These are jobs that will be lost to other markets," Laurie Holmes, senior director of environmental policy at the Motor & Equipment Manufacturers Association, said of the car rule. "A lot of these jobs will probably be lost to China because they are moving forward with the fuel efficiency standards and with electric vehicles.

"We know that one area that the Trump administration cares about is manufacturing jobs," Holmes added. "But I would say that it’s important to understand that deregulation is not always helpful for manufacturing jobs."

Trump’s regulatory rollbacks could reverberate in the Midwestern states that helped him clinch victory in 2016. The top five manufacturing states — Indiana, Wisconsin, Iowa, Michigan and Alabama — all backed Trump in the election.

The impending closure of a General Motors Co. factory in Ohio illustrates this dynamic.

Speaking to a group of autoworkers in Ohio’s Mahoning Valley last year, Trump promised that jobs were "all coming back. They’re all coming back. Don’t move. Don’t sell your house."

But GM announced this week that it would close the assembly plant in Mahoning Valley and lay off hundreds of workers, prompting a national outcry.

To be sure, GM’s decision stemmed from a variety of factors, including the administration’s tariffs on imported steel and aluminum. But at least one lawmaker — Ohio Democratic Rep. Tim Ryan — linked the decision to Trump’s rollback of Obama-era clean car rules (E&E News PM, Nov. 26).

David Cohen, a political science professor at the University of Akron, said Midwestern constituents may feel that Trump made them empty promises. That could muddy his chances of being re-elected.

"When people in these areas see their jobs going away and their plants closing, they’re going to connect that with the president, who has told them all along that they should not move away, that they should keep their house, and that the jobs are going to be there," Cohen said.

"You know, Donald Trump cannot win a second term to the presidency without carrying the industrial Midwest," he added. "The electoral math just doesn’t work. If he is the Republican candidate in 2020, the road to the White House goes through Ohio, Michigan and Wisconsin."

In 2008, General Motors and Chrysler signaled that they were on the verge of bankruptcy. President George W. Bush agreed to bail them out — a politically unpopular decision. But he handed their long-term future to his successor, President Obama.

When Obama took office, he oversaw a comprehensive bailout of GM and Chrysler, although he imposed a number of conditions aimed at helping them stay competitive. One was that the companies must set fuel efficiency standards.

In 2011, EPA and the National Highway Traffic Safety Administration got to work on drafting the first-ever greenhouse gas and fuel economy standards for cars. And when the agencies issued those rules in 2012, they expected them to encourage job creation.

"The agencies anticipate that these final standards will … spur economic growth and create high quality domestic jobs," EPA and NHTSA wrote in their 2012 final rule.

The agencies’ reasoning went like this: Achieving greater fuel efficiency in vehicles would require new technologies. And more workers would be needed to develop and install those technologies.

A recent report from the BlueGreen Alliance, which aims to unite environmental and labor groups, bore out this thinking. It found that more than 1,200 factories in 48 states — comprising 288,000 workers — are building technology that improves fuel economy in vehicles.

The top five states for jobs in fuel-efficient vehicle technology were Michigan, Indiana, Ohio, Tennessee and Kentucky, the report found.

"Over the past decade, we’ve seen a real comeback in the automotive sector. And the fuel economy standards have been a critical part of that recovery," said Zoe Lipman, director of the BlueGreen Alliance’s vehicles and advanced transportation program.

"Improving fuel economy drives investment in new and added technology that goes into all of our cars and trucks," Lipman added. "Building, designing and installing that technology requires more labor hours and creates jobs. And that’s something we’ve seen on the ground in factories and manufacturing communities all across the United States."

When Trump took office in 2017, he indicated that he planned to take a fresh look at the car rules. And in August of this year, his administration proposed freezing fuel economy requirements at 2020 levels, rather than increasing their stringency each year as Obama had envisioned.

The administration acknowledged in its own proposal that freezing the fuel efficiency targets could result in a labor reduction equivalent to 60,000 jobs. That figure was quietly tucked into the 978-page document from EPA and NHTSA (Climatewire, Aug. 7).

"The agencies’ own analysis of the rollback predicted that it would result in [50,000]-60,000 fewer jobs from 2021 onward," Lipman said. "And that’s just spending that doesn’t happen on advanced technology. It doesn’t get into what happens if we fall behind on the next generation of investments."

Furthermore, it’s widely acknowledged that freezing the standards would lead to a lengthy legal battle among the Trump administration, California and the 13 other states that have set tougher tailpipe pollution rules than the federal government.

During litigation, automakers would be left with prolonged regulatory uncertainty, which could undermine their long-term planning.

"The proposal does put suppliers in a situation where it’s difficult to make long-term decisions," said Holmes of the motor equipment trade group.

Obama also made phasing out HFCs — a gas more potent than carbon dioxide at trapping heat in the atmosphere — a key part of his strategy for curbing global warming.

But two foreign HFC manufacturers sued EPA over the rule. And in an August 2017 majority opinion penned by Judge Brett Kavanaugh, the U.S. Court of Appeals for the District of Columbia Circuit sided with them, ruling that EPA had exceeded its authority under the Clean Air Act (Greenwire, Aug. 8, 2017).

The Trump administration later aligned itself with Kavanaugh, who would go on to become a Supreme Court justice, and the foreign companies (Greenwire, Aug. 29). It’s unclear whether EPA will issue a replacement rule. The agency has already taken steps to water down a separate HFC rule.

But two American companies, Honeywell International Inc. and Chemours Co., remain committed to phasing out HFCs. That’s because they’ve made significant investments in safer alternatives. For instance, Honeywell last year opened a $300 million Louisiana facility to manufacture an HFC replacement for use in cars.

Francis Dietz, vice president of public affairs at the Air-Conditioning, Heating and Refrigeration Institute (AHRI), said the Trump administration’s stance on HFCs has created regulatory uncertainty for his member companies.

"It created uncertainty for the industry where there was not uncertainty before," Dietz said.

Dietz also noted that the United States has yet to ratify the Kigali Amendment to the Montreal Protocol, which aimed for a global phase-down of HFCs. Finalized in October 2016, the amendment would avert enough emissions from air conditioning units and refrigerators to reduce warming by 0.5 degree Celsius by 2100.

Nearly 200 countries have said they’re on board with Kigali. But Trump has refused to send the amendment to the Senate for ratification.

A recent report from AHRI and the Alliance for Responsible Atmospheric Policy projected that U.S. ratification would create an additional 33,000 jobs.

"U.S. implementation of the Kigali Amendment is good for American jobs," the report states. "It will both strengthen America’s exports and weaken the market for imported products. Finally, it will enable U.S. technology to continue its world leadership role."

"What sticks in my mind is the figure that there would be 33,000 more manufacturing jobs in the ratification case than in the case where we spurn the treaty," said Natural Resources Defense Council attorney David Doniger, who has been working with industry to phase out HFCs.

"Basically, it’s an international market in chemicals and in equipment," Doniger said. "The United States currently has a lot of leadership in the technology and the patents. And we’re poised to expand on that if we’re part of [Kigali].

"But if we don’t participate," he said, "that investment and those jobs will end up being located elsewhere."