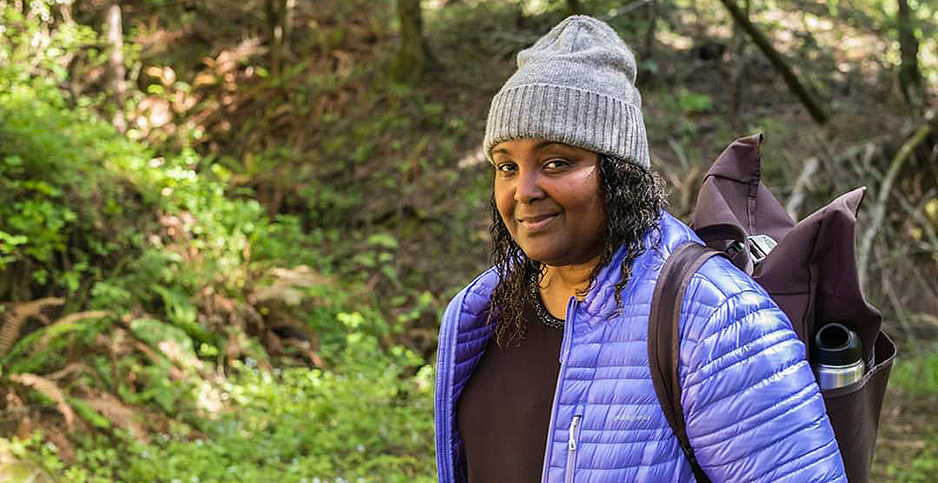 When Teresa Baker walked into the country’s largest outdoor gear trade show in June 2018, she did a double take.

"I had to stand there and gather myself because it’s a sea of whiteness," she recalled. "I thought, ‘Damn, this is bigger than I had imagined.’"

Baker was there to launch her Outdoor CEO Diversity Pledge, an effort to boost diversity and equity in the industry.

She forged ahead. Eventually, the Northern California-based gear maker Marmot signed the pledge. Others followed.

Now, as the killings of George Floyd and other Black Americans have highlighted racial injustice throughout the country, the outdoor industry is flocking to Baker and other outfits like Camber Outdoors and the Avarna Group to address diversity in the outdoors. Since Floyd’s killing, more than 150 companies and organizations have contacted Baker.

The moment has caught the industry, which typically prides itself on its liberal cred, in a difficult position.

Baker said some companies and groups have been taking the issue seriously for at least three years. But she and others uniformly acknowledged that the industry, with its 7 million employees, has been resistant to change.

"Our entire sector has been slow," said Phil Powers, the CEO of the American Alpine Club. "There is no question about that."

Multiple studies have found that visitors to public lands — including national parks and forests — are overwhelmingly white.

But there are indications that outdoor recreation is more diverse. An Outdoor Industry Association survey in 2018 found that people of color participate in outdoor activities at a much higher rate than visitation rates suggest.

Further, countless groups have sprouted up in recent years for people of color, including Brown Girls Climb, Black Girls Hike and Latino Outdoors.

To Powers, those groups demonstrate the industry’s strength and weakness. They show that a diverse group is engaging in their activities. But they also highlight that those climbers and others don’t feel welcome among the bigger traditional groups like his.

"Why are there so many affinity groups?" he said. "The reason is we are not doing our job. There is something that is not being handled or solved."

The Outdoor Industry Association, in a statement this month, acknowledged the "long history of systemic racism and injustice in our country and in the outdoors."

The association, which counts 1,300 members, including retailers, media and advocacy groups, vowed to issue a report on its "goals, action and progress" on its efforts at the January 2021 Outdoor + Snow Show in Denver.

But Executive Director Lise Aangeenbrug told E&E News she expects that agenda to move more quickly, particularly as the Outdoor Retailer Show prepares for its annual conference at the end of this month.

"Our primary role in the outdoor industry is to be a convener," Aangeenbrug said, noting that OIA is focused on how to educate its own board and executives about issues important to the "JEDI" organizations, using an acronym for justice, equity, diversity and inclusion.

She added that initial conversations must also focus on areas like equity in representation and marketing.

The industry has taken positive steps, but they may have been the easy ones. Now, it faces the challenges of deeper changes.

"It’s easier to get attention and start speaking on panels and holding the conversion than it is to, say, change the board of directors of a 60-year-old company," said Lindsey Davis, vice president of the Outdoor Recreation Roundtable, who previously ran an outdoor brand geared toward women.

"Right now, we are somewhat caught between those two extremes," Davis said.

‘I was shocked at the images I was seeing’

Baker, 55, grew up in Richmond, Calif., north of Oakland. Her father was a fisherman, and her family owned a horse ranch.

"Being in the outdoors was just part of my upbringing," Baker recalled.

She dedicated herself to diversity issues after a trip to Yosemite National Park in 2016.

"I spent a week there, and I did not see one other person that looked like me," she said.

She began with the National Park Service. The agency has racist roots and has long struggled with an overwhelmingly white workforce (Greenwire, June 25).

She said she found a receptive audience within the agency.

"They have their hand on what it takes to move this forward," she said. "I thought, ‘OK, who is next?’"

Baker turned her focus to gear makers and brands, pulling whatever she could find about the diversity of their boards and staff. And, just as importantly, she took a closer look at their marketing materials.

"I was shocked at the images I was seeing," she said. "I was not seeing equal representation. I wasn’t seeing people of color on social media and marketing campaigns."

She started reaching out to brands themselves. She got silence in response.

So Baker took to social media, launching a campaign calling out brands for their overwhelmingly white marketing.

In 2018, she and Chris Perkins, a joint-degree candidate at the Yale School of the Environment and Yale School of Management, launched the Outdoor CEO Diversity Pledge. The short document addresses hiring practices, marketing materials and consideration of people of color when companies choose their sponsored athletes and ambassadors.

When a company signs a pledge, it has to submit a plan to Baker. Then it must provide status updates three times per year.

Currently, 142 companies have signed on. Some of the larger companies include gear makers like Mammut and Eddie Bauer and shoe companies like Oboz and Brooks.

But there are some notable names missing from Baker’s roster, like Patagonia, the North Face and REI.

Baker said that shouldn’t be interpreted as a knock against them. Patagonia, which has taken some hits online for its diversity efforts, convened a retreat with Baker and has been in frequent contact with her.

"Nobody kicks ass around environmental protection like Patagonia. I am happy with what Patagonia is. Can they do better with DEI? Of course," she said, referring to diversity, equity and inclusion. "But so can a lot of others."

Patagonia, in a statement last month, noted that it has given more than $4 million to support communities often composed of people of color that face disproportionate pollution impacts. It also announced a $100,000 donation to the NAACP Legal Defense and Educational Fund.

"And we call on business to work with government and civil society to address racism. We know that we have work to do," the Ventura, Calif.-based gear maker said. "Tomorrow, and in the weeks to follow, we will intensify our efforts to ensure that voting, the most basic civil right we have, is safe for everyone."

The Outdoor Retailer Show is normally a massive event, and in recent years, it has waded more deeply into advocacy.

In 2018, the trade show moved to Denver following a split with Utah Gov. Gary Herbert (R) over public lands policy.

The industry has also pushed harder for access to parks and the outdoors, particularly for youth. A recent analysis by the nonprofit Trust for Public Lands found that 11 million Americans don’t have a park within a 10-minute walk from their homes, a problem more likely to affect communities of color and one that has taken on particular significance during the COVID-19 pandemic.

"The truth of the matter is not everyone has equal access to the outdoors," said the Outdoor Recreation Roundtable’s Davis.

The industry cheered the recent passage of the "Great American Outdoors Act," S. 3422, which permanently funded and reauthorized the Land and Water Conservation Fund at $900 million annually. Significant chunks of that money are likely to flow to state and local parks (Greenwire, June 17).

Because of the pandemic, this year’s Outdoor Retailer Show will take place virtually (Greenwire, April 3).

Nonetheless, Aangeenbrug said it will maintain some of its typical schedule, including daily breakfast sessions with keynote speakers. She said the opening session will focus on "Systemic change: What might that look like in the outdoor industry?"

That event will feature Greening Youth Foundation CEO Angelou Ezeilo, the founder of the Atlanta-based environmental nonprofit that aims to connect children with the outdoors and "green careers."

"She’s going to talk about the work that she’s done over the last 20-plus years and why it should be a wake-up call for businesses, activists, educators and policymakers, to recognize the work of grassroots advocates from diverse communities," Aangeenbrug said.

Focusing on the future

Some outdoor organizations seem to have gotten the wake-up call earlier than others. Powers’ American Alpine Club has won praise from some activists for taking these issues seriously. Powers is also leaving the group later this summer, and the new CEO will be Mitsu Iwasaki, an Asian American.

Peak Design, a San Francisco-based company that makes camera bags and equipment, is Baker’s first premium partner. Peter Dering, its CEO, said diversity has been on his mind since the company launched in 2013.

Back then, it was just five white males sitting around a table.

In 2018, the company codified an approach to diversity that includes a recruitment requirement that finalists for any position include two candidates who meet its DEI standards.

And he said the recent protests have made him — and the industry — take these issues more seriously.

"The fact that people are flooding to it now always seems to be distasteful to people," he said. "But the fact is this event has highlighted things in a way that a huge portion of the American public and the world is paying attention to it. So I would not fault anyone for flocking to it now."

For Baker, her motivation is the future. She has worked with the San Francisco-based Outbound Collective, a group that promotes outdoor activities and has its own #EveryoneOutside diversity initiative. The group helped launch Baker’s In Solidarity website, where her pledge is now housed.