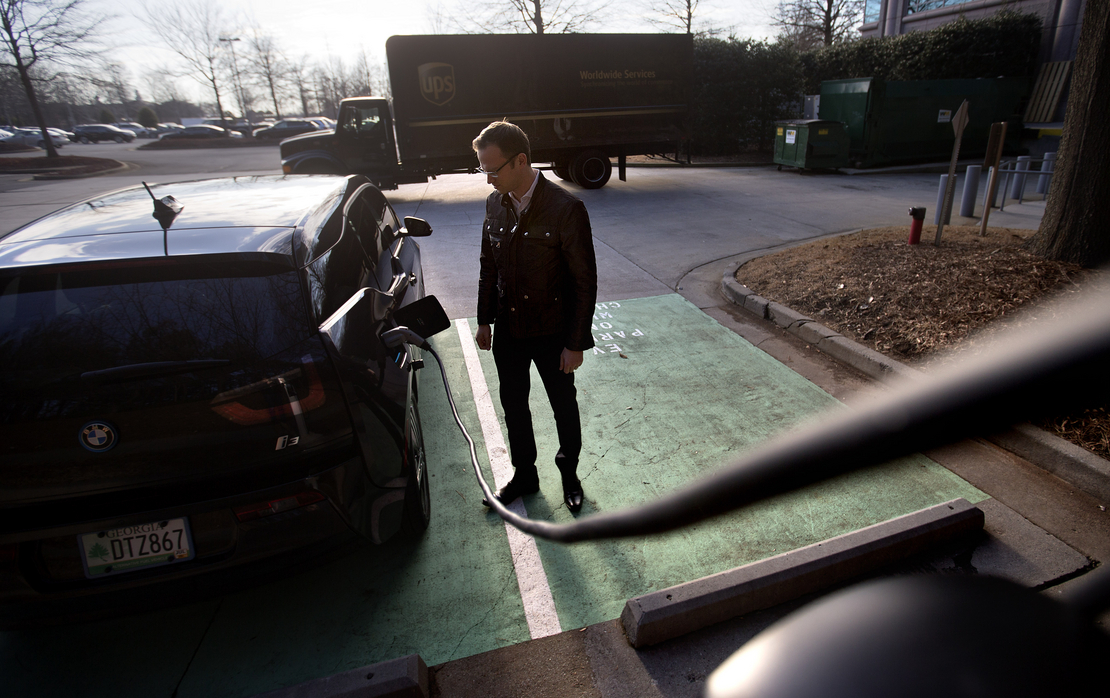 A motorist plugs in his electric vehicle in Alpharetta, Ga. Republican states are seeking federal infrastructure funding for the construction of EV chargers. David Goldman/AP Photo

Republican-led states are pushing ahead with electric vehicle manufacturing and infrastructure, even as their GOP governors and congressional representatives often have resisted the transition to zero-emission vehicles.

Federal funding is one reason. Economics is playing a big role, too.

Last year’s bipartisan infrastructure law included $7.5 billion for a coast-to-coast network of EV chargers and $7 billion to support the U.S. battery supply chain. One major beneficiary of the funding is the so-called battery belt — a swath of Republican-led states in the South and Midwest that has attracted the attention of EV industry manufacturers.

The Alliance for Automotive Innovation lists Texas, Oklahoma, Alabama, Mississippi, Georgia, North Carolina and Indiana as the country’s “new EV production” states in a recent research summary highlighting new investments in electric vehicles. Georgia, Kentucky and Tennessee are home to the greatest number of announced battery plants, according to the trade association.

“States are starting to sort of realize the economic development opportunities and job opportunities” associated with the EV industry, said Ben Prochazka, executive director of the Electrification Coalition.

At the same time, states are preparing to dole out contracts to private entities to build charging stations and offering incentives for companies to build gigafactories capable of producing enough batteries annually to power thousands of EVs.

And that’s often in spite of Republican opposition to climate-friendly policies.

Conservatives have pushed back on President Joe Biden’s climate efforts, often citing high costs, inflation and energy security as top concerns. Some Republicans have said the money going toward EV technology and infrastructure would be better used for shoring up the country’s energy independence — including by investing in fossil fuels — or for improving traditional infrastructure such as roads and bridges.

Few Republicans supported the bipartisan infrastructure law, also known as the Infrastructure Investment and Jobs Act, and not a single GOP member of Congress backed this year’s Inflation Reduction Act and its $369 billion in climate spending.

“No matter how well-meaning my Democratic colleagues may be, they are turning the economy upside down and increasing taxes all in the name of climate change,” Sen. Lindsey Graham (R-S.C.), said in a statement after the Senate passed the Inflation Reduction Act in August.

In spite of that, Prochazka said it’s important to watch what’s happening in the states themselves.

“We’re seeing a lot of industry that has been built up in those states. Maybe their senator didn’t vote to support IIJA or IRA, but we’re very quickly seeing the recognition that this is happening,” he said. “And while there might be some jockeying around the rhetoric, at the end of the day, this is the path forward.”

And advocates say climate-related investments in Republican-leaning states could stir up support among conservatives for clean energy policies.

Those states can be ideal locations for manufacturers looking to set up new facilities because of their right-to-work laws, their proximity to existing auto manufacturing plants and enticing incentives they can offer.

Take South Carolina. It is set to receive nearly $70 million in infrastructure funds over the next five years to place more than a dozen new charging stations along its highways. All six of South Carolina’s Republican House members voted against the infrastructure law.

“As the [automotive] industry continues to move toward electric vehicles, South Carolina will move along with it — working to ensure that our state will continue to be seen as the ideal place for manufacturers and suppliers to do business,” McMaster wrote in a Twitter post.