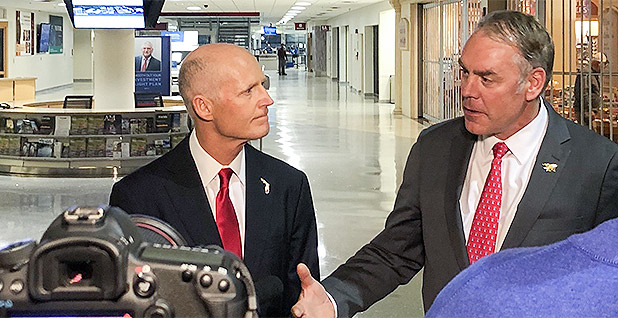 Florida Gov. Rick Scott (R) and Interior Secretary Ryan Zinke spoke in Tallahassee, Fla., earlier this month ahead of Zinke’s announcement that waters off the coast of Florida would be off-limits to drilling. @SecretaryZinke/Twitter

Waters off Florida’s coast are still under consideration for potential offshore drilling despite Interior Secretary Ryan Zinke’s tweet last week saying the state was off the table, a top department official testified this morning before a House Natural Resources subcommittee.

"They are still part of the analysis until the secretary gives us an official decision otherwise," Walter Cruickshank, acting director of the Bureau of Ocean Energy Management, said in response to Florida Democratic Rep. Darren Soto.

The lawmaker had asked whether Florida’s shores are "still in jeopardy" until the department makes an official decision on its five-year proposed plan to open more than 90 percent of the outer continental shelf to oil and gas drilling.

There is a current drilling moratorium in the eastern Gulf of Mexico off the Florida coast until 2022; Interior’s draft plan includes that area for potential leases after the moratorium is lifted. Zinke tweeted Jan. 9 that he was "taking #Florida off the table for offshore oil and gas" and attached a statement saying, "I am removing Florida from consideration for any new oil and gas platforms." That ignited a firestorm of criticism from many other elected officials in coastal states who want to opt out of leasing in the 2019-24 plan.

While the stated purpose of this morning’s Energy and Mineral Resources Subcommittee hearing was on the value of seismic research in assessing offshore drilling potential, Democrats used the opportunity to press for answers on Zinke’s comment that Florida is "off the table" with respect to the proposed energy development plan.

"You are not giving me a single reason why Florida is more unique than California, or Virginia, or South Carolina or other coastal states," Rep. Jared Huffman (D-Calif.) pressed.

The BOEM official told lawmakers that Florida along with the other coastal states included in the draft plan will undergo the same analysis as outlined by the Outer Continental Shelf Lands Act.

"All of that analysis and all the public comment will be made available to the secretary, so his decisions will be reflected in the next stage," Cruickshank said.

There are eight criteria under the law that the department will assess, he said, ranging from resource potential in the study areas to environmental impacts. "The second of the three proposals [required] under the act will be published later this year," Cruickshank said.

"As you can appreciate, many Floridians now believe that we are off the table, that there’s going to be no offshore drilling because of that [Zinke] statement," Soto said to the BOEM official. "And that’s not true."

Cruickshank replied, "The secretary’s statement is what it is; I’m in no position to interpret it any further. I will note that Congress has treated Florida differently than other areas with respect to the OCS, at least with respect to the west coast of Florida, and the congressional moratorium."

After Cruickshank’s comments, Natural Resources ranking member Raúl Grijalva (D-Ariz.) released this statement: "Instead of carefully following laws and regulations, this administration writes policy on a napkin, announces it on social media and calls it a day. … Our nation’s oceans and coastlines are being managed by an out-of-control administration with incompetent top leadership. Secretary Zinke’s tweet either represents official policy, in which case he’ll lose in court, or it doesn’t, in which case he shouldn’t have announced it in the first place."

Cruickshank said Zinke so far has talked with eight governors about the plan and will meet with others during the decisionmaking process. "Those conversations are important to the secretary and will be useful to him as he makes decisions going forward," he said.

Interior is now holding public hearings across the country on the draft plan.

Zinke on Jan. 4 unveiled his proposal for 47 lease sales in different parts of the outer continental shelf from 2019 to 2024 — the most ever for a five-year planning period.

He said at the time that he was open to tweaking the proposal. "Just like with mining, not all areas are appropriate for offshore drilling, and we will take that into consideration in the coming weeks," he said.

The 47 potential lease sales, according to the plan, would include 19 off the coast of Alaska, seven in the Pacific region, 12 in the Gulf of Mexico and nine in the Atlantic region.

The brouhaha over Zinke’s apparent exemption of Florida from the department’s offshore drilling plan is affecting Interior nominations on Capitol Hill.

Sen. Bill Nelson (D-Fla.) earlier this week placed a hold on three of President Trump’s key Interior Department nominees: Susan Combs, Trump’s choice for assistant secretary for policy, management and budget; Ryan Nelson, nominated to be solicitor; and Steven Gardner, the administration’s pick to be director of the Office of Surface Mining Reclamation and Enforcement.

Nelson wants details from the department on what the secretary meant when he said Florida drilling is "off the table," including whether that means an extension of the current moratorium in the eastern Gulf of Mexico beyond the current statutory limit of 2022.

The senator also wants to know whether waters off Florida’s Atlantic coast are included and whether seismic testing for oil and gas would be allowed.

Nelson, who sent a letter to Zinke on Jan. 10 about it, told reporters yesterday that he hasn’t heard from Zinke yet.

Asked how long he will keep the hold on the nominees, Nelson told reporters: "Until they come out by showing that there is no drilling off of Florida. They just put out the maps. Did you see the maps? The maps have the drilling on there."

The Florida Democrat said maps shown at the first public meeting this week still showed waters off the Florida coast included in the plan, despite Zinke’s promise.

Nelson said today in a statement to E&E News that Cruickshank’s comments during the hearing "confirms what we all suspected: there is no deal to protect Florida from drilling. What we saw last week was just political theater, and the people of Florida should be outraged."

Meanwhile, on the other side of the Capitol today, House Natural Resources Chairman Rob Bishop (R-Utah) is having the first in a series of discussions with members of the Florida congressional delegation on offshore drilling in the eastern Gulf of Mexico.

"We are going to be talking about what kind of options they actually have, what kinds of areas are there. It’s going to be the initial phase of talking to them," Bishop told reporters yesterday, characterizing today’s meeting as "very preliminary." The Utah lawmaker wasn’t sure which lawmakers would show up but mentioned Florida Republican Reps. Francis Rooney, Matt Gaetz and Daniel Webster as possibilities.

Rooney and Gaetz want to keep the moratorium on offshore drilling in the eastern Gulf in place (E&E Daily, Jan. 10).

Other lawmakers this week have continued to hammer Zinke about taking into account local opposition in their states to offshore drilling.

Thirty-six members of the California congressional delegation, including Huffman and Democratic Reps. Ted Lieu and Alan Lowenthal, sent Zinke a letter opposing drilling off their state and questioning the Florida exemption.

Virginia Democratic Sens. Mark Warner and Tim Kaine yesterday sent another letter to Zinke asking him to add public meetings on the issue in Virginia Beach and on the state’s Eastern Shore "to give local residents the opportunity to share their opinions on the Trump administration’s offshore drilling proposal."