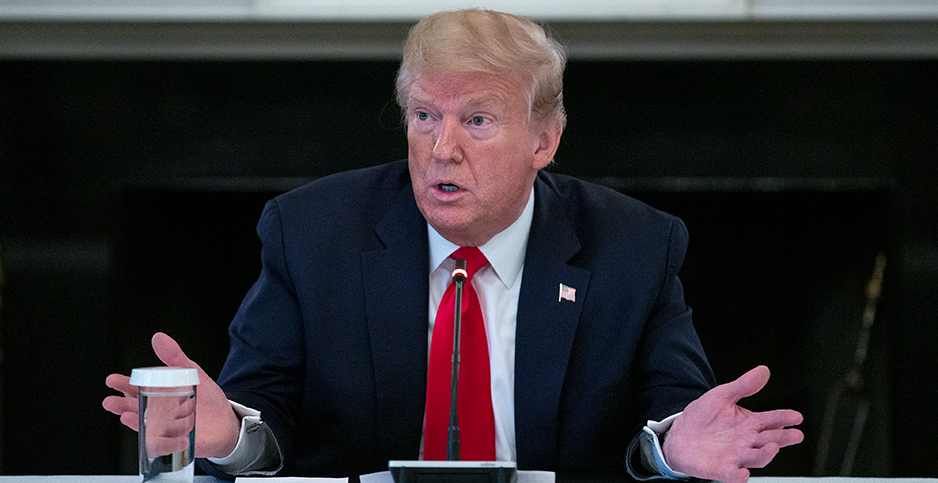 President Trump spoke during a roundtable event with industry executives regarding a plan for "Opening Up America Again" in the White House yesterday. Stefani Reynolds/CNP/POLARIS/Newscom

The Trump administration is looking at offering two lines of credit to help the beleaguered oil and gas industry as it reels from historically low prices sparked by the global coronavirus pandemic.

Energy Secretary Dan Brouillette outlined the plan in a call Tuesday with the North Dakota Petroleum Council (NDPC), telling producers that the administration is considering lending facilities with the Treasury Department and the Federal Reserve for loans to "help the industry through this pandemic."

No final decisions have been made, but Brouillette said he hopes for a launch "within a day or two," and President Trump said yesterday said he expects assistance to the industry "shortly." The loans would possibly require the government to take partial ownership of companies that seek a loan — as it did when it bailed out U.S. automakers in 2008 — a complication that some oil companies may not want.

"We’re not going to let anything happen to them," Trump said during a White House meeting. "We’re working on that very hard, protecting energy and energy independence."

Trump pledged that the industry was "one of the top of the list" for government assistance.

"Energy has really helped me turn this country into the economic power that it’s been, and we’re not going to let that go," he said.

Congressional Democrats have rebuffed efforts to assist the sector, and Trump suggested the administration’s efforts will be on behalf of smaller and medium-sized companies.

"The big ones are very strong," he said. "They’ve been very strong over the years, and I think that they’re not going to have the problem."

The administration has not offered similar assurances of aid to the renewables industry, and Trump suggested it was not ready to be a substitute.

The details of the loan programs come just over a week after Trump directed Brouillette and Treasury Secretary Steven Mnuchin to find a financial lifeline for the oil sector, tweeting the day after oil traded at negative prices for the first time ever that his administration would "never let the great U.S. Oil and Gas Industry down" (Energywire, April 22).

"We’re in touch with lots of people around the world, and the president is determined that we protect the national security interest and the jobs," Mnuchin said.

Brouillette, who said he has been talking with Mnuchin almost daily, said they had narrowed down the aid options to "what we feel are the most acute needs."

Not every company will qualify, Brouillette said, noting that the administration has narrowed the list of eligible companies to weed out larger companies that have access to private lending.

"There are some in the industry who are more needy, or more in need of these types of resources than others," Brouillette said. "That’s a polite way to say that there’s a bunch of big players that don’t need access to government capital, because they have access to other resources."

He said the smaller players are likely to include most of those that do business in North Dakota.

"Believe me, everybody in North Dakota is going to benefit," he said. "What we’ve done is we’ve taken off the bigger players."

NDPC President Ron Ness said access to capital could provide a "road to recovery" for some in the industry.

"Getting the industry through, just like we’re getting small business through this period of time, is essential," Ness said in an interview. "It’s precisely what’s needed."

Exxon, Chevron among companies to store oil in SPR

While pledging to help the smaller operators, the Department of Energy is allowing some of the biggest energy companies in the country to store excess oil in the nation’s Strategic Petroleum Reserve, according to sources yesterday.

The companies did not respond to calls and emails seeking comment late yesterday.

Earlier this month, DOE announced it had entered negotiations with nine companies to store oil in the reserve, but did not name them (Greenwire, April 14).

Oil associations, meanwhile, have already asked the Federal Reserve for flexibility under a lending program created earlier this month to assist small and medium-size businesses affected by the pandemic.

Brouillette said he’d lend his personal and his department’s support to both programs, "because I think they’re both desperately needed."

He told them North Dakota is not the only area affected by the glut in oil.

Environmental groups last week assailed the effort to extend loans, saying it would lead to a "full-fledged oil industry bailout."

Brouillette said he’s also asked Mnuchin to work with the Office of the Comptroller of the Currency to ensure that regulators do not impose "undue" pressure on smaller, regional banks to call in oil and gas industry loans.

"Now is not the time to be asking the borrowers in the energy industry for additional equity, with prices being what they are," he said.

Brouillette said he expects a quick turnaround for the industry once the country opens back up.

"It’s going to come back in a very strong way, and it’s coming back very soon," Brouillette said.

The talk of government assistance came as the price of West Texas Intermediate crude rose by about 25% to a little more than $15 a barrel, after Powell pledged to keep interest rates low and use the "full range of economic tools available" to help the economy recover, the Associated Press reported. Despite the sharp jump, oil is still selling for about a fourth of its price at the beginning of the year.

"We will use our powers forcefully, proactively and aggressively until we’re confident that we are solidly on the road to recovery," Powell said.