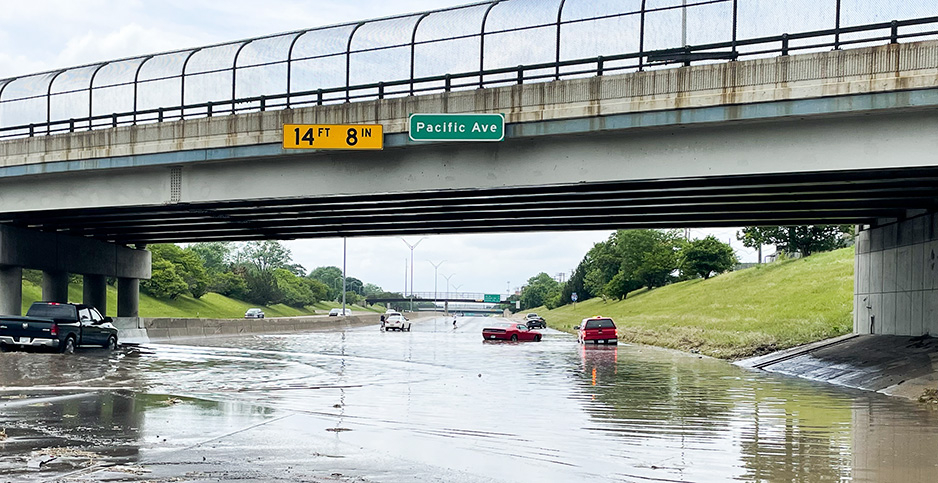 Many cars were abandoned at this Interstate 96 overpass of Pacific Avenue, causing the freeway to become impassible where the water was over 2 feet deep due to the torrential rains in Detroit on Saturday. Steven King/Icon Sportswire 258/Newscom

As much of the nation’s attention stays laser-focused on a historic drought gripping the West, a 500-year flood slammed the city of Detroit, swamping homes, turning highways into rivers and prompting Michigan Gov. Gretchen Whitmer to declare a state of emergency.

The flooding also underscores how global warming is presenting a new set of risks and challenges to the Midwest that will require a new approach to managing water.

City officials at a press conference yesterday said Detroit and surrounding parts of Wayne County were hit with more than 6 inches of rain within five hours in some areas, setting a record and shining a bright light on the threat of climate change.

Detroit Mayor Michael Duggan said he’s confident they can show the Biden administration that the floods amount to an "event of historic proportion" that overwhelmed the regional wastewater system and secure funding through the Federal Emergency Management Agency.

Southeast Michigan, Duggan said, has never seen such a large amount of rain in such a short period of time, noting that the average rainfall for the entire month of June is usually a little under 3 inches — and the region received more than 6 inches in just one day. Wayne County’s Garden City and Grosse Pointe registered 6.6 and 6.5 inches, respectively, according to a storm tracker through Iowa State University.

"We’ve never seen anything like it," he said. "We got two months of rain in just one day, and most of it came down in five hours. The water couldn’t even get down the storm drains onto the streets; the pipes were full."

"Nobody designed systems to handle two months of rain in one day," Duggan continued.

The amount of rain that fell — a total of 5.77 inches registered at Detroit City Airport on Saturday — surpassed a record set in 2014 of 4.75 inches when President Obama declared a major disaster, Duggan said. The city is already facing almost 3,000 calls from homes with flooded basements.

The flooding prompted the Michigan State Police for metro Detroit over the weekend to warn against swimming in floodwaters after posting photos on Twitter of people wading into a flooded underpass.

"Finally in the things I would never thought I would have to say: Do not go into the water. This water has debris, sharp metal, submerged cars, gasoline and oil floating in it. There is also a good chance that there is sewage also in the water. In other words it’s gross!" the tweet from the Michigan State Police said.

While Detroit’s stormwater system was built over the last century to accommodate 2 million people and should be sufficient for the city’s dwindled population of 700,000, Duggan said warming is presenting unexpected challenges.

Duggan said cities across the West facing wildfires are having to rebuild with climate change in mind, as are those across the Southeast struggling with hurricanes. In the Midwest, the "biggest risk" appears to be "these huge rain events," and that will require a new approach to managing water.

Gary Brown, director of Detroit Water and Sewerage Department, said the flooding events weren’t due to maintenance problems but instead were the result of a "global warming issue that caused a capacity issue that has to be fixed."

Detroit, he said, has more than 3,000 miles of sewer lines and 2,700 miles of water lines that were built a century ago. He noted that the city has added $1.5 billion in retention basins over the years and other construction projects to prevent flooding. The city’s nine retention basins, Brown said, can store about 170 million gallons of stormwater, but more investments are needed. He said he is hopeful that an infrastructure package taking shape on Capitol Hill will offer relief.

Brown said DWSD is starting a construction project to store 95 million gallons and that the Great Lakes Water Authority is slated to invest $750 million in water system improvements over the next five years.

At the event, Whitmer, a Democrat, also doubled down on pushing for infrastructure funding and said she believes the flooding event shows why that money is needed.

"This is the confluence of underinvestment and climate change," she said.