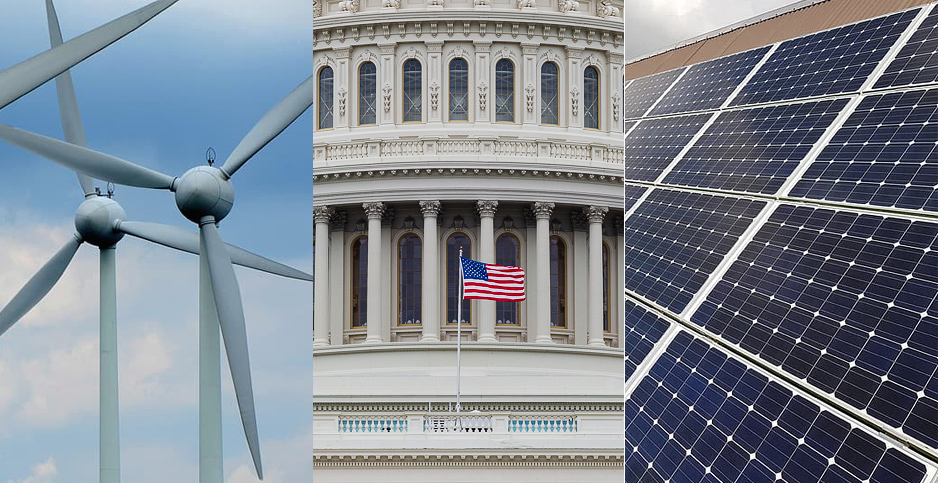 A report on clean energy job losses is prompting advocates and many lawmakers to push for tax incentives and other aid. Pikrepo (wind and solar); Francis Chung/E&E News (dome)

Clean energy advocates are stepping up pressure for COVID-19 relief, citing dismal new unemployment numbers showing nearly 600,000 lost jobs within the sector since the start of the pandemic.

But a top House Republican signaled yesterday that the political headwinds remain strong against legislating on clean energy tax incentives.

Of that number, 413,000 jobs were lost within the efficiency sector, with renewables coming in second at more than 95,000 jobs. More than 46,000 jobs were lost in the clean vehicles sector. Those numbers are likely to increase, the analysis states, citing ongoing stay-at-home orders and the closure of nonessential businesses due to the pandemic.

The Alliance to Save Energy, whose members saw major job losses as construction declined, called on Congress to act.

"These are devastating numbers, and we need to start focusing here in Washington on what to do about it," Ben Evans, the alliance’s vice president of public affairs, said in a statement. "This is about blue-collar workers, most of them working for small businesses, who have suddenly lost their livelihood.

ACORE President and CEO Gregory Wetstone said the April losses were worse than had been feared, and called on Congress to make changes to existing tax breaks to make them more accessible in the stalled economy.

"The COVID-19 pandemic is delivering an unprecedented blow to renewable industry workers, whose job losses more than tripled over the past month," Wetstone said in a statement.

"Congress can help get these Americans back to work, and help get our economy back on track, with commonsense relief for time-sensitive tax credit deadlines and temporary refundability for renewable tax credits that are increasingly difficult to monetize."

Clean energy advocates have struggled to get their priorities into the four COVID-19 stimulus packages enacted so far, with a worsening public health and economic crisis consuming lawmakers’ attention.

House Speaker Nancy Pelosi (D-Calif.) has called for a massive green-infrastructure package, but that push also keeps being relegated to the back burner (E&E Daily, May 13).

While the House is scheduled to vote tomorrow on a $3 trillion stimulus package, it is viewed as a legislative marker for future talks and largely sidesteps energy and environmental policies sought by advocates (see related story).

Sen. Ed Markey (D-Mass.), the leading Senate advocate for the Green New Deal, took to Twitter yesterday insisting that the clean energy sector be covered in the next aid package.

"The next #COVID19 package needs to include support for the clean energy sector, which has been devastated by the pandemic. Our response can’t just be a reaction, it has to be an investment in the technologies & workers who will power this country’s future," he tweeted.

Sierra Club Legislative Director Melinda Pierce called for leadership in Congress to help clean sources and efficiency. She called the House package a start but said more needs to be done.

"The $3T bill just released by the House contains many important priorities for the country, and though it includes a lengthy tax section, it unfortunately leaves out COVID-19 related assistance that could save clean energy jobs," she said in a statement. "We cannot afford to let the clean energy industry backslide."

Rep. Kevin Brady (R-Texas), the ranking member on the Ways and Means Committee, told reporters yesterday he would oppose extending tax breaks for wind and solar that are phasing out of the code under a 2015 tax deal he helped negotiate.

That deal, which also ended a decades-old ban on crude oil exports, created a "glide path" for those renewables, said Brady. Speaking before the new jobs analysis was released, he said he was unaware of the plight of clean energy sectors.

However, Brady did not call for additional stimulus for the oil and gas industry, either, saying only that energy companies should qualify for existing loan programs created in response to the pandemic.

"I think the key right now is lending to the energy companies to protect their workers," Brady said, dismissing calls from left-leaning Democrats and environmentalists to exclude fossil fuel interests from stimulus lending. "I think that’s wrong."