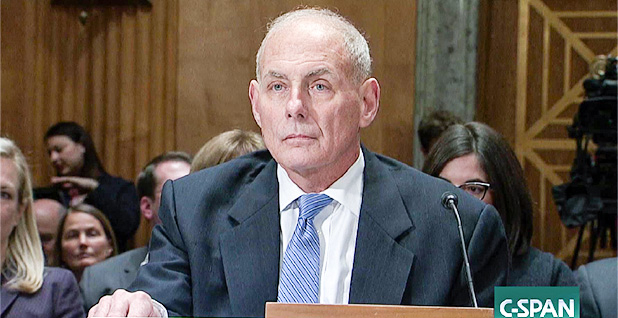 John Kelly, secretary-designate of the Homeland Security Department, gave senators a glimpse of his reputation as a Marine general for "speaking truth to power" in several responses at his confirmation hearing yesterday on the cybersecurity and border issues facing the nation.

Asked by Sen. Claire McCaskill (D-Mo.) whether he supported the conclusions of the Obama administration’s intelligence chiefs about Russian intervention in the U.S. election, Kelly said yes, "with high confidence."

Kelly’s future commander-in-chief, President-elect Donald Trump, had dismissed the intelligence findings until last week, when he received a classified briefing on the report by a team led by Director of National Intelligence James Clapper, who like Kelly is a highly decorated retired general.

Kelly, appearing before the Senate Committee on Homeland Security and Governmental Affairs, was not asked about the latest development in the Russian hacking investigations, the report by CNN and other news organizations that U.S. authorities are investigating unsubstantiated reports of compromising information on Trump that allegedly originated in Russia.

President Obama and Trump were briefed by U.S. intelligence leaders about the classified information last week, according to CNN and other reports. Trump responded on Twitter yesterday, "FAKE NEWS — A TOTAL POLITICAL WITCH HUNT!"

In his appearance, Kelly also expressed doubts about the effectiveness of a border wall with Mexico, a top campaign commitment by Trump, and of government efforts to single out Muslim Americans for surveillance, another proposal from the GOP candidate.

One committee member after another lauded Kelly’s long military service and commitment, with one senator calling the hearing a "lovefest."

Following the hearing, McCaskill joined committee Chairman Ron Johnson (R-Wis.) in predicting Kelly’s rapid confirmation. "I thought Gen. Kelly gave great answers. He didn’t do what a lot of nominees do that we’ve seen over the years. He didn’t sidestep," she said. "I thought he was very straightforward."

"I’m comforted. I think he will be a moderating influence on President Trump," McCaskill told reporters at the hearing’s conclusion.

Kelly’s diplomatic skills have been praised for his coalition-building successes during the Iraq War. He also attracted praise for his final military assignment as commander of the U.S. Southern Command, where he worked closely with Central American leaders on drug interdiction. He retired from that post a year ago.

He was diplomatically careful not to get ahead of the Trump administration when questioned about the future of President Obama’s Deferred Action for Childhood Arrivals (DACA) policy. The policy has allowed some undocumented younger immigrants brought to the United States as minors to remain in the country if they do not have a serious criminal record and have served honorably in the U.S. military or achieved educational goals.

Kelly said Trump team officials are reviewing that policy and that he would bring an open mind to the issue if confirmed. The DACA young people would not be on his priority list for deportation, he added.

Kelly was not pressed by committee members for specifics about how he would tackle DHS’s cybersecurity responsibilities, which the department shares with the Defense Department, the FBI, intelligence services and agencies involved with particular sectors, such as the Energy Department’s role in securing the power grid and the Treasury Department’s oversight of financial services.

"His qualifications are just impeccable," Johnson said following the hearing. "The range of responsibilities, the range of issues, the range of threats that Secretary Kelly would have to deal with will take some time to get into position and start to address in any kind of detail."

Johnson noted that Kelly had submitted ethics and financial disclosure statements to the committee before yesterday’s hearing, adding that he hoped Kelly could be confirmed on or close to the Jan. 20 inauguration. There are no roadblocks in sight, Johnson added.

Kelly was asked by Sen. John McCain (R-Ariz.) about the effectiveness of a wall on the U.S.-Mexican border, a barrier to illegal immigration and drugs that Trump has committed to erect.

Kelly said a physical barrier by itself is not the answer. "It has to be really a layered defense," he said. By that, he said, he meant U.S. border forces should get more leeway to do their jobs within the law, but also the use of more sensors and reconnaissance drones, and more support for Central American companies in strengthening not only their law enforcement but their societies and economies.

Fundamentally, he added, the drug part of the border issue requires a broad campaign to reduce drug use and rehabilitate drug users in the United States, who provide such a lucrative market for drug cartels. "The profits are so outrageous," he said. "That’s why I believe it’s all about demand."

His responses on the nation’s cybersecurity threats were general. "The best thing we can do, obviously, is to get outreach to everybody, whether they are power plants or other commercial interests. The problem you’ve discussed is constant, it’s relentless," Kelly said.

Outreach can offer existing cyberdefenses, he continued, but added, "The threat changes so rapidly that we have to find a way, I think, to keep up with it."