Did Trump create a new talking point for skeptics? 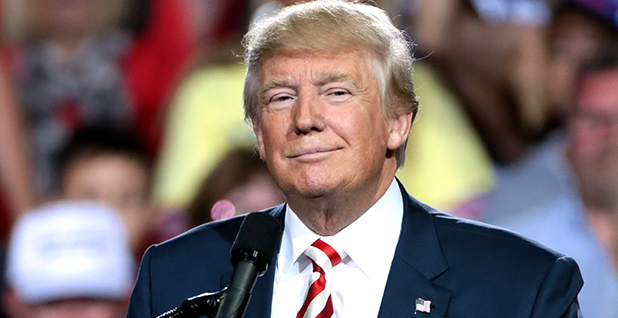 President Trump found a new way to express his suspicions about climate change. The question is whether it will become a talking point.

Those who doubt mainstream climate science have for a long time downplayed the role of human-related emissions by saying that Earth’s climate system has always fluctuated naturally. Trump flipped that around. He looked to the future instead of the past by suggesting that today’s higher temperatures could decrease on their own — or "change back."

As scientists grappled with this new presentation of skepticism, others began repeating it. Trump made his remarks Sunday on CBS’s "60 Minutes."

Marc Morano, who runs the website Climate Depot, which rejects climate science, wrote that it was "scientifically, politically and economically accurate."

Trump made his comments a week after the Intergovernmental Panel on Climate Change released a major report showing that humans have dramatically altered the climate. Then, yesterday, Trump toured the splintered Florida Panhandle and Georgia pecan farms to survey damage from Hurricane Michael. He sidestepped questions about climate change along the way.

In today’s supercharged political sphere, the accuracy of Trump’s words is almost irrelevant in terms of political discourse, observers say. The president has a knack for boiling big ideas into manageable phrases. And they can be repeated, even if they’re misleading.

"Unfortunately, when the president says something, or when any leader says something, it has the potential to spark it being a new talking point," said Susan Joy Hassol, director of the science outreach nonprofit group Climate Communication and a senior science writer on the National Climate Assessment.

Hassol, who has worked in climate communications for three decades, said Trump’s claims are basically a variation of the most popular talking point for climate contrarians, the notion that the climate is always changing and therefore humans can’t do anything about it, like curb their use of fossil fuels.

On Sunday, Trump didn’t delve into the subtleties of climate science.

Others saw it as a new claim, including Marlo Lewis, a senior fellow at the Competitive Enterprise Institute. Lewis said Trump’s assertion that the climate would change back was a comment on the long-term effects of climate change, not something that will happen in the next few decades or even centuries. He said the president meant to say climate change was a "scam" in 2012, when Trump called it a "hoax." Trump repeated those claims before the 2016 presidential election.

"Trump can crystallize the big picture for the general public in a single punchline or phrase," Lewis wrote in an email. "A ‘hoax invented by the Chinese.’ It’s pretty clear from the context that ‘hoax’ means ‘scam.’ As in the Paris Agreement is a ‘bad deal’ for America."

Still, Trump’s followers have a history of picking up his falsehoods and turning them into a new argument or even policy goals. Take Trump’s false assertion that millions of illegal immigrants helped tip the popular vote toward Hillary Clinton in the 2016 election. He has never provided evidence to support that claim, and a voter fraud commission that was appointed to examine supposed illegal activity disbanded after failing to find a crime.

This summer, Trump claimed that California did not have adequate water to fight severe wildfires. The California Department of Forestry and Fire Protection immediately said that was not true and that environmental laws had no effect on firefighting. Nonetheless, Commerce Secretary Wilbur Ross ordered NOAA Fisheries to allow water use beyond the normal limits of the Endangered Species Act, and Interior Secretary Ryan Zinke blamed "radical environmentalists" and their forest conservation lawsuits on supposed water shortages.

Yesterday, less than a day after Trump made his comments, some conservative outlets were repeating his claims and attacking Lesley Stahl of "60 Minutes."

"The role of man [in climate change] has not been unveiled to a way in which the president accepts," said Brian Kilmeade, host of "Fox & Friends." He then accused Stahl of having "an agenda" for asking about climate science.

"She really believes in global warming, and that’s fine, and man’s role in climate change, and that’s OK," he said. "But I don’t think you should bring your point of view — she was trying to win over the president with her point of view."

Trump’s loyalists immediately picked up and repeated the false claim.

Although it is true that the Earth’s climate has always varied, as kindergarteners learn when they learn about the extinction of dinosaurs, climate scientists say the current rate of rapid warming is unprecedented.

The rise in warming corresponds to the increase in atmospheric carbon dioxide, scientists say.