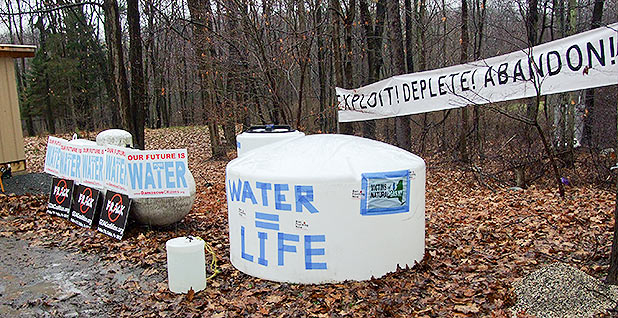 A yearslong battle over water contamination in the Marcellus Shale town of Dimock, Pa., has finally reached its end — in a confidential legal settlement.

In a short filing, the court noted that the case had been "amicably resolved by the parties." Lawyers are keeping the settlement details under wraps, but plaintiffs’ attorney Leslie Lewis noted that the Dimock families were "relieved" by the agreement.

"The settlement is final," Lewis said in an email. "I have no comment as to any specific terms of the settlement. After nearly a decade, the plaintiffs are happy and relieved to have these past litigated matters behind them."

A Cabot spokesman said only: "The case has been settled. The matter is now closed."

The settlement is a quiet end to a fiery conflict that spanned nearly a decade and resulted in a short-lived victory for the landowners last year.

Dimock-area families first raised concerns about fouled drinking water in 2008 and 2009. They blamed nearby oil and gas operations, and their complaints of flaming tap water gained nationwide attention after they were featured in the anti-fracking film "Gasland."

U.S. EPA in 2012 concluded that hydraulic fracturing fluid was not present in Dimock water, but state investigators linked contamination to poorly constructed gas wells that leaked methane, the main component of natural gas.

Dozens of residents took Cabot to court, and the case was eventually narrowed to two families’ arguments that negligent drilling activity by Cabot created a nuisance. After a three-week trial in Scranton, the families won a landmark victory, a $4.2 million jury verdict against Cabot (Energywire, March 11).

But the company quickly challenged the verdict, arguing that "undisputed" evidence shows that Dimock-area water problems pre-dated Cabot’s operations in the area. Chief Magistrate Judge Martin Carlson agreed, setting aside the verdict earlier this year after finding that evidence in the case did not support the jury’s conclusion.

He also found that Lewis, the families’ lawyer, had made "regrettable missteps" during the trial by raising issues that had been deemed off-limits in the case and were prejudicial to Cabot. Lewis has disputed Carlson’s account (Energywire, April 3).

Carlson ordered a new trial and required the two sides to first engage in settlement discussions.