Disappointment and hope in Perry’s Texas 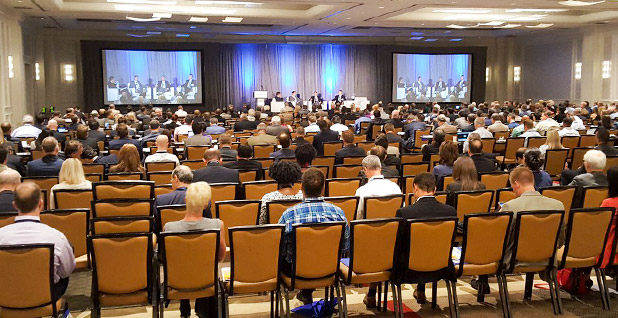 AUSTIN, Texas — Count the power sector in Rick Perry’s home state among those unimpressed with the Energy secretary’s proposal to redefine competitive markets.

Prominent voices in Texas electricity unloaded yesterday on the Department of Energy’s recent directive to the Federal Energy Regulatory Commission that may serve as a lifeline to struggling coal and nuclear plants. Yet leaders here also tended to hold out hope that DOE’s push will lead to U.S. power market reforms they see as more compatible with competition.

Recognition of a disconnect ran through the Gulf Coast Power Association’s fall conference as Texans mentally contrasted a Perry who carried a free-market mantra as governor with a Perry whose name is attached to a federal plan that could disrupt organized electric markets.

Perry’s letter to FERC seeking change has caused waves since its emergence last week (Energwire, Oct. 2). While Texas’ main power market is regulated primarily by the Public Utility Commission of Texas (PUC), the proposal from Perry remains jarring for those here pondering the national implications of DOE’s plan.

"It’s just profoundly disappointing that the man who presided and actively oversaw and protected the best competitive market in the country signed that letter," Pat Wood III, a former chairman of both FERC and the PUC, said in an interview.

CEO Robert Flexon of Dynegy Inc. said the proposal is counter to the competitive marketplace, even if his power company might see some benefits from the plan. "If you’re going to do that, just re-regulate," he said. "Just re-regulate everything."

"I think it is a dreadful policy proposal," said Alison Silverstein, a consultant who was involved in a recent grid study for DOE. She said the DOE plan "appears to have immense cost implications for the market, for reliability and for customers" without obvious benefits to those segments.

The approach promoted by DOE could benefit coal and nuclear plants because it talks of compensation for "fuel-secure" generation sources that have 90-day fuel supplies on-site. DOE discussed the idea of fully valuing the reliability and resiliency of on-site fuel.

The plan was a topic of interest yesterday morning as Flexon and Mauricio Gutierrez, CEO of NRG Energy Inc., were among those on a panel moderated by Wood.

The former FERC chairman began a discussion of the DOE proposal by referring to a "Christmas turd." He did say DOE had concerns about competitive markets not properly pricing attributes Perry deemed worth paying to have.

Later, Wood said it’s possible that FERC could use this as an opportunity to fix markets that need fixing. He wasn’t sure about a 60-day turnaround mentioned by DOE, but Wood said something could happen in less than six months.

In an interview, Wood described the DOE proposal as a "call to action" that would lead to an aggressive upgrade to power markets.

So Wood isn’t disappointed that Perry is seeking action, but he indicated this particular proposal besmirches Perry’s reputation after a 14-year run as governor that helped to foster a new approach to electricity. Competitive wholesale and retail power markets are in place in much of Texas despite price spikes, capacity market discussions and an expansion of the grid over the years.

"He took the baton, his team and all his appointees, and they ran with it and that’s why we have this great market today," Wood said.

Wood pointed out that Perry is now working under President Trump, who has made his sentiments about coal clear. But Wood seemed to favor a more neutral approach and said markets exist to serve customers better than an earlier system.

"The nation’s always solved stuff through ingenuity and technology, and I would not ever want to restrict any power solutions to designated companies or fuels or technologies," he said.

Flexon told the crowd that a subsidy war is alive and well, from wind to nuclear to possible additions from the DOE plan. The proposal involves "nothing more than just a new subsidy entering the space," Flexon said.

Although Dynegy is a fairly large coal-fueled generator, Flexon said he’s not supportive of the DOE plan because policy should be technology-neutral. But he said energy price formation needs to be improved.

"This is designed to counter the efficiency of the marketplace and to save assets that should be exiting the market," Flexon said.

Dynegy has been criticized for an effort in Illinois that would change pollution standards, possibly allowing the company to avoid some new pollution controls at coal-fueled plants (Energwire, Oct. 3). But Flexon defended the company’s stance in an interview, saying the proposal in that state is intended to aid efficiency and allow less pollution.

NRG’s Gutierrez said the grid in Texas showed reliability and resiliency in the aftermath of Hurricane Harvey. But he also called for price formation changes in energy markets while emphasizing to the crowd a need to be neutral in terms of fuel and technology.

"The concept of just and reasonable return for generation assets, we’re all for that," Gutierrez said, adding that it needs to be in the context of a competitive solution.

Silverstein also was here yesterday, saying in an interview that the DOE letter "will certainly force FERC into action to do something to protect competitive wholesale markets."

Yet she said "there is no way that plants subsidized to this degree are consistent with competitive markets, nor are they consistent with parity of treatment to other plants and other investments."

Silverstein added: "So I think FERC is going to have to do some scrambling to come up with an alternative, and they are now on a clock."

If she were FERC’s chairwoman, Silverstein said her response after 60 days would be declining to adopt the DOE proposal and moving in a different direction to accomplish certain goals.

Curt Morgan, CEO of Vistra Energy Corp., said during an interview he thought Perry had been challenged by the administration to come up with something that could support coal and nuclear. But Morgan said the plan has issues, from implementation to legal to protocol.

In the end, he said it could accelerate reforms from markets that want to move ahead with their own approaches.

"I think FERC’s going to have to do something," he said, suggesting "a collaborative effort" with system operators. Morgan said some changes also are possible in Texas’ main power market, but he suggested a deliberate approach.

John Berger, CEO of Sunnova Energy Corp., offered a perspective from a residential solar company. He said there’s a need for market restructuring and argued it’s not true that solar and batteries will move slowly.

But what about potential help for coal and nuclear from DOE’s plan?

"I’m not into picking winners and losers, even if he was to pick solar," Berger said of Perry during an interview.

So Berger might not agree on Perry’s exact approach, though he did agree on a focus on resiliency and potential changes in the power system around the country.

But Bill Peacock, a vice president of research at the Texas Public Policy Foundation, said the DOE proposal attempts to address a problem caused by renewable subsidies by turning to subsidies for coal and nuclear.

"We think the direct way to deal with this is just to eliminate renewable energy subsidies and the regulations that make coal" more expensive for generation, he said.

Peacock didn’t seem hopeful the DOE proposal would help to jump-start a debate that leads to positive reform.

"If this jump-starts anything, it’s likely to be more subsidies," he said.

Flexon said in an interview that the DOE proposal could stimulate a discussion around fixing other things in the marketplace in terms of the most efficient way to form prices. This could play out in markets such as one managed by PJM Interconnection, whose region runs from the Mid-Atlantic to parts of the Midwest.

"I really think it’ll get PJM and the other markets to really update energy price formation tariffs," Flexon said.

Yet Flexon suggested the DOE proposal could create a "death zone" for a generator with a system that’s partly regulated and partly competitive. In that situation, competitive parties could get crushed, he said.

The Dynegy CEO told the crowd that the investment community has lost confidence in the competitive market. That has affected companies such as Dynegy that aren’t traditional utilities.

"We can compete with anybody on price," Flexon said. "It’s just hard to compete on subsidies."