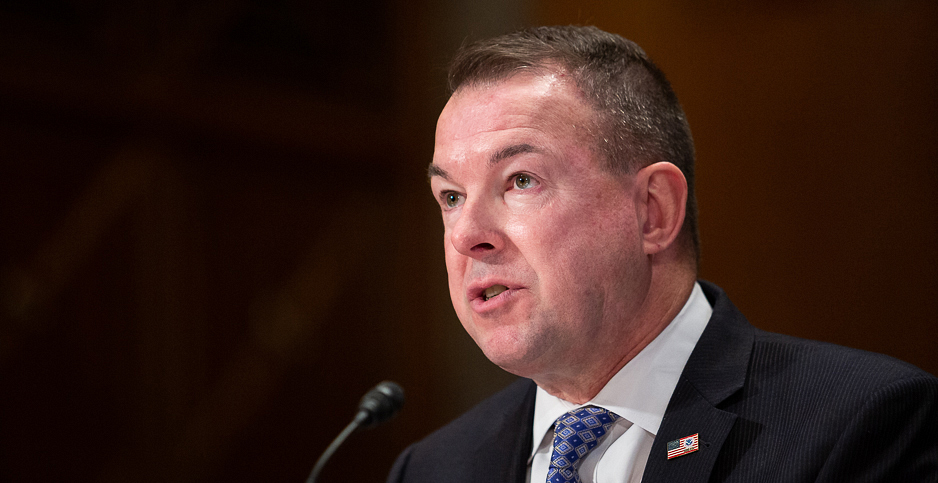 FEMA Administrator Peter Gaynor on Capitol Hill last year. The agency issued a detailed warning about the risks of pandemics before the novel coronavirus surfaced in China. Francis Chung/E&E News

The Federal Emergency Management Agency warned last year that a pandemic caused by a novel strain of influenza would cripple the country’s response capabilities by driving millions of people into overwhelmed hospitals.

The report, which was written before the new coronavirus first surfaced in China, offered these prescient predictions: The deluge of patients would create "a shortage of medical supplies, equipment, beds, and healthcare workers."

FEMA’s warning, issued in July, forecast with stunning accuracy the social, economic and personal devastation that the ongoing pandemic has caused.

The report, which has not been previously described, was drafted in collaboration with the White House Office of Science and Technology Policy and other federal organizations.

With detail about widespread "social distancing" and "the overcrowding of hospitals and medical centers," the federal government’s disaster agency provides perhaps the strongest contradiction of President Trump’s assertions that the scope of the current pandemic could not have been foreseen.

The report also undermines comments by FEMA Administrator Peter Gaynor, who has sought to deflect responsibility for the pandemic’s damage by saying the Department of Health and Human Services is responsible for public health. Gaynor was FEMA’s deputy administrator when the report was published.

FEMA did not respond to questions emailed by E&E News yesterday morning.

A key section of the 37-page report, which looks at various perils facing the nation, is a nine-sentence narrative under the headline "Pandemic Scenario." It describes a sequence of catastrophes that would unfold as a "new (novel) strain of influenza virus" spreads across the United States and infects 30% of the populace.

In the scenario, "conventional flu vaccines are ineffective against the current strain, and the CDC estimates that a new vaccine could be months away from mass production," the narrative predicts accurately, referring to the federal Centers for Disease Control and Prevention.

"Because of the pandemic, social distancing is in widespread effect. Utilities, police, fire, government, and other essential services are disrupted due to social distancing and employee absenteeism. Businesses close, resulting in a large-scale loss of services," the narrative continues.

And presaging the current lack of ventilators, respirators and COVID-19 test kits, the report says that in the pandemic scenario "there is a shortage of medical supplies, equipment, beds, and healthcare workers."

FEMA and federal health officials who control the nation’s stockpile of emergency medical equipment have faced criticism in recent days after governors and hospitals were unable to procure sufficient supplies.

Although FEMA’s report has received almost no public attention since the agency posted it in late July, the document was likely read and approved by every federal agency that deals with disaster and emergency scenarios, former FEMA Deputy Administrator Timothy Manning said in an interview.

"If this was published by FEMA, it went through concurrence and was cleared by all the relevant federal agencies," said Manning, who ran FEMA’s National Preparedness Directorate and is now a senior adviser at the Pacific Disaster Center, a research group.

The report, called the National Threat and Hazard Identification and Risk Assessment, identifies the "greatest threats and hazards" to the United States, according to the introduction.

The analysis also aims to determine what improvements are needed to prevent, mitigate and respond to potential catastrophes. The analysis covers every sector, including all levels of government, the private sector and nonprofit groups.

FEMA worked on the report with dozens of federal departments and agencies, including the White House Office of Science and Technology Policy, the FBI, HHS and the Defense Department.

In analyzing potential catastrophes, FEMA started with a list of 59 threats and hazards and narrowed it down to nine scenarios that would be most catastrophic, including a pandemic resulting from a novel strain of the influenza virus.

The other most devastating scenarios involve major hurricanes, earthquakes and "space weather" that knocks out power nationwide. Two of the catastrophic scenarios are omitted from the public version of the report because they are "too sensitive for inclusion."

The FEMA report was published months before other federal documents warned government leaders about the threat of novel virus strains.

A report by the White House Council of Economic Advisers, which estimated more than 500,000 deaths and economic devastation from an influenza pandemic, was written in September.

Another report, written in October, simulated a pandemic that migrates from China to the United States and infects 30% of U.S. residents. FEMA worked closely with HHS on the pandemic simulation, code-named "Crimson Contagion."

The reports have raised questions about whether the Trump administration acted quickly enough to slow the spread of the novel coronavirus in the United States and whether the federal government should have been more prepared for the outbreak.

The reports also undermine Trump’s statements that such a pandemic could not have been predicted.

"Nobody ever thought of numbers like this," Trump said at a White House briefing on March 18, when the CDC reported 10,442 COVID-19 infections in the United States.

On March 19, when the CDC reported 15,219 domestic infections, Trump said: "Nobody knew there would be a pandemic or epidemic of this proportion. Nobody has ever seen anything like this before."

"There hasn’t probably been enough time to work into the budget cycles things that start to address the shortfalls addressed in that analysis," Manning said. "I’m sure it generated the conversations, but it wasn’t enough time. That’s the reality of how this all works."

Although FEMA is the nation’s official disaster agency, Trump did not put FEMA in charge of the federal response to COVID-19 until March 13. HHS was coordinating the response until then.

On March 12, Gaynor, the FEMA administrator and a Trump appointee, told the House Transportation and Infrastructure Committee, "I have personally not had any conversations" with HHS.

Gaynor sidestepped questions about whether FEMA should have been involved sooner with the pandemic and whether the agency knew about the possible consequences of an outbreak involving a novel strain of the influenza virus.

"Is it really fair to say you had no warning about this?" ABC News’ Martha Raddatz asked Gaynor in a March 22 interview.

"The public health medical mission, statutory lies with HHS," Gaynor replied. "My mission, FEMA, prior to this, [was] national disasters and those catastrophic events that happen."

FEMA has come under increasing scrutiny as it has taken charge of distributing emergency medical supplies and personal protective equipment, known as PPE, to desperate states and hospitals.

On Tuesday, two senior House Democrats told Gaynor in a letter that "the agency’s opaque and evolving processes are clearly not meeting the needs that communities have right now for PPE and medical supplies." The letter was written by Homeland Security Chairman Bennie Thompson of Mississippi and House Oversight and Reform Chairwoman Carolyn Maloney of New York.

Lawmakers and governors are questioning the capacity of the Strategic National Stockpile, a repository of supplies that is distributed during public health emergencies.

Although the stockpile is controlled by HHS, FEMA is the primary customer, tapping it at least a dozen times since the stockpile was created in 1999, most recently when Hurricane Dorian hit the coast of the U.S. Southeast in August.

The stockpile is not designed to handle the demand for a 50-state pandemic such as COVID-19. FEMA spokeswoman Janet Montesi said in a recent statement that the agency’s "planning assumptions" for the pandemic acknowledged that the stockpile alone "could not fulfill all requirements at the State and tribal level."

New York Gov. Andrew Cuomo, a Democrat, expressed frustration yesterday with FEMA and said states are considering forming a consortium to buy emergency medical supplies so they don’t have to compete against each other.

"When I was in the federal government, FEMA effectively was the shipping clerk. They did the purchasing. They disseminated to the states. That’s the simplest system," said Cuomo, who was secretary of the Department of Housing and Urban Development during President Clinton’s second term.