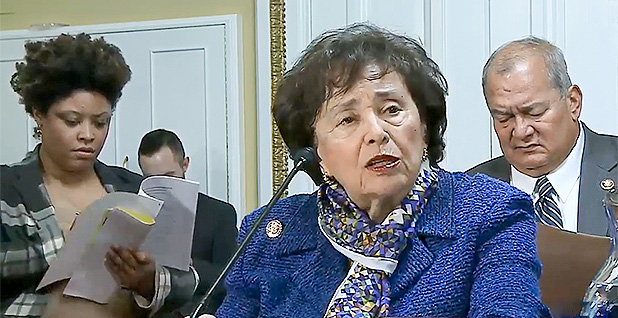 Federal disaster relief money is stuck in the shutdown stalemate, with lawmakers still at loggerheads over how to address President Trump’s demand for border wall money.

The House will vote today on a $12.1 billion supplemental package, with carve-outs for California wildfires, the 2018 hurricanes and continuing aid in Puerto Rico.

The bill is packaged up with a stopgap spending measure that would run until Feb. 8, which likely renders it dead on arrival in the Senate.

It’s the second attempt in as many days by House Democrats to reopen the government under a continuing resolution. The House yesterday failed to move a stopgap measure until Feb. 1 under a fast-track procedure requiring a two-thirds vote.

And on the 25th day of the shutdown, there were no signs of an end to the impasse over border wall funding, likely leaving disaster-stricken communities without a significant tranche of funding Congress has been trying to pass, in one form or another, since late last year.

Lawmakers effectively talked around each other yesterday at a Rules Committee meeting on the supplemental bill. Democrats blamed Republicans for resisting their attempts to reopen the government, while Republicans insisted Trump would not sign anything without money for a border wall.

Rep. Tom Cole (R-Okla.), a veteran appropriator and ranking member of the Rules panel, said moving on the disaster measure with stopgap spending attached is "an exercise in futility."

"And it’s unfortunate because this bill could pass easily with bipartisan support, quickly, but it’s fallen victim to political posturing and finger-pointing back-and-forth," Cole said.

Cole offered an amendment to strike the stopgap language from the disaster bill, but it was voted down by Democrats on the Rules Committee.

House Appropriations Chairwoman Nita Lowey (D-N.Y.) said it would be pointless to pass the disaster money without the stopgap, because portions of the government, including the Federal Emergency Management Agency and the Department of Housing and Urban Development, would remain closed and unable to administer the funding.

The disaster title of the bill includes about $2.5 billion total for resilience and mitigation projects, which Lowey said is aimed at reducing future risk from climate change.

HUD’s Community Development Block Grants would also get $1.16 billion, giving the popular program $2.8 billion in total resources when combined with the round of disaster money enacted last year.

On the Senate side, Republican leadership stayed the line yesterday.

Majority Leader Mitch McConnell (R-Ky.) told reporters he would not bring up any bill the president won’t sign, ruling out a two-thirds vote to override Trump’s veto.

"In a situation like this where the president, in my view, is in the right place, trying to get the right outcome that all of us have expressed with regard to border security, of course not," McConnell said.

"As I said nearly a month ago, it could go on a long time," Shelby told reporters. "I think you’ve got to get people to the table to talk about resolving the situation."

While the White House invited moderate House Democrats to lunch with Trump yesterday, none showed.

Rep. Charlie Crist of Florida, one of the Democrats who turned down the invitation, said he had other plans already but was not certain it would have made much difference.

"I don’t think it’s the best move because I think both sides need to respect each other," Crist said.

House leaders are canceling next week’s scheduled weeklong recess for the Martin Luther King Jr. holiday, and McConnell told reporters yesterday he will follow suit if the shutdown drags on.

"Presenting these, or similar bills, to the president without a broader agreement to address the border crisis is unacceptable," the Office of Management and Budget said in a statement of administration policy.

While Trump appears to have retreated — for now — from a plan to declare a national emergency and shift military construction funds and previously appropriated disaster aid to pay for the border wall, it’s still on lawmakers’ minds.

The House tomorrow will consider an amendment to the supplemental aid package to ban the Army Corps of Engineers from using any of the new money to build the wall.

Texas’ congressional delegation also penned a bipartisan letter to the president to register its strong opposition to the move.

"As Texans continue to rebuild and prepare for future disasters, these funds, appropriated by Congress to be spent directly on rebuilding and mitigation, are critical to helping our communities recover, preventing future flooding and protecting our constituents," they wrote.