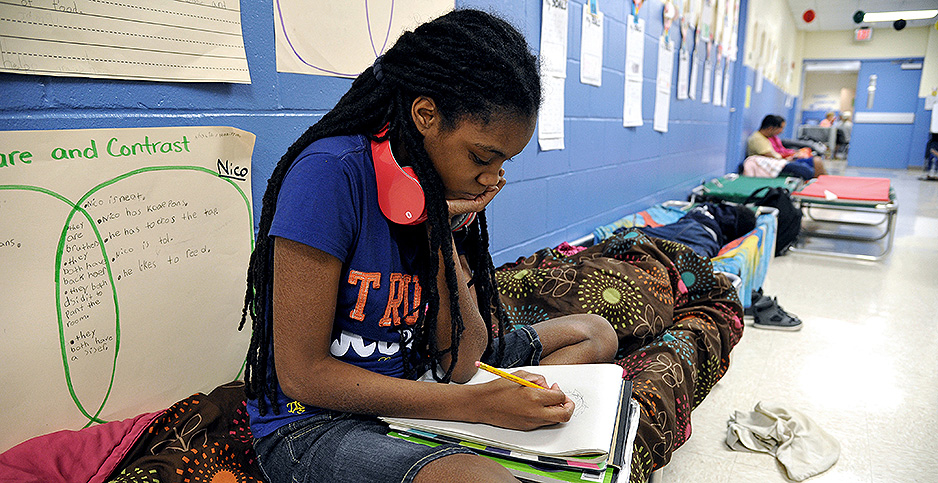 Yakeithea North sketches on her cot after she and her family evacuated from the Southside to the shelter at Twin Lakes Academy Elementary as Hurricane Matthew approached Jacksonville, Fla., in 2016. Bruce Lipsky/Florida Times-Union/Associated Press

One of the costliest storms in the past decade struck indiscriminately along the southeast coast of the United States in 2016.

The federal agency that distributed $492 million in disaster loans after Hurricane Matthew based its approvals on a method known to harm some racial groups.

The outcome was stark in two communities.

In a flooded urban area of Jacksonville, Fla., the Small Business Administration approved only 26% of the applications for low-interest disaster loans to rebuild a home or business. Altogether, those loans provided just $60,400.

In the coastal resort community of Ponte Vedra Beach, Fla., the SBA approved 84% of the loan applications. Total value: $2.7 million.

The Jacksonville area is 96% Black.

Across the U.S., the SBA has distributed nearly $40 billion in taxpayer-funded disaster loans in a racially disparate manner that has given white areas billions of dollars more to rebuild than Black areas, according to an E&E News analysis of 1.4 million SBA loan records since 2001.

The SBA has approved disaster loan applications in largely white areas at nearly twice the rate that it has approved applications in areas where Black residents are a majority. E&E News analyzed a database listing the outcome of every application from 2001 to 2018, the ZIP code of the property for which a loan was being sought and Census Bureau data on the racial population in the nation’s 33,000 ZIP codes.

In ZIP codes where a majority of people are Black, the SBA approved 28% of the applications.

In ZIP codes where at least 90% of the population is white, the SBA approved 52% of the applications.

The overall approval rate was 41%.

The value of the loans also has been unequal: People in largely white areas received more money than their counterparts in Black communities, E&E News found by comparing the amount of the loans with the damage they were intended to cover.

In the Jacksonville area, the loans covered 22% of the damage.

The disparities are familiar to Black people living with the legacy of decades-old government policies that denied credit to Black borrowers and neighborhoods.

"It’s another layer of the institutionalized racism that we’ve borne," said Rhonda Peoples-Waters, an attorney and board member of the Jacksonville NAACP.

Jacksonville has a large Black population concentrated in areas such as the 32209 ZIP code, where the SBA rejected 17 of the 23 disaster loan applications after Matthew and loaned six homeowners an average of $10,067.

"When you think about the long-term impact of this, the value of the property is really decreasing in these neighborhoods versus the Ponte Vedra, where it’s increasing," Peoples-Waters said. "It will continue and perpetuate for generations."

The SBA’s disparate loan approval rates have also put states with large Black populations at a disadvantage in getting federal money to rebuild from disasters.

In the nation’s 10 whitest states, the SBA approved 55% of the disaster loan applications.

In the 10 states with the largest percentage of Black residents, the combined approval rate was 37%.

The revelations about racial disparities come as Congress and academics focus on the possible discriminatory effects of federal disaster recovery programs. The Government Accountability Office is examining whether federal disaster programs exacerbate racial and socioeconomic inequities, and it expects to issue a report early next year.

"This shows how white privilege works. In times of disaster, when the federal government provides public resources to recover, the more privileged groups tend to get a larger piece of that assistance," Rice University sociologist Jim Elliott said when told of E&E News’ findings. Elliott published a study in February showing that wealthy, white communities benefit the most from government programs that pay homeowners to move out of floodplains.

"The rejection rate for Black communities may be completely rational," Elliott said. "But if you peel that back, you have to ask, how did they get to that point?"

The SBA did not dispute the findings by E&E News and did not comment other than to note that the agency has a policy barring it from considering a loan applicant’s gender, marital status, age, race, color or national origin.

The SBA and race are now in the national forefront as protesters rally for racial justice following high-profile killings of Black people by police. The SBA, meanwhile, is helping lead the government’s economic response to the coronavirus pandemic by administering loan programs newly created by Congress such as the Paycheck Protection Program.

Although the SBA is known for helping small businesses, it plays a large role in disaster recovery.

"The SBA is the federal government’s primary source of financing for the long-term repair and rebuilding of disaster-damaged private property," the agency says in its annual financial report.

From 2001 through 2019, the SBA gave $39 billion in low-interest disaster loans to more than 600,000 homeowners and businesses, agency records show. That’s $13 billion more than the emergency cash provided by the Federal Emergency Management Agency to people in disaster areas during the same time period.

Disaster loans come directly from the SBA — not from private lenders backed by the agency — and feature interest rates that are much lower than commercial rates and no closing costs. Businesses can borrow up to $2 million. Individuals can get up to $200,000 for home repairs and up to $40,000 to replace or repair damaged items such as cars and furniture.

Unlike other federal disaster programs that give aid based on need, the SBA gives disaster loans primarily based on an applicant’s credit score.

The SBA approves disaster loans only when it has "reasonable assurance" that a borrower will repay the money, agency regulations say. The SBA acknowledged in a recent financial report that "credit score is more of an indicator of default likelihood than any other factor."

But the reliance on credit scores opens the door to racial disparities.

While the scores reliably predict whether a borrower will repay a loan, their widespread use by lenders is under scrutiny as government reports show that Blacks, Hispanics and people in minority neighborhoods have much lower scores than whites and residents of white neighborhoods.

In ZIP codes where a majority of residents are minorities, the median credit score is 34, the Consumer Financial Protection Bureau reported in 2012.

In ZIP codes with a small minority population, the median score is 52.

The Federal Reserve found in 2007 that the average credit score for whites was 54.

"The fundamental quandary is that credit scores are predictive, but they also have all these racial disparities that are reflective of income and wealth. Those wealth disparities are a reflection of racial discrimination," said Chi Chi Wu, an attorney at the National Consumer Law Center specializing in credit scores.

"If you’re going to only make loans to people who have income, you’re going to miss the folks who need it the most," Wu said of SBA disaster loans. "If the purpose of these [disaster] loans is recovery, then looking at income alone may not make sense."

E&E News analyzed records of 1.4 million SBA disaster loan applications submitted between 2001 and 2018. The records contain no information about race but list the ZIP code of each property for which a loan was sought. The SBA released the records last year in response to a public records request from the Center for Public Integrity, which posted the data on its website.

Value of SBA disaster loans to N.Y. communities after Superstorm Sandy in 2012 and loss verified by SBA

That would have elevated the SBA’s investment in Black-majority ZIP codes to $6.2 billion from $3.5 billion.

If the SBA had made the loans equitable in terms of the percentage of property damage they covered, Black-majority ZIP codes would have received an additional $350 million in lending.

"We see the same bias over and over and over again," said University of Pittsburgh sociologist Junia Howell, whose study last year found that natural disasters and the government response increase wealth inequality. "Our government is investing repeatedly in the wealth accumulation of the white population to the detriment of our Black and Indigenous and other populations."

Lending disparities were especially pronounced following some of the nation’s most destructive disasters.

Matthew swept up the East Coast in October 2016, causing more than $10 billion in damage from Florida to Virginia.

Yet the SBA approved more than twice as much in loans for the white ZIP codes than the Black ZIP codes: $103 million versus $51 million.

After Hurricane Katrina destroyed Black communities such as the Lower Ninth Ward in New Orleans, the SBA received a record 155,000 disaster loan applications from Louisiana, including 66,000 from Black-majority ZIP codes. It approved 24% of them.

The SBA received 9,900 applications from Louisiana ZIP codes that were at least 90% white. The approval rate was 53%.

"The SBA has been a sore spot for the African American community for many years," said Beverly Wright, executive director of the New Orleans-based Deep South Center for Environmental Justice.

"Only the people who need it the least are able to get it," Wright said of the loans. "Disaster makes life miserable to minorities. The recovery has not been for us. It’s been for other people."

The SBA does not track the race of people who apply for disaster loans.

That policy prevents the agency from detecting — and fixing — racial disparities, according to researchers.

It’s also an anomaly because the SBA collects and publishes race data for other loan programs.

Percentage of applications for Small Business Administration disaster loans that have been rejected in ZIP codes with the highest shares of Black residents and of white residents. The analysis covers ZIP codes with a minimum of 100 applications since 2001. Source: E&E News analysis of SBA and Census Bureau data

"You’d think that absolutely they’d be collecting race data on that," said Bruce Mitchell, a senior research analyst at the National Community Reinvestment Coalition, referring to the disaster loan program.

"Part of their overall function as a government agency is to promote minority entrepreneurship. You’d think under all their programs they’d want to know the basic demography of their borrowers," Mitchell said.

The SBA’s Open Government Plan lists one goal: "Strengthen outreach to underserved communities, including two of the fast-growing sectors of the small business community — minorities and women — and veterans."

Failing to track racial disparities "absolves you of responsibility for racial injustices," said Elliott, the Rice University sociologist. "If you don’t know about inequality, you don’t need to fix it."

The SBA would not explain why it declines to collect race data for its disaster loan program.

Black-owned businesses received just 2.5% of the $152 billion that the SBA issued through those two programs from 2014 through 2019. Black people account for 13% of the U.S. population, yet they own just 2% of U.S. businesses with employees.

The race data is provided voluntarily by borrowers, and the SBA says its statistics are "not necessarily inclusive of all borrowers."

The SBA’s Office of Advocacy warned in a 2018 report about barriers for Black and Hispanic business owners such as minimal personal wealth and limited access to credit.

"It is clear that something needs to be fixed," the report said, citing a need to improve credit scores and wealth for Black and Hispanic business owners.

The report found that a typical Black family had one-tenth the wealth of a typical white family — $13,900 versus $134,000 — and that Black people were more likely to have loan applications rejected or only partially funded.

"Improving credit scores and wealth among minorities should be priorities for policymakers," the SBA report concluded. "These improvements are not only needed for fairness, but for our economy to operate at full capacity."