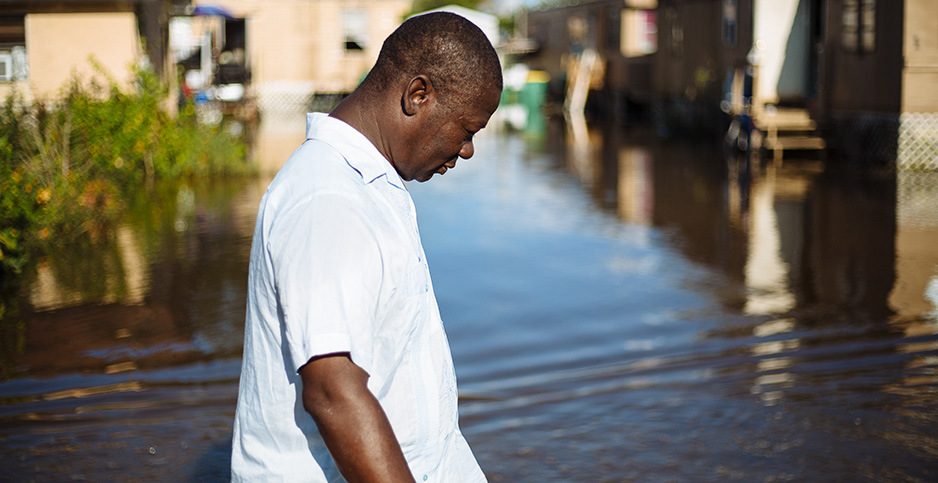 A resident of Immokalee, Fla., walked through floodwater caused by Hurricane Irma in 2017. The Federal Emergency Management Agency has created a program to help strengthen homes and other structures against climate change. Daniel William McKnight/Polaris/Newscom

The Federal Emergency Management Agency will reward states and communities that seek to address the effects of climate change under a new grant program that provides an unprecedented amount of money for resilience projects and planning.

FEMA announced last week that it will allocate $500 million next year through its Building Resilient Infrastructure and Communities program for mitigation efforts such as moving buildings out of floodplains and strengthening building codes.

"It’s a huge increase of resources that FEMA has never had available to it before," said Rob Moore of the Natural Resources Defense Council.

The new program, known by its acronym BRIC, replaces FEMA’s 23-year-old Pre-Disaster Mitigation Grant Program, which has allocated an average of $100 million a year since 2003.

BRIC places an emphasis on addressing the effects of climate change; strengthening building codes; and using natural barriers such as wetlands, floodplains and reefs to build resilience to riverine flooding and sea-level rise.

The pre-disaster mitigation funding fell well short of the demand from states. Between 2003 and 2016, the program allocated $1.1 billion to states but received requests for projects totaling $3.2 billion, according to a FEMA report.

In the final years of the Obama administration, the program provided just $25 million a year. Annual funding in recent years increased to $250 million.

The additional money under BRIC comes as climate change is increasing the frequency and intensity of hurricanes, floods and wildfires, resulting in a growing number of major disasters in the United States.

"I can’t think of another program right now that’s putting up this much money to do mitigation, infrastructure and resiliency," said Amelia Muccio, director of mitigation at Hagerty Consulting Inc., an emergency management company. "I’m hoping that every year they’re able to make an investment of this size, and as BRIC becomes more heavily funded, the overall spending on federal disasters goes down."

FEMA will allocate $446 million of the $500 million through a competitive process that evaluates funding proposals from states and municipalities on a variety of factors. The remaining $54 million will go to states, territories and American Indian tribes, with each entity receiving up to $600,000.

In evaluating state and municipal discretionary funding requests, FEMA will score each proposal on 14 factors that rate the potential effectiveness of a project and the applicant’s previous work on resilience.

In a major shift from the old disaster mitigation program, FEMA will award points to projects that "anticipate future conditions" such as "climate changes, sea-level rise," and changes in population and demographics. The old program was silent on climate change.

"There’s much more recognition of climate risks," Moore of NRDC said. "A lot of things are getting renewed emphasis."

The BRIC program makes other changes from its predecessor:

"A lot of projects need to be done on the coastline, and they’re expensive," Muccio said.

The BRIC program was authorized under a major federal disaster law enacted in October 2018 that aimed, among other things, to provide more federal money for mitigation and resilience projects.

The new law provides a steady stream of funding for the BRIC program by allowing FEMA to set aside for the program a small percentage of the money it spends on disaster recovery each year.

The old Pre-Disaster Mitigation Grant Program had no guaranteed funding source and allocated only as much money as Congress and the White House approved each year. The sums fluctuated year to year.

"BRIC is not only a substantial increase in dollars that FEMA can distribute to state and local government, it also represents a stability of funding that has never existed," Moore said. "The old program has been on a yo-yo budgetwise since its inception."