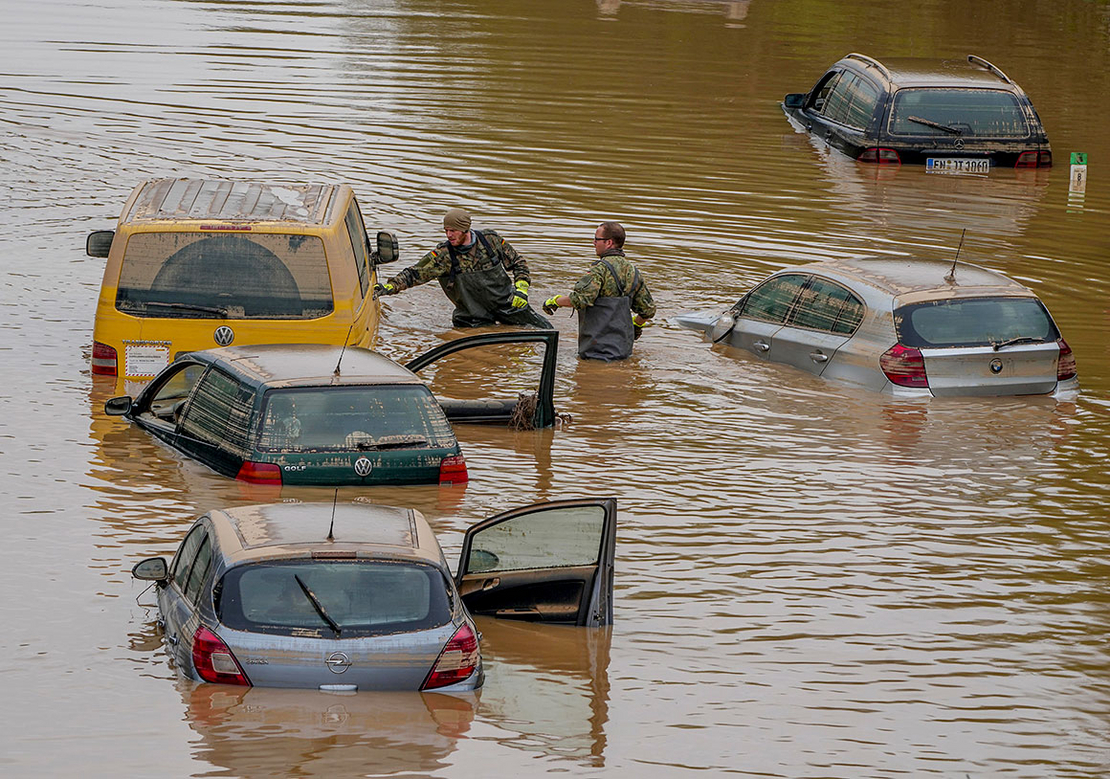 When a record-breaking heat wave popped up in weather models at the end of June, scientists could scarcely believe it.

The forecasts were apocalyptic: temperatures above 110 degrees Fahrenhit across the typically temperate Pacific Northwest. In some places, they skyrocketed as much as 45 F above average.

“An unfathomable temperature anomaly,” meteorologist Tyler Hamilton called it on Twitter. Climate scientist Daniel Swain noted that the temperatures were so extreme “I think folks are having difficulty putting them into context.”

By the end of the week, the heat wave would deliver eye-popping impacts — shattering all-time records along the way. Seattle broke 110 F. Portland reached 116 F. And the tiny village of Lytton in British Columbia hit a cataclysmic 121 F, just a few days before a devastating wildfire consumed the town.

“Many folks, including myself, were actually skeptical when the models said it was going to be as bad as it was going to be,” said Swain, a scientist at UCLA in an interview with E&E News. “And then it happened, and it was shocking.”

The summer’s only halfway over, and it’s already been marked by a string of flabbergasting weather events, not just in the U.S., but all over the world.

The city of Zhengzhou, Henan’s capital, received a year’s worth of rainfall in three days. Days later, India’s Maharashtra state was hit by some of its heaviest July rainfall in decades, unleashing flash floods and landslides throughout the region.

All of these events can be linked to global warming in some way, experts say. Climate models have consistently suggested for years now that human-caused warming is making extreme weather events worse.

Still, the intensity of some recent events has raised eyebrows even among climate scientists, prompting a spree of surprising headlines. “Europe’s deadly floods leave scientists stunned,” read one recent story in Science. “Climate scientists shocked by scale of floods in Germany,” read another in The Guardian.

“Science failed to predict flood and heat intensity,” suggested one particularly provocative story by the BBC — a contentious framing that elicited some pushback from climate scientists.

“Climate science has not failed,” one tweeted in response. “Despite what some are saying in the media, we are *not* seeing a failure of predicting overall patterns of *climate* change,” said another.

So did science see all of this coming?

Like almost everything involving climate science, it’s complicated. And it depends on exactly what question you’re asking.

If the question is about how well scientists have predicted global climate change, the answer is extremely well.

For decades, climate models have accurately simulated both the speed of global warming and the general ways in which extreme events can change as the planet heats up. They’ve shown heat waves becoming more frequent and more intense, cold waves becoming less frequent and less intense, and extreme precipitation events getting worse.

And that’s what has been happening, on a global scale, in real life.

“Given all of that, the big picture is: I actually think that these predictions have been quite good over decades,” Swain said.

“The question was: Do the existing models produce these kinds of things?” he said. “And the answer is yes — yes, they do. So the claim that’s like these are completely unexpected kind of rings a little bit hollow.”

If the question is more specific, the answer is more complicated. Did models predict these exact extremes in these exact locations? Not exactly — or at least, maybe not so soon.

“It is true that if you look at global climate model data, you generally don’t see heat waves that big in the Pacific Northwest or flood events that big in parts of western Europe at this point in their projections for how things would evolve,” Swain said.

The models did predict the overall trends — heat waves in the western U.S. would grow more intense, for instance, and floods would happen more frequently in Europe.

But an exact record temperature of 120 F in British Columbia in July 2021?

But that’s not a science failure, experts caution. Nobody actually expects global climate models to make those kinds of granular predictions. They just aren’t built for it.

That means they aren’t equipped to simulate local and regional events in fine detail.

“Should we have expected the global climate models to have been able to reproduce these things? My sense is that it’s sort of asking something of a tool that it wasn’t designed to do in the first place,” Swain said.

That doesn’t mean there aren’t any models out there capable of doing it. In fact, there are some models that predicted many of this summer’s events in highly accurate detail.

Unlike global climate models, weather models are designed to operate on a fine scale. They’re able to do this because they also run on very short time periods. They’re generally most accurate within a two-week window.

The dream scenario would be a model that can do it all: make detailed projections about local events, all over the world, years in advance. It doesn’t exist yet, but some scientists are pushing for it.

It’s an idea that’s been floating around for years — a massive project aimed at constructing a single, unified climate and weather modeling platform.

This kind of climate supermodel would require vast levels of consistent supercomputing power.

New and improved supercomputers are allowing for advancements in climate models over time. Still, this kind of project may be more ambitious than most people realize, Schmidt cautioned.

Advocates of such a megaproject are “asking here for like six orders of magnitude better computing in a decade, which is a massively accelerated schedule for what we can do,” he said.

There are other strategies in the meantime.

Regional climate models have been around for decades and are often used as a complement to global climate models, zooming in on climate impacts over a smaller area of the globe.

For even more localized predictions, scientists are taking some creative approaches.

“One thing we are working on right now is stringing together weather and climate models,” Swain said. The idea is to feed coarse projections about extreme weather events from global climate models into weather models to get better predictions about them at a local scale.

At the same time, scientists are also working to better understand the underlying physics of extreme events — and why they can be so astounding.

A recent study, conducted by research consortium World Weather Attribution, found that the Pacific Northwest heat wave would have been virtually impossible without the influence of climate change. In and of itself, that’s not a surprising result. Many studies have reached a similar conclusion about other recent extreme weather events.

The real surprise was that, statistically speaking, the event hardly seemed possible, even in today’s warming world (Climatewire, July 8). It was so far outside the bounds of anything the region had ever experienced that a statistical model suggested it shouldn’t have been possible.

“That rather shook me and my colleagues,” said Geert Jan van Oldenborgh, a climate scientist at the Royal Netherlands Meteorological Institute and co-leader at World Weather Attribution. Van Oldenborgh has conducted similar analyses on many extreme weather events and says this is the first time he’s seen such a result.

He and other colleagues are working on follow-up studies aimed at better understanding the event. One of them is investigating a variety of factors that could have increased the chances of this kind of event, such as drought or changes in the jet stream.

Another study is conducting a statistical analysis of all the major heat waves across the Northern Hemisphere in recent history. It’s an attempt to determine whether the recent event was “just a fluke,” van Oldenborgh said.

Even as local climate predictions grow more precise, there’s always the chance of occasional outliers — freak events that fall far outside the bounds of what models suggest is likely. These might happen by sheer coincidence of perfect conditions lining up.

More in-depth research can help scientists understand whether this summer’s events are outliers, or whether these kinds of ultra-extremes might happen more often from now on.

“Everybody is highly motivated,” van Oldenborgh said. “Because we’re worried.”

‘That record is likely to get broken’

As temperatures soared across the Pacific Northwest, both human and natural communities reeled in response.

Power cables melted and roads buckled. Salmon swimming in the scalding Columbia River broke out in lesions and fungal infections. Mussels on the coast cooked inside their shells. Scientists calculate that more than a billion marine animals likely died along the Vancouver coastline alone.

And experts estimate that hundreds of people died across the Pacific Northwest.

The weather extremes this summer — the magnitude of the heat, the sheer amount of rainfall — have been shocking in and of themselves. But perhaps even more surprising is the devastation they’ve left in their wake.

It may be that what the world actually didn’t see coming wasn’t so much the extremes themselves. It was how bad the aftermath would be.

“So many of us weren’t surprised by the fact that such events happened,” said Reto Knutti, a climate scientist at the Swiss Federal Institute of Technology in Zurich, by email. “[B]ut we were of course unprepared for the impacts they had on society.”

Part of the problem is that societies have largely designed themselves around the kinds of risks they’ve experienced in the past, not what’s coming for them in a much-warmer future. Roads and power lines in the Pacific Northwest aren’t designed for extreme heat because it wasn’t normal when they were built; fewer households have air conditioning because blistering heat waves were, until recently, unthinkable.

“It is still very difficult to actually know how to prepare for events that are outside of what we’ve experienced,” said Noah Diffenbaugh, a climate scientist at Stanford University.

It’s all the more difficult when the baseline for “normal” is constantly shifting.

Suppose a community wants to build a bridge that can withstand a 500-year flood, an event with a 1-in-500 chance of happening in any given year. Today’s 500-year flood is different from what it was 50 years ago. In another few decades, today’s definition may also be out of date.

“Given the nonstationarity of the climate — given that these changes are continuing, the extremes are continuing to intensify — it is not enough to just prepare for the last record-setting event that we had,” Diffenbaugh said. “Because that record is likely to get broken.”

A study published last week in Nature Climate Change found that record-shattering heat extremes will occur more frequently across the Northern Hemisphere’s midlatitudes — and the faster the world warms, the more likely they’ll be. That means events considered extreme outliers today, like the Pacific Northwest heat wave, will become less and less extraordinary over time.

In a scenario assuming continued high greenhouse gas emissions, weeklong record-shattering heat events could become anywhere from three to 21 times more likely in the latter half of this century.

Under the Paris climate agreement, nations around the world are striving to keep the planet’s temperatures from rising more than 2 degrees Celsius above their preindustrial levels. For the time being, the emissions-cutting pledges that participating countries have submitted still aren’t enough. The world is currently on track to warm by about 3 C without stronger action.

It’s hard to make decisions without knowing exactly how much the world will warm over the next century and how much worse extreme events will get. Part of the challenge of these times is preparing for the worst while working for the best.

“I will say, as someone who studies the influence of climate change on extreme events, that we’re likely to continue to get extreme events that exceed what we’re prepared for,” Diffenbaugh said.

That means communities must “try to figure out how to design for a climate that we know is changing, that we know is becoming more intense, that we know is increasingly likely to produce events that fall outside of the historical ranges — and how to be resilient to that reality.”