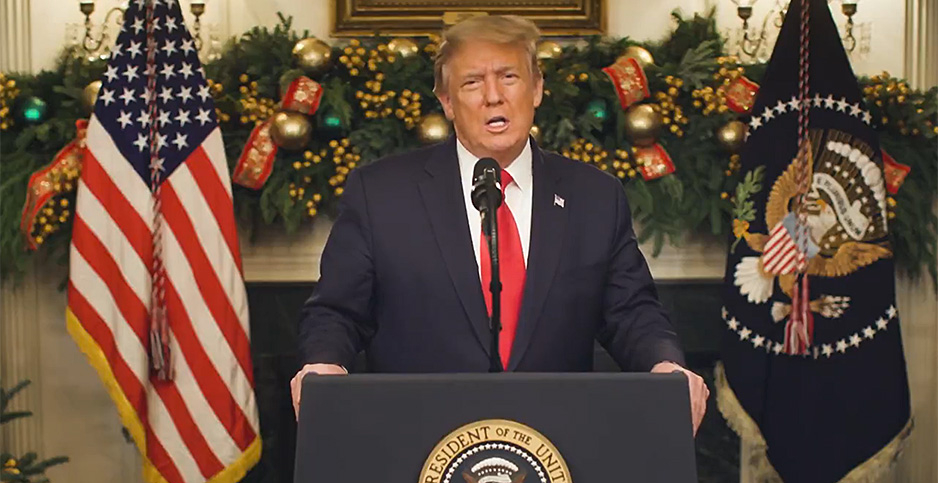 President Trump is insisting on last-minute changes to the $2.3 trillion year-end spending and pandemic relief bill, threatening to scuttle a host of hard-fought energy and environmental agreements that are part of the deal and raising the prospect of a post-Christmas government shutdown.

In a surprise video posted on Twitter last night, Trump called on lawmakers to "get rid of the wasteful and unnecessary items from this legislation and to send me a suitable bill."

"It really is a disgrace," the president complained, citing a listing of objectionable provisions contained in the massive package, including foreign assistance and $25 million to combat invasive Asian carp.

Additionally, Trump wants lawmakers to raise the direct payments to individuals contained in the bill from $600 to $2,000 for individuals and $4,000 for couples.

Direct payments were a major source of contention over the last week of talks, with Democrats and Treasury Secretary Steven Mnuchin pushing for their inclusion over the objections of Senate Republicans, who did not include any funds in the proposal they floated earlier this month.

While Trump did not explicitly say he would veto the bill, the package passed both chambers by wide margins, virtually guaranteeing that Congress could override a veto and enact the measure over the president’s objections.

But Trump’s gripes also raise the prospect of a government shutdown Monday, when the seven-day stopgap spending measure that is currently funding the federal government expires.

Lawmakers passed the short continuing resolution earlier this week to provide sufficient time to enroll the nearly 6,000-page omnibus deal for transmittal to the White House for the president’s signature.

That still hasn’t happened, raising the prospect of a "pocket veto," which, as Roll Call reports, could allow the measure to die unless action is taken before the start of the 117th Congress in early January.

Hanging in the balance are major energy and environmental provisions agreed to this week, including a major bipartisan energy package, the Water Resources Development Act and a tax deal to extend key clean energy tax breaks (Energywire, Dec. 23).

Democrats quickly seized on Trump’s demand for bigger direct payments, with House Speaker Nancy Pelosi (D-Calif.) announcing that she will try to pass legislation increasing the amount of the checks to $2,000 by unanimous consent when the chamber convenes tomorrow morning for a pro forma session.

In a letter to her caucus sent this morning, Pelosi said she and Senate Minority Leader Chuck Schumer (D-N.Y.) repeatedly pressed Republicans on "what would be the highest number the president would accept for direct payments, and they responded with Sphinx-like silence."

However, to pass the increase unanimously will require the consent of House Minority Leader Kevin McCarthy (R-Calif.), she noted.

"If the president truly wants to join us in $2,000 payments, he should call upon Leader McCarthy to agree to our Unanimous Consent request," Pelosi wrote, noting that she and Majority Leader Steny Hoyer (D-Md.) are still waiting to hear from the top House Republican.

Trump’s demands put Hill Republicans in a bind, given that some of the president’s most stalwart allies have opposed direct payments.

GOP leaders have not signaled their next move, but the Senate is also slated to hold its own pro forma session tomorrow.

Adding to the stakes is the expiration of unemployment benefits and other pandemic-relief programs next week.

"The entire country knows that it is urgent for the president to sign this bill, both to provide the coronavirus relief and to keep government open," Pelosi wrote today.