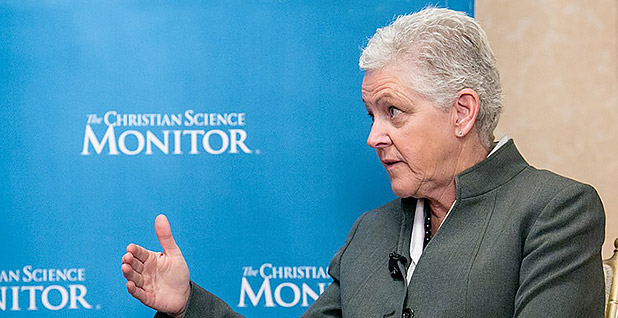 U.S. EPA Administrator Gina McCarthy cautioned today against reading too much into high-profile decisions by the Obama administration on the Dakota Access and Keystone XL pipelines.

"They are two very distinct decisions if you look at why they were made," McCarthy said of the two projects that environmentalists fought fiercely.

The Army Corps of Engineers announced yesterday that it would not approve an easement across Lake Oahe at the North Dakota-South Dakota line for the Dakota Access project, signaling there could be what McCarthy today called a more "robust process" under the National Environmental Policy Act.

President Obama’s decision last year to reject the 1,700-mile Keystone XL pipeline from the oil sands of northern Alberta to the Gulf of Mexico was in part about the project’s greenhouse gas emissions, "but it should not send a signal that that type of concern is applicable to a broad range of infrastructure decisions that are going to be made across this country to meet our energy needs," McCarthy said.

Grass-roots activists have argued the Dakota Access pipeline also fails to pass the test on climate, but McCarthy dismissed the idea that the most recent decision would be the inspiration for more protests (E&E Daily, Dec. 5).

"I don’t think it is sending an overall policy statement on infrastructure," McCarthy said during an interview with The Christian Science Monitor this morning at a Washington gathering.

The outgoing EPA chief expressed optimism the United States can continue to meet its climate goals even if the agency’s controversial Clean Power Plan for curbing electric utility emissions is not upheld, reiterating the message McCarthy has tried to send since President-elect Donald Trump launched his transition (E&E News PM, Nov. 21).

Trump is expected to try to fast-track pipeline approvals, including Keystone XL. The natural gas industry is also counting on him to go after EPA policies that it sees as impeding production, such as standards limiting methane emissions from existing oil and gas sources.

McCarthy signaled EPA intends to forge ahead with that rulemaking, saying that its approach is "reasonable, appropriate" and inclusive of industry concerns. She challenged the assertion by environmentalists that the Obama administration’s legacy was to "choose" natural gas over cleaner forms of energy.

"I think that was driven more by the market and advanced technologies to actually get more natural gas out and make it inexpensive," McCarthy said.

Environmentalists such as 350.org founder Bill McKibben say natural gas is a "cul-de-sac," not a bridge to lower carbon, and suggested the Obama administration had wasted the past seven years by pursuing the technology as an alternative to coal-fired power plants (Greenwire, Oct. 10).

Many green groups are girding to fight new infrastructure investments in natural gas.

McCarthy acknowledged those decisions will be made by Trump’s White House, adding, "But this administration has done everything it could to recognize where the energy world is headed, and I’m just not seeing much difference there."

On another closely watched regulation, EPA’s standards for oil refinery emissions, McCarthy was coy about timing.

"We have very little time here," she said. "My job is to do what the agency has already indicated it has working on. I don’t think I have any surprises up my sleeve."