Divisions over climate, energy burst into the open 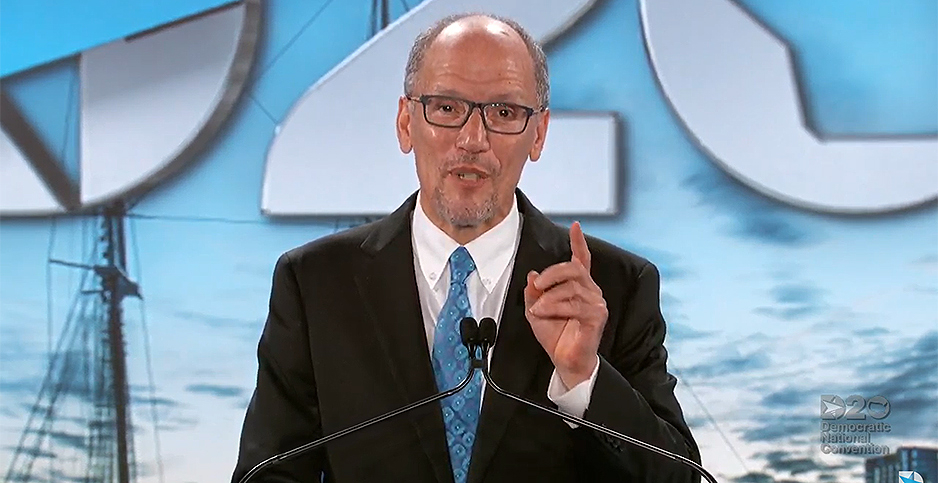 Climate activists have left a clear mark on this week’s Democratic National Convention, but divides remain between progressives and the party’s establishment, particularly after a dispute over the 2020 platform that bubbled up yesterday.

Even with former Vice President Joe Biden, a relative moderate, at the top of the ticket, progressives have succeeded in pressing for an ambitious climate agenda, and their ideas have dominated discussion about the issue during the convention this week.

During a virtual event yesterday, Democratic National Committee Chairman Tom Perez said the party’s Environment and Climate Crisis Council is "a group of serial activists" that has pushed Democrats to pay more attention to climate change.

At the same time, some progressives spent yesterday afternoon blasting the Democratic National Committee for dropping a pledge to repeal fossil fuel subsidies from the 2020 platform.

It was evidence of the ongoing dynamic in the party. Progressive climate policies are increasingly reaching the Democratic mainstream, but activists remain frustrated with party leaders for refusing to adopt their more ambitious proposals.

Ending subsidies for fossil fuels is "noncontroversial" among Democrats, said RL Miller, a progressive climate activist who was elected to the DNC earlier this year.

"I cannot fathom any reason for pulling it out other than the corporate wing of the DNC is uneasy," Miller said.

The 2016 Democratic platform included a pledge to eliminate "special tax breaks and subsidies for fossil fuel companies," an idea climate activists have long seen as a no-brainer.

As Democrats gathered last month to finalize the 2020 platform, DNC officials approved a manager’s amendment, obtained by E&E News, that included dozens of new additions, including a commitment that "Democrats support eliminating tax breaks and subsidies for fossil fuels, and will fight to defend and extend tax incentives for energy efficiency and clean energy."

But while other changes in the manager’s mark were adopted in the final platform, the DNC dropped the fossil fuel subsidy language.

The DNC did not return requests for comment. But a spokesperson told HuffPost, which first reported the omission, that the language had been added "incorrectly" and was removed "after the error was discovered."

On the whole, the 2020 platform is more ambitious on climate than it was in 2016. Plus, both Biden and Sen. Kamala Harris (D-Calif.), his running mate, openly support ending subsidies for fossil fuels.

But Miller and other climate activists were incensed, particularly after they spent months during the primary fighting with the DNC to have a climate-focused debate of the Democratic candidates.

"Joe Biden and Kamala Harris are against subsidizing the fossil fuel industry. And people across the country are calling on Democrats for a comprehensive plan to end fossil fuel extraction," said Brett Hartl, chief political strategist at the Center for Biological Diversity Action Fund, in a statement.

"It’s shameful to see the DNC undermining our climate and health along with their own presidential ticket," he said.

‘A much better direction’

Still, it’s clear that the progressive movement has come a long way, even since the presidential primaries began last year.

Biden’s climate plan would invest $2 trillion in infrastructure and clean energy and end greenhouse gas emissions in the electricity sector for 2035.

It’s the most ambitious a major party candidate has ever proposed, and it came after relentless activist pressure during the primaries.

"The scale of their plan, of $2 trillion, is both enormous and adequate," Washington Gov. Jay Inslee (D), who campaigned on climate change during the presidential primary, said during the Environment and Climate Crisis Council meeting yesterday.

"And the fact that they’re thinking in these terms with the scale of this is just thrilling to me," said Inslee.

The event brought together a group of progressives and advocates, mostly from the left flank of the party, to praise Biden’s commitments to climate and environmental justice before he formally took the Democratic nomination last night.

But the fossil fuel subsidy controversy also dribbled down to those virtual convention sidelines.

After Miller won her spot on the DNC, she told the HEATED newsletter her first priority would be to tell the DNC’s Perez to "fuck off."

She did just that in the chat during the virtual climate event before her messages were apparently deleted by organizers.

But Hartl said in an interview that he’s ultimately encouraged by the strides progressives have made, despite the fact that they’re still "swimming upstream against very powerful special interests."

"That fight is not over, but I think we are definitely moving in a much better direction than where we were even a year ago," he said.

On the virtual main stage of the convention, that movement wasn’t so obvious, at least during the first two days.

On Monday night, the only substantive mention of climate came from Sen. Bernie Sanders (I-Vt.), the self-described democratic socialist who came in second in the primary running from Biden’s left.

"Joe will rebuild our crumbling infrastructure and fight the threat of climate change by transitioning us to 100% clean electricity over the next 15 years," said Sanders, who spent much of his keynote speech emphasizing Biden’s various progressive policy proposals.

"These initiatives will create millions of good paying jobs all across the country," Sanders said.

But more centrist party leaders made their own commitments to fight climate change yesterday, even if it wasn’t a focal point.

If Democrats clean up in November, "we will take strong, decisive action to combat climate change to save the planet," Senate Minority Leader Chuck Schumer (D-N.Y.) said last night.

Lujan Grisham pushed her state to pass an aggressive clean energy bill last year, but New Mexico is also heavily reliant on oil and gas revenue, and she has suggested she would resist a federal drilling ban.

Still, the climate movement is much more vocal than it was in 2008, before the "American Clean Energy and Security Act of 2009," also known as the Waxman-Markey bill, failed in the Senate, marking the last real attempt to combat climate change in Congress.

"What we’re going to have to do to fight fossil fuel companies and electric utilities is get people in the streets probably to actually hold the Senate’s feet to the fire, hold the administration’s feet to the fire to actually get real climate legislation passed," Leah Stokes, professor at the University of California, Santa Barbara, who tracks climate politics, said during a virtual convention event Monday.

"So get ready to be involved, whatever that looks like in 2021, because as much as we’re doing a great job of generating the ideas on the inside and building that political will, we are probably going to need a big movement," Stokes said.