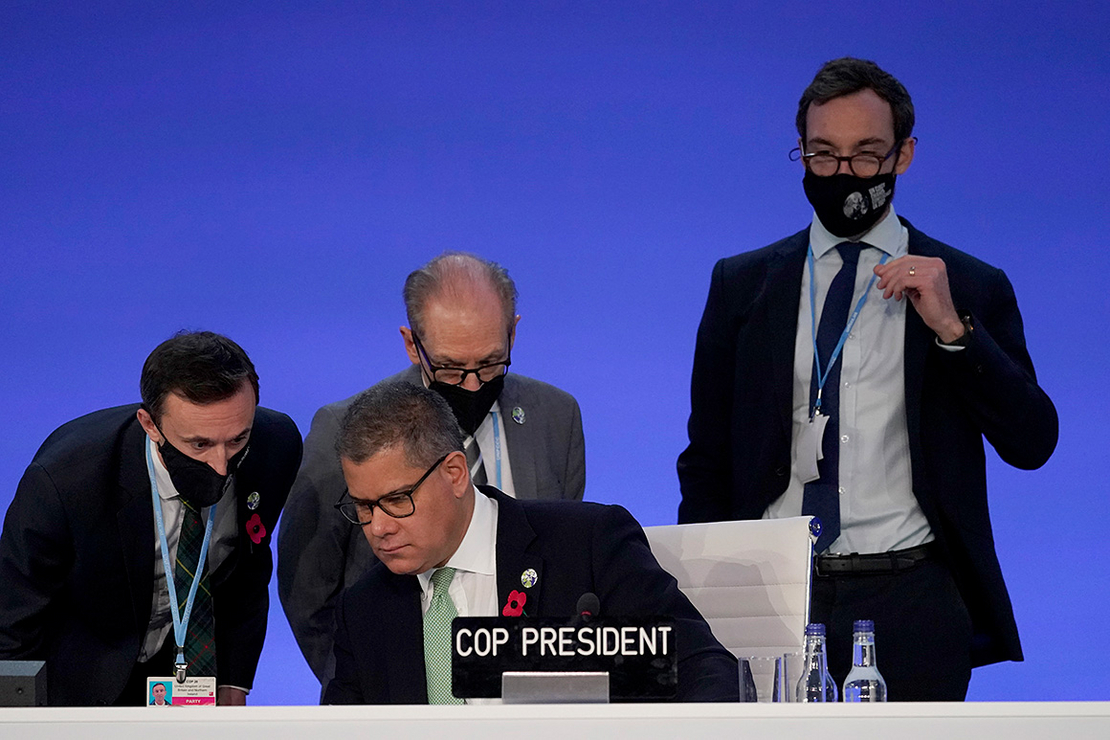 GLASGOW, Scotland — More than 24 hours after climate talks were slated to end here, ministers from 197 countries forged an agreement that for the first time asks countries to strengthen their climate commitments in back-to-back years while accelerating the phase out of coal and fossil fuel subsidies.

The final text of the United Nations’ 26th climate conference, known as COP 26, elevated the concerns of nations threatened by the gravest effects of global warming by doubling the amount of money for adaptation projects in poorer countries. It also asks world leaders to submit stronger promises to reduce carbon emissions by the end of next year, instead of in 2025. It would be the first time nations offer new emissions pledges two years in a row, in 2021 and 2022.

And the agreement marks a watershed moment by explicitly identifying fossil fuels as the cause of climate change even as most member-nations continue to widely use coal, oil and natural gas. The final text calls for “accelerating efforts” to phase down “unabated coal power and phase out inefficient fossil fuel subsidies.”

The talks, which ended today after nearly two weeks of negotiations and pageantry, was dogged by deep divisions between rich and poor nations over the hesitancy of economic powerhouses like the U.S. to accept responsibility for their disproportionate degradation of the climate.

There were efforts to establish a first-ever fund to compensate vulnerable nations for losses that can never be restored, stemming from rising seas and other unstoppable climate effects. That language for so-called loss and damage was never included in the working drafts, in part because of U.S. opposition.

Ministers acknowledged the shortcomings of the agreement but said they moved forward “in the spirit of compromise.”

“You can’t let the perfect be the enemy of the good, and this is good. This is a powerful statement,” said U.S. climate envoy John Kerry.

The overarching goal of this year’s United Nations climate conference, known as COP 26, was to rally countries toward action that would cut emissions enough to avert the worst effects of climate change. It comes on the heels of a megadrought in the western U.S., historic flooding in Europe, deadlier heat waves and the all-but-certain loss of most corals worldwide.

For many, the success of COP came down to money for alleviating the effects of warming already being felt and preventing the future pain from inundation, disappearing drinking water, heavier downpours and overheated crops.

The omission of a path for funding loss and damage was a stinging defeat for developing nations. The final text offered a compromise by establishing a “dialogue” about ways to pay for unstoppable climate damages.

Ahmadou Sebory Touré, the lead negotiator for Guinea who spoke on behalf of a coalition of more than 130 countries known as the Group of 77, expressed “extreme disappointment” that the final text failed to establish a financial instrument for collecting and distributing loss and damage money.

The talks did finalize rules for a new emissions trading mechanism under the Paris Agreement that prevents the same reductions from being counted toward multiple countries’ commitments. It also limits the number of credits generated under the Kyoto Protocol that can enter the Paris market.

But advocates say the text on so-called Article 6 creates some loopholes that might allow lower-quality credits to be sold on the new market.

This year’s negotiations were particularly fraught due to the amount and complexity of issues that needed addressing, as well as increasing evidence that the rapid pace of climate change is affecting every country — regardless of the size of its economy.

“We are concerned that we are leaving this COP with everybody a little more than a little unhappy,” said Swiss Environment Minister Simonetta Sommaruga.

Tina Stege, climate envoy for the Marshall Islands, was optimistic that the talks moved global climate action forward, at least a little.

“We have much work to do,” she said. “But it does represent real progress, and that is what we need at this moment.”