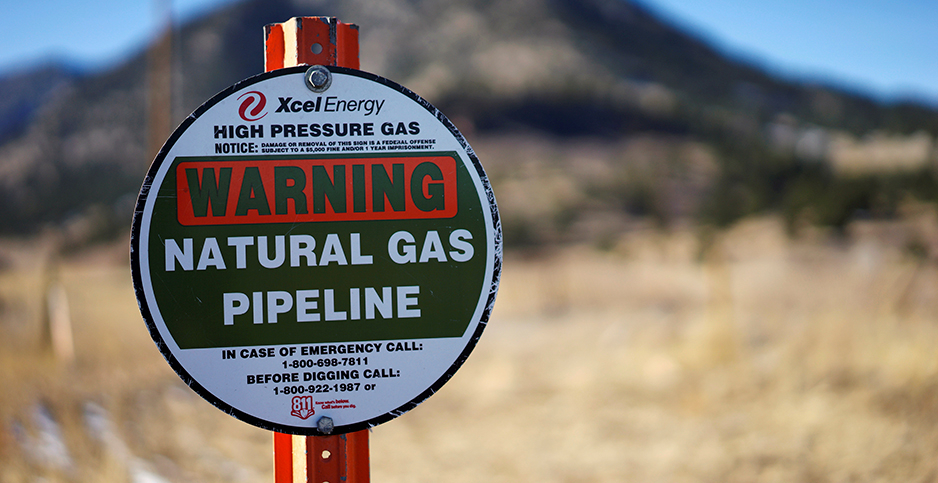 U.S. electric and gas utilities are gearing up to launch a voluntary methane reporting initiative to track emissions. A sign marking the location of a natural gas pipeline in Golden, Colo., is pictured. Rick Wilking/REUTERS/Newscom

The nation’s electric and natural gas utilities are preparing to launch a new initiative aimed at compelling companies across the gas supply chain to measure and report their methane emissions using a new metric.

Yet it’s unclear what sort of buy-in the Edison Electric Institute (EEI) and the American Gas Association (AGA) will get from the likes of Exxon Mobil, Chevron, Equinor, Williams, Kinder Morgan and TC Energy.

A final draft of the protocol that calls for getting "methane intensity reporting done on a relatively consistent basis" has been circulating among utilities since the end of December. EEI and AGA plan to make it official at the end of the month, said Richard McMahon, EEI’s senior vice president of energy supply and finance.

Like carbon dioxide, methane is a prevalent greenhouse gas. But it absorbs the sun’s heat and warms the atmosphere at a much higher rate than CO2.

"We’re going to start signing up all of the midstream and upstream companies who assisted us in the development of this measurement protocol, to basically commit to use it," he said.

"We don’t think voluntary measures are an adequate substitute for stringent and mandatory regulation," he said, pointing out that protocol "is not even a reduction program."

"I don’t really see what the purpose of this program is in terms of what additional value it is supposed to add," he said. "You can’t even come close to actually addressing the extent of the climate crisis unless you actually shift away from fossil fuels altogether."

The initiative was previewed at EEI’s annual financial conference in November (Energywire, Nov. 12, 2019).

It is intended to help burnish the utilities’ environmental credentials and image with investors, customers and regulators as concerns about climate change are driving opposition to gas usage along the lines that coal experienced in recent years.

Nearly all of the data required to calculate a company’s methane emissions intensity is measured and reported to EPA’s Greenhouse Gas Reporting Program, EPA’s greenhouse gas inventory or both, EEI said.

But to assure that the intensity measurement is "realistic," in some cases EEI and AGA will require companies to account for emissions from operations and facilities that are not covered by EPA’s programs, the protocol says.

"We’re asking our companies to look at who their suppliers are and see if they’re participating in NGSI," McMahon said.

"When we look up the supply chain, we can say, ‘We’re your largest customer. Our customers are looking for cleaner energy. Help us help them,’" he said.

Members such as BP, Exxon Mobil and ConocoPhillips agree "that methane leaks and flaring can and must be reduced," she said, as it’s "the smart thing to do to eliminate waste of a valuable product."

"There is an overall recognition among the INGAA members that I’ve spoken to of the benefit in having a common metric," said Don Santa, president and CEO of INGAA and a former member of the Federal Energy Regulatory Commission.

But pipelines companies are, to varying degrees, already trying to address methane, Santa said. INGAA, he said, hasn’t taken a position on the protocol.