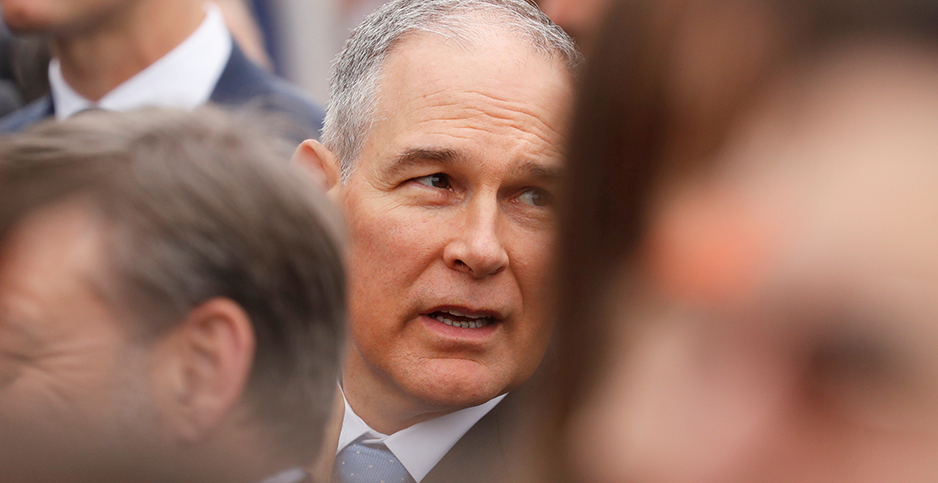 Scott Pruitt’s attorney was working last year to set up a fund to pay the then-EPA administrator’s legal expenses, months before ethics allegations exploded into a national scandal.

Cleta Mitchell, a partner at Foley & Lardner LLP and the trustee of Pruitt’s legal defense fund, sent an email last November to the Office of Government Ethics, saying she had been retained to set up the legal defense fund, according to documents obtained by the Campaign Legal Center and shared with E&E News.

The records reveal that Pruitt’s attorney was working behind the scenes to set up a legal defense fund long before its existence was made public. Pruitt confirmed that the fund was in operation in May during questioning from Senate Democrats (Greenwire, May 16). The documents also indicate that Pruitt was subject to a bar complaint in Oklahoma for having sued EPA before leading it, a complaint that has not been previously reported.

Last November, Pruitt’s troubles were nascent, with an inspector general review of his travel launching just a few months earlier.

But that was well before Pruitt’s ethics allegations spun out of control, set off with news in March that he had rented a Capitol Hill condo tied to a lobbyist with business before EPA. By July, as more and more investigations piled up, Pruitt resigned from the agency.

The newly released records detail Mitchell’s dealings with the ethics office over the past year. Sources familiar with Pruitt’s legal defense fund confirmed to E&E News that the redacted OGE records show interactions between Mitchell and OGE officials discussing the ex-EPA chief and his legal defense fund.

"I have several questions which I would like to discuss with you, so if you could please let me know a convenient time to talk, I will call you at that time," Mitchell said in the Nov. 28, 2017, email. She said she had been in touch with Stefan Passantino, then the White House deputy counsel in charge of compliance and ethics oversight, who had sent her the template document regarding such trusts. Mitchell and Seth Jaffe, chief of OGE’s ethics law and policy branch, agreed to do a call that afternoon.

Other OGE records show the ethics office recommended to "avoid appearance of corruption concerns" that donors to the fund be "voluntarily disclosed," although that "it is not strictly required by ethics rules." Pruitt told lawmakers in May that he planned to disclose his donors.

In early April, Mitchell left a voicemail at OGE asking about who could donate to a legal defense fund. OGE officials left two voicemails in reply that month before connecting again with Pruitt’s lawyer on April 27.

That day, Mitchell indicated that Pruitt’s defense fund was in existence and did not become "active" until the 2018 calendar year, according to OGE notes of the call.

Mitchell had several questions as well, including whether a "passive investor" in a company with business before EPA would be "a prohibited source" for Pruitt’s defense fund. In addition, she worried that "there is a ‘fear’ that ‘everything is someday, somehow going to be subject to the EPA.’"

Mitchell asked, "With no specific transactions, business, matter, proceeding, in the past or in the present, is that a ‘prohibited source’?"

OGE officials advised Mitchell on who can and cannot donate to the fund and gave her contact information for the EPA ethics official to help determine which donors would be banned from contributing to Pruitt’s fund due to them having interests before the agency. The ethics office also said that Mitchell had raised the possibility of creating a 527 organization, a tax-exempt political group that can raise unlimited funds and is required to disclose its contributions and expenditures.

"We told her that, regardless of the way the fund is formed, the fund would need to be consistent with OGE’s template. We also noted that the fund would otherwise need to qualify for and comply with the requirements of a 527 organization," said ethics officials.

IRS records show that Mitchell had already formed a 527 group that month to serve as a legal defense fund for Pruitt.

Named the "Scott Pruitt Legal Expenses Trust," its establishment date is April 24, but it was posted online on July 5, the day Pruitt announced his resignation, according to the IRS website. Mitchell is listed as its trustee, the group’s sole officer.

Mitchell would have another call with OGE — this time in July, days after Pruitt left EPA.

OGE notes of the July 11 call show there was discussion of how "certain outstanding legal bills were likely reportable" as well as whether gift rules still apply to former federal employees. Mitchell also brought up establishing "a new fund" as a 527 group, incorrectly written as "a 529 organization" in the notes.

OGE confirmed that the "529 organization" described in the agency’s records should have read as a "527 organization" but declined to comment further when contacted by E&E News.

In addition, Mitchell asked if Pruitt would have to disclose contributions to his legal defense fund. She was advised that those donations must be reported.

"We noted that the gift is reportable at the time of donation, not distribution; and that the source is the donor, not the fund," said the OGE notes. "In other words, any donations to the fund totaling more than $390 that were donated while he was an employee must be reported."

Considering Pruitt’s legal defense fund was not active until 2018, its donors, if they gave before he left EPA, would be disclosed as gifts on Pruitt’s termination report, or his last public financial disclosure report. That report is now expected to be filed this November.

The Campaign Legal Center obtained the OGE records under the Freedom of Information Act. Delaney Marsco, ethics counsel for the group, said contributions to Pruitt’s defense fund should be reported.

"If this individual is a public filer, like Pruitt would be, he would have to report the gifts to the legal defense fund on his annual disclosure report," Marsco said.

She, however, expressed concern that Pruitt would manage somehow to avoid disclosure. Marsco cited a note by Kevin Minoli, then EPA’s top career lawyer and senior ethics official, on Pruitt’s 2017 financial disclosure report that he could only take disclosures at "face value" from a filer like Pruitt.

"We have seen Pruitt have an indifferent attitude to government ethics," Marsco said. "That makes me hyper-vigilant to see what he reports."

In addition, a 527 group like Pruitt’s legal expenses trust created by Mitchell would have to disclose its contributors under IRS rules.

Other 527 organizations have been formed to serve as legal defense funds and have shared their donors. The Wall Street Journal reported that the Patriot Legal Expense Fund Trust, set up to help President Trump’s associates with legal fees from special counsel Robert Mueller’s Russia investigation, had raised over $200,000, including from donors like natural gas giant Continental Resources Inc., led by Harold Hamm, its CEO and a Trump adviser.

In her November email to OGE, Mitchell explained that she had been retained to set up the defense fund to help pay legal expenses from a bar complaint alleging her client violated the professional code because he had "previously filed suit against the agency" he had joined.

Pruitt did have a bar complaint filed against him when he was EPA chief, but what Mitchell described in her email appears to be different than that grievance.

That complaint, filed by the Center for Biological Diversity and University of Oklahoma law professor Kristen van de Biezenbos in March last year, alleged that Pruitt violated professional conduct rules by saying at the hearing that he only used his work email for official business as Oklahoma attorney general. Pruitt would later clarify his testimony that he had used personal email for work.

Mitchell did not offer any more details on the bar complaint she described in her email to OGE, other than to say it has since been dismissed.

"I will respond only to your question regarding the bar complaint(s). The bar complaint(s) were investigated together and are essentially the same. Not different. And they were both dismissed a couple of months ago and the matter(s) are now closed," Mitchell said in an email to E&E News.

"As I said, the bar complaint(s) were essentially the same, indistinguishable, were merged and all have been reviewed and dismissed. There are no further matters pending before the [Oklahoma] Bar Association involving Mr. Pruitt."

In July 2017, Sen. Sheldon Whitehouse (D-R.I.), who sits on the Environment and Public Works Committee, sent a letter to the Oklahoma Bar Association with additional information to supplement the group’s complaint. CBD would also add more information to its complaint, sending amendments to its grievance.

Despite their efforts, Pruitt would not be sanctioned by his home state bar. The Oklahoma Bar Association said in a letter this July that it had dismissed the complaint.

Gina Hendryx, general counsel for the Oklahoma Bar, said, "The factual circumstances of your grievance did not warrant further investigation or disciplinary action."