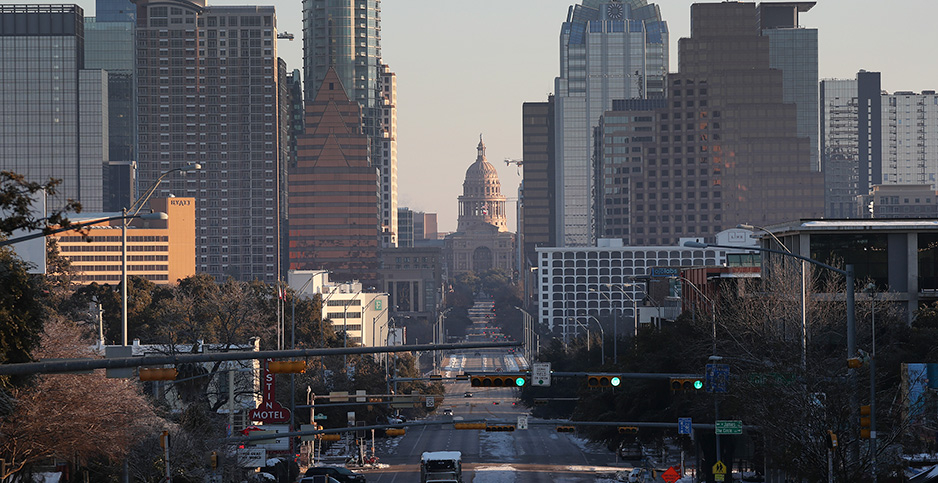 Documents from the Public Utility Commission of Texas, which is based in Austin, show how early state leaders were dealing with gas issues in February. The Texas Capitol is pictured in this Feb. 19 photo. Joe Raedle/Getty Images

Texas’ electricity leaders were deeply focused on natural gas shortages days before blackouts crippled the state in February and plunged the state’s power industry into chaos, according to documents obtained by E&E News.

A phone log shows more than 100 calls to or from DeAnn Walker, then-chair of the Public Utility Commission of Texas, discussing gas curtailments. It begins Feb. 10 — well before massive power outages started on Feb. 15 — and runs through Feb. 19.

Walker spoke to everyone from the chief of staff of Texas Gov. Greg Abbott (R) to power company officials. During the cold blast, Abbott promoted fossil fuels and blamed renewable energy before walking back some of that criticism.

The PUC records provide a more detailed picture of how concerned state leaders were about the natural gas industry prior to and during the crisis. While gas is crucial to keeping the lights on in Texas, the industry’s powerful lobby has successfully avoided new regulations on its operations for years. The documents also show concern from Texas legislators that electric grid managers didn’t push the industry hard enough to weatherize the system after a 2011 storm that caused rotating power outages.

At least 151 people in Texas died in the wake of the winter storm that led to widespread power outages, according to a state tally. Millions of people lost access to clean tap water as treatment plants lost electricity, and there was widespread property damage from frozen pipes.

While numerous wind facilities had issues in Texas, gas-powered generation had the most megawatts of generating capacity offline of any resource during the February power crisis, according to the Electric Reliability Council of Texas, whose region includes about 90% of the state’s power load.

Walker’s diary of her daily activities — included with a letter to state lawmakers — shows she briefed Abbott’s office and legislative leaders about gas shortages on Feb. 10 and Feb. 11. She also talked frequently during the energy crisis with Vistra Corp., according to the documents, which were released through a Texas Public Information Act request. Vistra is Texas’ largest power producer.

On Feb. 10, "I received information from Vistra Corporation that they had received notices of gas curtailments at several power plants. I notified the Governor’s office and Chairman Hancock about the information from Vistra," she wrote, referring to state Sen. Kelly Hancock, the Republican chair of the Senate Committee on Business and Commerce. Hancock did not respond to a request for comment.

On Feb. 15, as the state’s main electric grid began to experience blackouts, Walker said she briefed the governor’s office about another problem — the power outages were affecting natural gas facilities, forcing them to shut down and cut off fuel to power plants.

Despite the briefing, Abbott told Fox News on Feb. 16 that the outages showed the dangers posed by the Green New Deal, a Democratic energy proposal that hasn’t been enacted (Climatewire, Feb. 17). Staffers for Abbott and Craddick did not respond to requests for comment this week.

The phone log portrays an ad-hoc effort to communicate as Texas’ power sector was headed for a failure that would leave more than 4 million homes and businesses without power for hours or days. It lists calls as well as some texts, emails and in-person events, such as a Feb. 13 press conference Walker attended.

By Feb. 13 and 14, which were a Saturday and a Sunday, a key representative of industrial power users said gas supply problems were on her radar.

"I became aware of the gas issues actually because the generators started calling me," Katie Coleman, energy counsel for Texas Industrial Energy Consumers, told E&E News recently. "They were trying to find out if we were experiencing the same issues at our facilities and trying to see if we had any gas under contract that they could buy from us because they were being told no."

Coleman said she also was getting calls that weekend from her group’s members as some were being told they couldn’t have gas for various purposes. She said she recalled some precautionary gas-related discussions before the weekend as well. Industrial users may reduce their power consumption during times with tight conditions and some can send electricity to the grid.

Walker said in her notes that there also was an effort to work with liquefied natural gas companies to reduce production.

"We moderated our electricity consumption and made the significant majority of gas we were unable to use — amounting to billions of cubic feet — available to utilities, pipelines, and power providers," Cheniere Energy Inc. said in a statement.

Before the power crisis, the Railroad Commission issued an order prioritizing gas delivery to utility companies and power generators that serve "human needs customers" like homes, hospitals and schools. Industrial users were given lower priority.

Walker did address some gas concerns during a Feb. 12 open meeting of the PUC, but the reference was fairly brief. She said Craddick was helpful in working through issues related to gas generation plants.

She then pivoted to talk about frozen wind turbines, adding that "we’re working already to try to ensure that we have enough power." But she said it was "taking a lot of coordination."

Abbott had appointed Walker to the commission, but ultimately she and two other PUC members resigned following the blackouts as controversy swirled. Two new Abbott-appointed members have since joined the commission. It has three seats, though that could climb to five under pending legislation.

Some of Texas’ biggest power producers have been calling for more coordination with, and weatherization of, the gas industry in the state. Mauricio Gutierrez, the CEO of NRG Energy Inc., said recently that "the entire system, including natural gas, needs to be hardened as they say from wellhead to lightbulb."

Most of the legislators, power companies and state officials that Walker spoke with didn’t provide detailed comments to E&E News this week when asked about their discussions with Walker. The former PUC chair also didn’t provide a statement through the agency.

Andrew Barlow, a spokesman for the PUC, said in a statement that Walker "worked tirelessly during the grid event, coordinating with decision makers across industry, agencies and government to solve problems revealed by the unprecedented strain on the system."

The documents released by the PUC also show Texas legislators’ concerns that the state’s primary grid operator didn’t do enough to make sure facilities were weatherized after the storm-driven 2011 power outages. Those outages, while not as severe as this year’s, were largely blamed on the same problems, including poor communication and freezes at gas facilities.

"Rolling blackouts and power outages that spread throughout Texas’ power grid in both hot and cold weather would also seem to demonstrate the current administration and oversight board possesses insufficient imagination or resources to properly assess and plan for the capacity needs of our critical electrical infrastructure," Harless said.

Some power providers pushed back against efforts to write weatherization standards in 2014, state Rep. Matt Shaheen (R) wrote Feb. 28 in an email to Luis Saenz, chief of staff in the governor’s office.

"My bottom-line view is that the regulatory agencies, although they had their faults, were directing the utilities to have Emergency Operations Plans so that they would be prepared for an extreme weather event," Shaheen wrote. "The [utilities’] planning for such an event was insufficient and ERCOT audited and concluded the Emergency Operations Plans were sufficient, which was an error."

In response to the criticism, ERCOT said in a statement this week that it looks forward to working with lawmakers on potential changes.

Brad Jones is ERCOT’s interim CEO. He replaced Bill Magness, who was fired as chief executive after the blackouts. A number of ERCOT board members also resigned, and lawmakers are considering legislation that could alter the board’s makeup.

Still, the Texas Legislature’s energy reforms remain a work in progress. Efforts that have seen support in both chambers include plans for an annual audit related to ERCOT and work by regulators on a process to designate certain natural gas facilities as critical in an energy emergency.

But it’s not clear that tough weatherization of the gas system will be enacted despite the February crisis (Energywire, May 12).

An amended version of S.B. 3, a key bill meant to address power failures and weatherize generation, could impose penalties for companies that don’t prepare energy assets for weather emergencies. But it seeks to narrowly target gas facilities linked to the electricity supply chain instead of the broader gas system.

The penalties in the bill, while ranging as high as $1 million, aren’t high enough to faze large energy companies, Virginia Palacios, executive director of the government reform group Commission Shift, said in an email.

The bill has already passed the state Senate and it passed out of the House Committee on State Affairs this week. A new section of the legislation endorsed by the House committee could benefit "dispatchable" generation tied to fuels such as gas, coal and nuclear.

Lawmakers are working to pass various changes before the end of the regular state legislative session on May 31. A special session is also possible.

"Any priority legislation that seeks to prevent a tragedy like this from happening again needs to be amended to protect the lives and livelihoods of Texans," Palacios wrote.