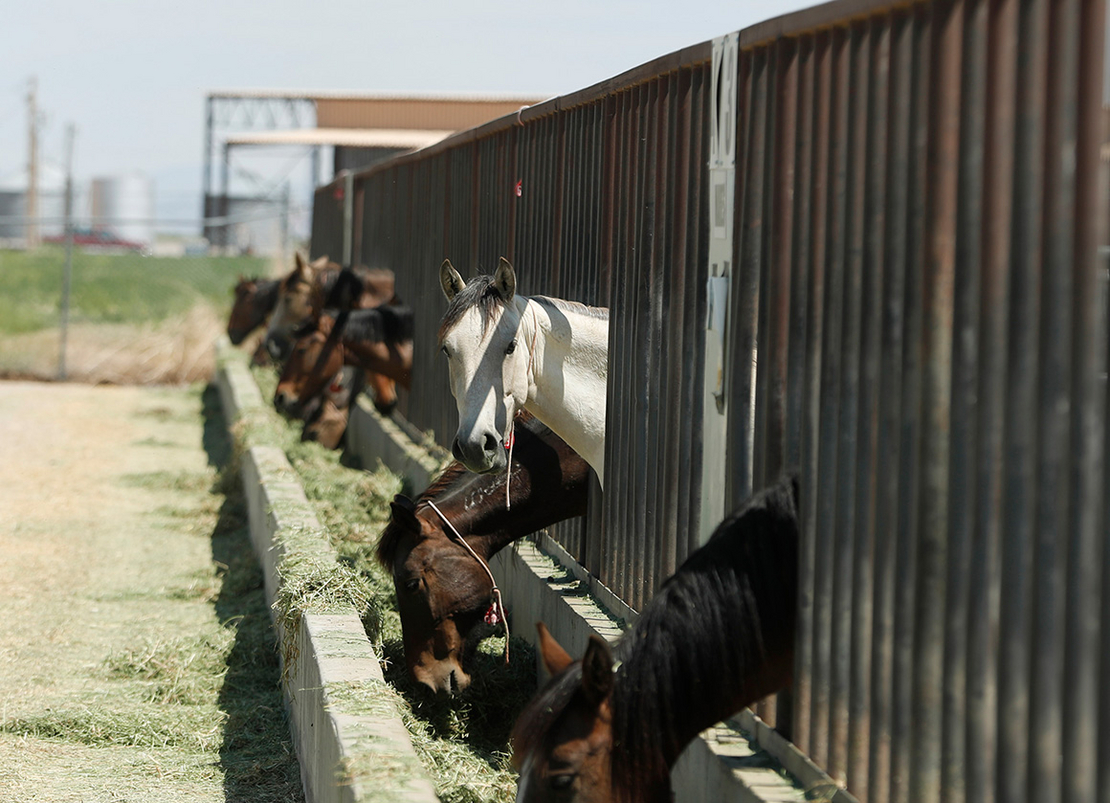 Wild horses are fed in a holding/adoption facility in Delta, Utah, in 2017 after being rounded up.. George Frey/Getty Images

There’s more trouble on the horizon for the Bureau of Land Management’s embattled wild horse and burro adoption incentive program.

The American Wild Horse Campaign today released a report the group says shows that since 2019 at least 840 animals removed from federal rangelands, placed into holding pens and corrals, and adopted into private care were later sold at livestock auctions that included known buyers from slaughterhouses in Canada and Mexico.

AWHC says it obtained documents through the Freedom of Information Act and from affiliated wild horse rescue groups that attended the auctions.

The documents provide “irrefutable” evidence that BLM’s adoption incentive program has allowed “a flood of wild, untrained mustangs and burros” to be sent “into the slaughter pipeline,” said Amelia Perrin, AWHC’s investigations manager.

BLM did not provide a response to the new report as requested by E&E News prior to publication of this story.

BLM has in the past defended its popular pay-to-adopt program, which offers $1,000 to people who adopt one of the nearly 60,000 wild horses and burros removed from federal rangelands and held in off-range holding corrals and pastures.

Participants receive $500 upfront and an additional $500 per adopted animal a year later, after a follow-up review determines the adopter is properly caring for the horse or horses and title has been transferred to the private party.

Since the program started in late 2019, it has helped adopt more than 8,200 wild horses and burros into private care.

The ‘tip of the iceberg’

BLM last year made adjustments to the program, including implementing administrative steps to better screen adoption candidates and to help ensure that wild horses and burros transferred into private care through the adoption program are not later sold at auctions with known kill buyers in attendance. BLM also visits adopted animals six months after adoption, instead of 12 months later (Greenwire, July 27, 2021).

The agency changed its approach after slaughter claims were first raised by wild horse advocates last year and later detailed in a New York Times story that estimated potentially “truckloads” of adopted animals were later sold at auction (Greenwire, May 17, 2021).

But those administrative steps are not working, according to AWHC.

Of the 840 “BLM-branded wild horses and burros identified in kill pens,” the group says it confirmed that at least 312 of them were “adopted through” the incentive program.

As for the fate of these wild horses and burros, the report states, “The whereabouts of these animals remain unknown.”

The AWHC report “identified 24 groups of related individuals” that it says have adopted multiple wild horses and burros “to the same address, then flipped all the animals to kill pens as a group after receiving the full incentive payments” of $1,000 per animal.

“At least 130 BLM wild horses or burros were sent to kill pens as part of such coordinated schemes,” netting these groups of related individuals “up to $30,000 from incentive payments and auction fees from the first round of AIP adoptions,” the report says.

The adoption incentive program “is routinely being defrauded by adopters who, after receiving title to their animals, are pocketing the cash incentives, then promptly sending their wild horses and burros to livestock auctions, known as kill pens,” according to the report.

“It’s important to note that the statistics contained in this report represent the tip of the iceberg, as many kill pens directly ship horses and burros to slaughter without advertising them,” the report adds. “The true number of wild horses and burros entering the slaughter pipeline as a direct result of the AIP is likely much larger than what AWHC’s investigation has uncovered to date.”

Last year the group said it sent Interior Secretary Deb Haaland documents linking adopted animals to auctions with known kill buyers. Now the group is repeating its call for BLM to stop cash incentives and instead use vouchers for veterinarian services or other incentives.

Advocates are also calling on BLM to increase inspections of adopted animals before they are turned over into private care, and to screen adoption candidates for past violations of the program.

“These changes are critically needed to stop the flow of wild horses and burros into the slaughter pipeline,” Perrin said.

The AWHC report is just the latest potential trouble for the adoption incentive program — a critical component of BLM’s efforts to reduce herd sizes on overcrowded rangelands.

BLM reported last year that it successfully adopted 7,369 wild horses and burros into private care in fiscal 2021 — the most in at least two decades (Greenwire, Nov. 24, 2021).

That’s partly the result of BLM gathering and removing thousands of excess wild horses and burros from federal rangelands.

The roundups have been working to reduce the numbers of wild horses and burros closer to the level BLM considers sustainable without damaging the rangelands, or placing the animals at risk of starvation or dying due to a lack of water — a growing concern as much of the West is experiencing extreme drought conditions.

Those roundups have continued in the current fiscal 2022 budget cycle, and BLM as of June was holding 58,517 rounded up wild horses and burros, mostly in off-range corrals and pastures.