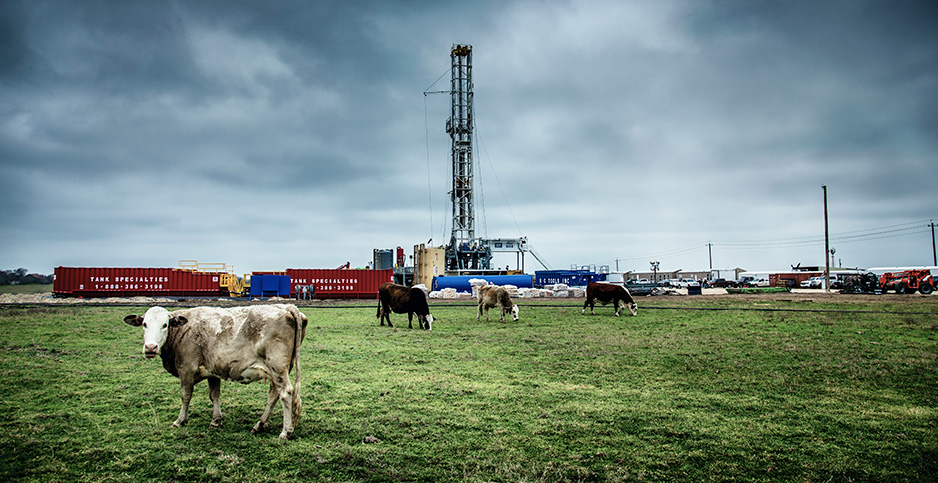 Newly revealed documents show that EPA in 2011 approved the use of certain fluorinated chemicals in drilling and fracking. Donald Giannatti/Unsplash.com

A notorious family of chemicals under intense EPA scrutiny may be present in oil and gas production after their approval by Obama-era regulators.

Documents obtained under the Freedom of Information Act by Physicians for Social Responsibility show that EPA regulators have expressed concern about per- and polyfluoroalkyl substances being used in energy production, including hydraulic fracturing.

A report out today examines the Obama EPA’s approval of three PFAS chemicals for use in oil and gas production, despite concerns among agency staff and indicators that the agency may have relied on "dubious assumptions."

Exxon Mobil Corp. and Chevron Corp. are among companies that have used either PFAS or chemicals that can degrade into PFAS in fracking at more than 1,200 wells between 2012 and 2020, according to industry records. Those activities occurred in Arkansas, Louisiana, Oklahoma, New Mexico, Texas and Wyoming.

"The evidence that people could be unknowingly exposed to these extremely toxic chemicals through oil and gas operations is disturbing," report author Dusty Horwitt said in a statement. "Considering the terrible history of pollution associated with PFAS, EPA and state governments need to move quickly to ensure that the public knows where these chemicals have been used and is protected from their impacts."

PFAS (which number in the thousands) are prized for their grease- and water-resistant properties, and are widely used in everything from household items to industrial firefighting foam. According to the Environmental Defense Fund, recent findings show they are also likely in common plastic packaging, bringing them into close contact with food. The revelations further public awareness about the extent of PFAS use at a time when the chemicals are facing fire from lawmakers and regulators.

According to the documents released to the advocacy group under FOIA, EPA reviewed the three proposed chemicals in 2010. At the time, regulators worried that the chemicals used could break down into compounds similar to PFOA — a type of PFAS that is no longer manufactured in the United States due to concerns about its health implications, including causing cancer. They also highlighted potential problems with disposal of the chemicals.

"EPA is concerned that these perfluorinated degradation products may be released to the environment from incomplete incineration of the PMN [premanufacture notice] substances at low temperatures," the agency wrote in a heavily redacted consent order.

The document went on to cite "preliminary evidence" that the chemicals could degrade upon use and become persistent, bioaccumulative and toxic, or PBT.

"EPA has concerns that these degradation products will persist in the environment, could bioaccumulate or biomagnify, and could be toxic (PBT) to people, wild mammals, and birds based on data on analog chemicals, including PFOA and [REDACTED]. The presumed perfluorinated degradants for these PMN substances include [REDACTED]."

But the agency signed off on the chemicals for use despite those misgivings.

Records indicate that the chemical giant DuPont asked for the approval, with reporting responsibility later passing to its spinoff, Chemours Co. A company spokesperson declined to comment but noted that Chemours was not in existence at the time of the initial approval request. Chemours has assumed significant litigation as part of the fallout from DuPont’s PFAS contamination, resulting in a $4 billion settlement in January (Greenwire, Jan. 22).

Limited publicly available information makes it challenging to know the exact substances used in oil and gas activities and the extent of EPA concerns. But the physician group’s report indicated that PFAS may have been used for decades in those operations.

Much of that usage would have come long before the 2016 overhaul of the Toxic Substances Control Act, which gave EPA renewed authority to crack down on chemicals. Advocates argue, however, that under the Trump administration, the government failed to take real action on PFAS.

The report asserts that the presence of PFAS in oil and gas processes could present major health risks, as well as environmental justice concerns. Fracking operations are disproportionately located near communities of color and low-income areas. Use of the chemicals in energy operations could also expose workers, another vulnerable group.

"In short, the health disparities that already exist in U.S. society combine with proximity to oil and gas operations to impose a disproportionate health burden on the poorest, the sickest, the young, the elderly, and people of color," the report states.

Revelations about the use of PFAS in fracking also coincide with another controversy around the chemicals involving the fossil fuel industry. In a now-infamous video circulated by the Greenpeace-affiliated journalistic outlet Unearthed, Exxon lobbyist Keith McCoy mentioned the company’s use of PFAS (E&E Daily, July 2).

McCoy said the company used trade organizations for lobbying purposes relating to PFAS. "[If lawmakers] start talking about how this is an Exxon Mobil chemical and Exxon Mobil is poisoning our waterways, the debate is pretty much over," he said.

Significant legislation cracking down on PFAS has been on the rise in both chambers of Congress, but with major opposition from lawmakers sympathetic to oil and gas interests (E&E Daily, June 24).

At the time of the video’s release, an Exxon spokesperson condemned the statements and asserted that the company does not manufacture PFAS but does use the compounds in some products, like wire insulation and computer components. Both Exxon and Chevron, two of the companies singled out in today’s report, did not respond to requests for comment on the new findings.

Bethany Aronhalt, a spokesperson for the American Petroleum Institute, acknowledged use of the chemicals in a statement today.

"Although PFAS is not widely used in fracking and only at extremely low levels, API will continue to review available data and analyses to better understand and mitigate the use of these chemicals across the upstream segment," Aronhalt said. "We uphold longstanding procedures to transport, handle, and use chemicals safely, including well-bore integrity, chemical containment, science-based hazard assessments and other operational practices, and we will continue to use science-based measures to further protect health and safety."

The Biden administration has repeatedly pledged that PFAS are a "top priority," and EPA Administrator Michael Regan has launched a PFAS council committed to finding a regulatory solution.

Under Regan, the agency is moving forward with developing drinking water regulations for the two most researched PFAS: PFOA and PFOS. EPA is also mulling hazardous substance designations under federal Superfund law for those two chemicals, among other proposals aiming to target the wider family (E&E News PM, June 10).

But the report takes aim at the agency, declaring EPA’s regulation of the chemicals to be "lax."

Despite its own findings about potential dangers, the group said, "EPA did not issue any requirement that follow-up testing be performed to see if the breakdown of the chemicals took place. Neither did the agency call for tracking to determine where the chemicals were being used, or if these substances were contaminating the environment as the agency had feared. Nor did it require that use of the chemicals be prohibited within a certain distance of drinking water sources, homes, or schools."

Moreover, the report maintains, EPA seemingly made assumptions that the approved chemicals would be less bioaccumulative in people than PFAS like PFOA. Despite agency recommendations that multiple additional tests be performed, the report found no indication that all of the proposed health studies had occurred. EPA provided the group with some data that didn’t appear alarming, but also did not seem to show testing for degradation products — the chief focus of concern.

In response to a request for comment, an EPA spokesperson said the agency "is developing a multiyear strategy" to address PFAS issues, including changes to reporting requirements and pending regulations. "Over the past few years, science has progressed rapidly, and the agency is moving forward with actions that are based on this new science and a better understanding of the complex challenges so many communities are facing," the spokesperson said via email.

Linda Birnbaum, a toxicologist and former director of the National Institute of Environmental Health Sciences, similarly said the possible use of PFAS in oil and gas operations was disconcerting. "There is essentially limited to no disclosure of what is used at [fracking] sites," Birnbaum said. Given the health risks associated with PFAS, she shared concerns about implications for people and the environment. "These chemicals are forever," she said.

"President Biden himself pledged during the campaign to halt new fracking on federal lands. Meanwhile, this administration is approving new fracking permits at a pace similar to Trump, with no letup in sight," Hauter said. "The Obama-Biden administration approved the use of toxic PFAS chemicals for fracking a decade ago, and all these years later, Biden’s practices haven’t seemed to change a bit."