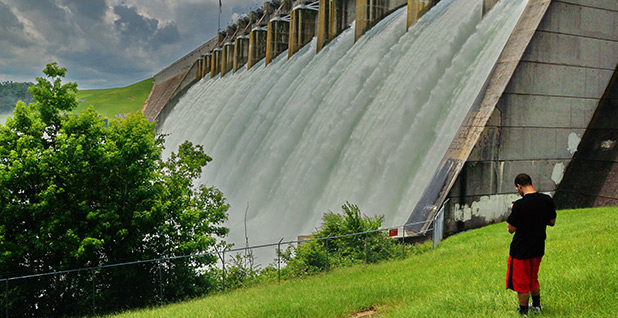 A new coalition is aiming to rejuvenate growth in hydropower generation, emphasizing it as a key tool for decarbonization. The Hartwell Dam in Georgia is pictured. Army Corps of Engineers/Flickr

Brokered by former senior energy officials and Stanford University experts over the past 2 ½ years, the collaboration represents a kind of truce between the hydro industry and green groups that have long opposed the electricity source. Its members include the National Hydropower Association and conservation groups like American Rivers and the World Wildlife Fund. The effort has also caught the attention of the Energy Department and the Army Corps of Engineers, which participated in talks but didn’t sign onto the agreement.

In a letter sent to congressional leaders, federal energy officials, states and tribal leaders, the 12 signatory groups said they had come together around a series of priorities.

Those include supporting the industry’s growth — like building new hydro plants on some dam sites and updating existing facilities — as well as pursuing conservationist priorities like the removal of unsafe and environmentally harmful dams. New "closed-loop" energy storage capacity, which unlike traditional kinds of hydro storage doesn’t require the construction of dams, should also be developed, the groups wrote.

"Our shared task is to chart hydropower’s role in a clean energy future in a way that also supports healthy rivers," they wrote.

The group is seeking to recruit additional members — including Native American leaders, who the letter said were "not adequately represented" in the dialogue — as it maps out its next steps.

It may also morph into an advocacy coalition with lobbying muscle.

Such a coalition could pursue tax credits; federal grants for innovative hydro projects and dam rehabilitation; private-sector partnerships; and policies to support "renewable energy, river conservation, and public safety," according to the agreement.

Its lobbying work could resemble that of the Carbon Capture Coalition, which has brought together traditional rivals around the goal of capturing carbon dioxide emissions from fossil fuels, said Dan Reicher, a former Clinton administration energy official and senior research scholar at the Stanford Woods Institute for Environment who helped convene the hydropower collaboration.

"The vision I painted for folks was, well, maybe there’s a possibility of doing something similar," he said.

How much new hydropower?

The rapprochement between the hydro industry and conservationists comes as several states, particularly in the Northeast, turn to the resource as a way to meet climate goals.

Canadian hydro utilities have leapt at the chance to boost their U.S. presence, spending big to convince states like New York that the resource can deliver low-carbon generation that would complement intermittent wind and solar.

Hydro lobbyists have also linked arms with their peers from the wind and solar industries. In June, the National Hydropower Association formed a partnership with the country’s largest wind, solar and energy storage trade associations, agreeing to advocate for a majority renewable power system by 2030.

Under that plan, hydro would largely remain a bit player as a source of generation, with its share rising from 7% in 2019 to 9% in 2030. But it would become a key fallback for the grid, with pumped storage capacity rising from 23 gigawatts to 40 GW over the same period.

On paper, the hydropower industry has room for growth as a generation resource, even without building new dams.

Only about 2,500 of the country’s 90,000-plus dams also host power production, according to the collaborative. And one 2016 study from the Energy Department found that hydro capacity could rise from that year’s 101 GW to almost 150 GW by 2050.

But the industry may face constraints that solar and wind developers don’t, ranging from high costs and permitting obstacles to local environmental impacts and an ugly history of displacement of Indigenous groups.

"I’m not going to sit here and tell you we’ll be adding vast amounts of hydro generation in the U.S.," said Reicher. "What this dialogue is about is how to better use existing hydro capacity, both generation and storage, and add some amount more — but most importantly, how can you best use existing capacity to integrate solar and wind?"

One model for the groups’ future work, they wrote, is a 2004 agreement struck in Maine between the Penobscot Nation, hydro interests, environmentalists, and state and federal agencies.

Under that deal, the state ended up removing several dams and retrofitting others, leading to an increase in hydropower capacity while improving fish habitats and dam safety, they said.

One lingering question the groups plan to explore is how much greenhouse gas is emitted from existing impoundments. Scientists from DOE, Oak Ridge National Laboratory and the Environmental Defense Fund have launched a study intended to "better characterize the ranges and areas of uncertainty in estimating emissions from U.S. reservoirs, lakes and rivers," including those featuring hydroelectric facilities.

The groups will also look into how policies at the Federal Energy Regulatory Commission, which oversees large hydro projects, might be changed in order to reward the electricity resource’s value to a wind- and solar-heavy grid, said Reicher.

But much will depend on federal lawmakers, tax appropriators and the White House’s next occupant, he added.

"I don’t want to overstate the political side of it," he said. "But federal agencies are key, especially DOE. … We’ll have to see who’s running those agencies come November."

Clarification: An earlier version of this story said the hydro collaboration has the "blessing" of the Energy Department and the Army Corps of Engineers. The story has been updated to clarify that these agencies participated in talks but did not sign onto the agreement.