DOE could use wartime law to help coal. Here’s how it works 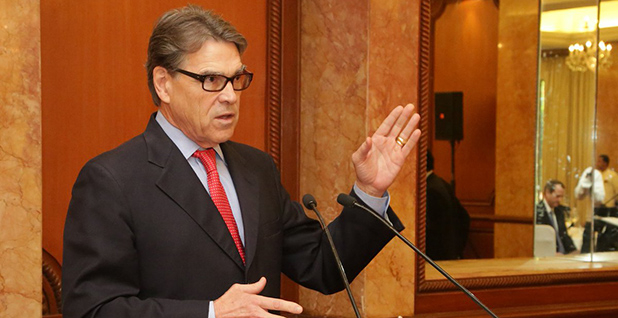 Energy Secretary Rick Perry is getting creative when it comes to helping the coal industry. @USAmbIndia/Twitter

Invoking a Korean War-era law to aid struggling coal and nuclear units would represent a dramatic expansion of the Trump administration’s campaign to rescue the industry, lobbyists and analysts said yesterday.

The Department of Energy is reportedly weighing use of the Defense Production Act of 1950 to prevent the retirement of ailing coal and nuclear units at the request of Sen. Joe Manchin (D-W.Va.). The law gives the president broad powers to require businesses to prioritize contracts for materials deemed vital to national security. Bloomberg first reported on DOE’s plan.

Then he added, "It is not the only way."

DOE officials did not respond to multiple requests for comment yesterday, but industry sources familiar with the administration’s plans said the idea is being actively considered and that an interagency process is underway.

"It goes to the highest levels of government," said one source opposed to the idea. He likened the move to something "they do in Venezuela," adding, "It’s one thing to put a thumb on the scale. This is like putting an anvil on the scale."

The sources stressed that no final decision had been made.

"The whole idea raises a lot more questions than it would answer," said another industry source, who added that the concept is one of several that DOE sent to the White House for consideration to aid ailing nuclear and coal-fired power plants.

Among the questions those efforts raise: Who would pay for it? Would the federal government nationalize power plants or compel grid operators to accept their power? And would doing so require new congressionally approved authorization or spending?

"It sounds like they’re getting creative," a source close to the administration said.

The national defense argument is just the latest in a series of efforts to rescue the faltering coal industry, one of the president’s key campaign promises that helped propel him to victories in coal-heavy states.

A proposal to pay coal and nuclear plants for storing fuel on-site was shot down by the Federal Energy Regulatory Commission.

Administration officials have argued that the country is facing an emergency in its power sector. As coal and nuclear plants retire, America becomes increasingly vulnerable to extreme weather events like the polar vortex of 2014 and the deep freeze experienced by much of the country this winter, they say.

Those arguments have drawn strenuous objections from grid operators, the oil and gas industry, and environmentalists. They contend that concerns about the country’s power sector have been greatly exaggerated.

The Defense Production Act was passed during the Korean War to ensure the U.S. industrial base could meet the needs of the American war effort. It was later used during the California energy crisis, when the government compelled natural gas suppliers to fulfill contracts with the then-ailing Pacific Gas and Electric Co. The idea was controversial at the time.

In a 2001 hearing about the law’s use during the crisis, then-Texas Sen. Phil Gramm (R) said, "The Defense Production Act is the most powerful and potentially dangerous American law, in my opinion."

The law was amended in 2009 to restrict its use, said Susan Tierney, a former DOE official in the Obama administration. Two provisions require the law to be limited to scenarios where a scarce material is essential to national defense or to instances where national defense requirements cannot be fulfilled without disrupting civilian markets.

"I believe this is an enormous stretch, and it would surprise me if lawyers in other administrations would find this a valid use," Tierney said. "It would not surprise me in terms of people going to the drawing board to a statute searching for a solution of where they can hang their hat on."

Much of the administration’s efforts have centered around the PJM Interconnection, a wholesale electric market encompassing much of the Mid-Atlantic and Rust Belt. The once coal-heavy region has seen a rapid shift toward natural gas in recent years.

In a statement, PJM officials signaled they saw no threat to the grid’s reliability in the shift. They noted that 10,000 megawatts of new generation is under construction or in the review process to connect to the grid, in a sign the market is working as intended.

"We believe that a market-oriented approach consistent with the American free-enterprise system offers better results than government-mandated subsidies," said PJM spokesman Jeff Shields. "PJM system has adequate power supplies in operation today. Going into the summer, we have much more power available (thousands of megawatts) more than is required by conservative standards, and resources are more diverse than they have ever been."

Clarification: PJM’s response has been updated. An earlier version of the story said the grid operator saw no threat to national security in the shift from coal to natural gas. PJM officials say national security is outside their purview.