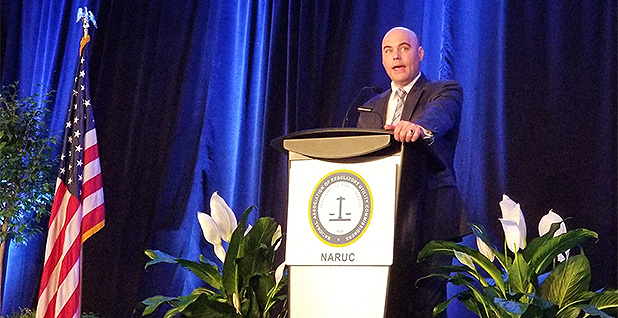 The Department of Energy official at the forefront of the Trump administration’s grid reliability efforts offered caution today to the progressive push to reach 100 percent renewable energy within 10 years in response to a question about the "Green New Deal."

"I started my career as an engineer, so one of the things I’m happy to say is you can’t legislate physics," DOE Assistant Secretary for the Office of Electricity Bruce Walker told the National Association of Regulatory Utility Commissioners at its winter conference in Washington, D.C.

Walker’s comments come as Democrats remain divided over the plan, and as Republicans continue attacking it and its backers.

Advocates of the resolution want Congress to transition the country to 100 percent clean energy, although the text of the resolution was not specific on the generation mix needed to achieve that. The plan is likely to use some combination of wind, solar and storage technologies (Greenwire, Feb. 7).

Opponents argue such a quick transition would cost trillions of dollars while introducing uncertainty about grid reliability because of the intermittent energy production of renewable technology.

That issue, as well as concerns about cyberthreats to natural gas delivery, has driven Trump administration policy considerations to prop up uneconomic coal and nuclear plants to ensure grid resiliency during extreme weather events.

"I would offer that with those who are thinking that you are going to turn our system to 100 percent renewables in 10 years, I would offer that engineering is a great science and I think people need to actually do the analysis that is necessary to determine what level of renewable penetration would be viable from a resiliency and/or a reliability standard," Walker said.

The Office of Electricity, Walker said, is looking at that proper level as part of a broader effort to outline the interdependencies of the electric grid, dubbed the North American energy resiliency model.

And with the shrinking costs of energy storage technology, the downsides of renewables may not be as far off as critics are warning.

It remains unclear if Congress will take up the "Green New Deal" resolution, or if other committees with jurisdiction over climate issues will take a different approach.

Either way, Walker said he is willing to testify about the need for analysis into the real-world consequences of such a drastic change.

"As Congress takes a look at that bill, I would encourage them — and if I have an opportunity to testify on it — that we need to do the electrical engineering analysis and then work with the oil and natural gas and electric sector through our coordinating councils to really understand what the impact of something like that would be," Walker said.

The lack of significant congressional action on the resolution hasn’t stopped Walker’s boss from weighing in. During a campaign rally in El Paso, Texas, last night, President Trump attacked the idea as "a high school term paper that got a low mark" (E&E Daily, Feb. 12).

"It would shut down American energy, which I don’t think the people in Texas are going to be happy with that," Trump said.

Clarification: An earlier version of this story suggested the "Green New Deal" called for a transition to 100 percent renewables within a decade. A recently introduced resolution of the deal does not include that provision.