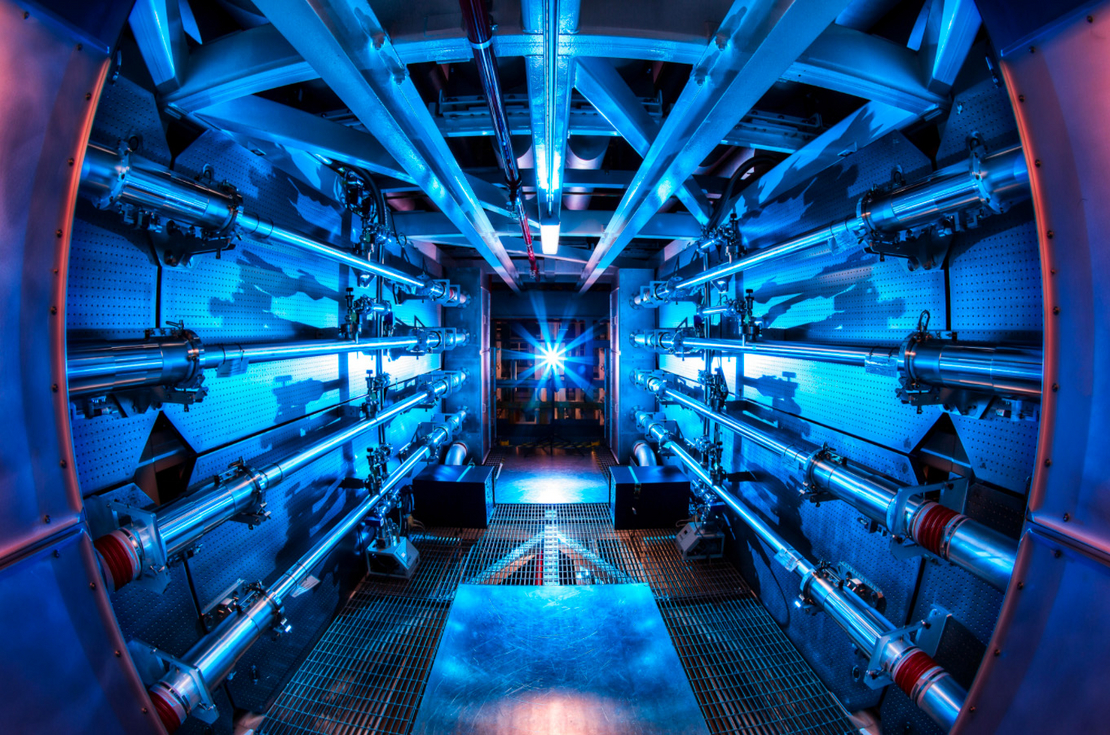 A color-enhanced image of the inside of a preamplifier support structure at the National Ignition Facility. Damien Jemison

Scientists at a Department of Energy national laboratory are reporting a significant milestone in their pursuit of the distant quest to generate limitless, carbon-free electricity from fusion energy reactors.

The researchers at DOE’s National Ignition Facility at Lawrence Livermore National Laboratory used a barrage of beams from the world’s most powerful laser to fuse hydrogen atoms together in a “burning plasma” reaction — a key threshold in reaching carbon-free fusion. They reported details in the journal Nature Physics this week, following a series of experiments in 2020 and last year that achieved more powerful sustained reactions, if only for fractions of a second.

“In these experiments we achieved, for the first time in any fusion research facility, a burning plasma state where more fusion energy is emitted from the fuel than was required to initiate the fusion reactions, or the amount of work done on the fuel,” physicist Annie Kritcher said in a statement from the national laboratory.

Kritcher, in an interview with E&E News, noted that the next objective is to reach a self-sustaining “ignition” phase with fusion. That phase occurs when the tritium-deuterium fuel in gaseous plasma form will continue to burn on its own after the reaction begins, putting out more energy than the initial reaction requires, the NIF project leaders say.

“There is no date on the calendar” for that, Kritcher said. “We’re making best attempts to try to improve things over the next year.”

Theoretically, fusion holds the potential to power the Earth with limitless carbon-free energy, using the same nuclear reaction powering the sun and the stars.

Yet daunting scientific and engineering challenges lie ahead to produce fusion energy as an affordable technology for utility-scale reactors, experts say. Two panels of U.S. fusion scientists are pressing Congress — so far unsuccessfully — for funds to build a pilot fusion reactor by 2040 that could reveal fusion’s commercial prospects.

The Lawrence Livermore team often has operated in the shadow of the massive International Thermonuclear Experimental Reactor (ITER) under construction in southern France, as part of a partnership between more than 30 countries, including the United States.

The NIF relies on an implosion process of almost unimaginable complexity to create a burning plasma. A beam from the NIF’s laser is channeled along a 5,000-foot path and vastly magnified by lenses before it is directed at a gold-lined fuel capsule less than a half-inch long. An instantaneous reaction follows enormously compressing, or imploding, the fuel until it achieves concentration that sustains a burning plasma condition.

Kritcher described a series of experimental “fixes” made between each of the laser tests in the series that involved both science and intuition. The duration of the laser pulse was extended and the design of the fuel chamber was modified, among the changes.

“We learned where we could and could not trust the modeling and when to rely on semi-empirical models,” Kritcher said. “

Confirming the reaction’s success required a large contingent of lab scientists who developed methods to infer indirectly what was happening at the central “hot spot” of the reaction. The laboratory said the analysis was “overwhelmingly likely” to have validated the recent experiments’ outcomes.

ITER will use the world’s most powerful supermagnets in creating a magnetic field designed to be powerful enough to contain the burning plasma reaction within a doughnut-shaped reactor.

The reactor design, called by its Russian name tokamak, has been chosen by other government- and private investor-backed fusion projects. ITER is expected to attempt to create its first burning plasma in 2025 and full fusion in 2035.

Private fusion projects hope to beat that timetable by taking advantage of improvements in supermagnets and advanced computer modeling.

However, there is not a blueprint for how the NIF process might evolve into a utility scale fusion reactor, particularly with the cost and extraordinary precision the project’s laser shots now require, said Kritcher.

“This is fundamentally a research facility. We’re not focusing on the commercialization of the physics,” she said.